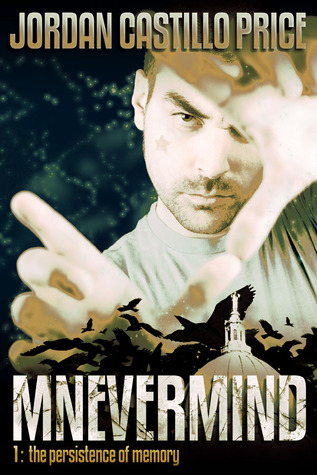 About the book:
Every day, Daniel Schroeder breaks his father’s heart.

While forgetting your problems won’t solve them, it does seem like it would make life a heck of a lot easier. Daniel thought so once. Now he knows better. He and Big Dan have always been close, which makes it all the more difficult to break the daily news: the last five years were nothing like his father remembers.

They’re both professionals in the memory field—they even run their own memory palace. So shouldn’t they be able to figure out a way to overwrite the persistent false memory that’s wreaking havoc on both of their lives? Daniel thought he was holding it together, but the situation seems to be sliding out of control. Now even his own equipment has turned against him, reminding him he hasn’t had a date in ages by taunting him with flashes of an elusive man in black that only he can see.

Is it some quirk of the circuitry, or is Daniel headed down the same path to fantasy-land as his old man?

My Review:
4.5 stars for this is SciFi M/M romance set in our world with a new technology, mnemography. Mneming (read: MEEM-ing) is the process of having a virtual reality experience, only a bit better. A mnem is a temporary memory implanted in a person’s brain.

Daniel Schneider, and his dad, Big Dan, own Adventureworks, a small mnemography studio in Madison WI. Daniel runs the show now, after Big Dan suffered a persistent mnem (replaced memory) testing out a program that Daniel had authored. Now, Big Dan can’t remember that he’s been divorced for five years and Daniel lives in shame over what happened to his dad. His confidence in mnem-coding is shattered and his business is failing. He works a second job for a competitor mnem studio to make ends meet, where he is friends with Larry.

Daniel is gay, and while guiding a client’s mnem, he meets another man in the mnem. This has never happened before–the guides (called sherpas) aren’t really a part of the program, they exist outside of it, but there is no doubt that the tall, pale man who recurs in another client’s mnem is real.

Okay, there’s some doubt. Daniel is constantly convinced he’s hallucinating, or worse–mneming–his stranger into existence. Larry is able to convince Daniel that the mysterious Elijah is real however. And they track down Elijah–to find he’s straight and autistic, but brilliant at mnem. His invention allows him to slip into running mnem programs as far as 100 miles away. While this is stunning to Daniel, he’s even more fascinated by Elijah. Daniel has never been one to fall for a straight guy, but there’s something curious about Elijah–and it seems likely that Elijah hasn’t had much experience with sex, at all, not just with male partners. They struggle to connect, on account of Elijah’s autism, but the manage to work it out…a bit.

I must say, I was thrilled by the world-building and character-development here. The world is much like ours, so it was easy to visualize, but the tech aspect was well-done. I really had the sense of the mnem a–to me they seem like VR. Big Dan was such a touching, tragic figure, perpetually defending his (estranged and ex-) wife’s absence, and urging Daniel to mend fences–only to be continually confronted with copies of his divorce papers. Tired, defeated Daniel struggling to keep his business running while scared he’ll mess up even more, facing his delusional father everyday and knowing his program upset the balance, he makes such a compelling character. Elijah and Larry are two scene stealers. Loved them. My only complaint is: more. I wanted MORE pages. I loved where this was going and didn’t want it to end.

As for the heat, there really isn’t much, but what there is, is deeply emotionally satisfying, IMHO. I want them to get together, for real. For keeps. They seem like a match intellectually, as well as physically. I received this book via Goodreads’ Don’t Buy My Love program in exchange for an honest review. I have the sequel loaded up on my iPad and can’t wait to work it into my reading schedule.

Interested? You can find THE PERSISTENCE OF MEMORY on Goodreads, Amazon, Barnes & Noble, and AllRomance.

About the Author:
Author and artist Jordan Castillo Price is the owner of JCP Books LLC. Her paranormal thrillers are colored by her time in the midwest, from inner city Chicago, to small town Wisconsin, to liberal Madison.

Jordan is best known as the author of the PsyCop series, an unfolding tale of paranormal mystery and suspense starring Victor Bayne, a gay medium who’s plagued by ghostly visitations. Also check out her new series, Mnevermind, where memories are made…one client at a time.

With her education in fine arts and practical experience as a graphic designer, Jordan set out to create high quality ebooks with lavish cover art, quality editing and gripping content. The result is JCP Books, offering stories you’ll want to read again and again.