Hi there! Today I’m sharing a review for a near-historical LGBTQ YA coming of age/coming out story from Jake Martinez. THE MIXTAPE TO MY LIFE features a closeted high school junior reconnecting with his middle school crush, who’d saved him from a beating years before. 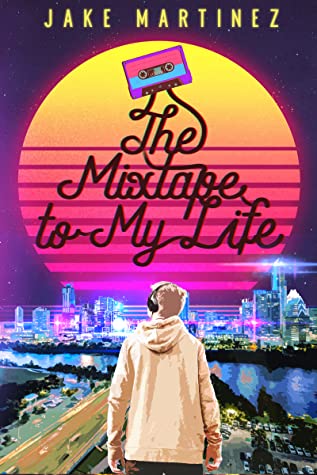 About the book:
Justin Ortega might as well be starring in his very own coming-of-age 80s movie. If only he could find his dream boy to pull up in front of his house in a red convertible and sweep him off his feet, already! At seventeen years young, he isn’t quite Mexican enough for his South Texas town; isn’t manly enough for his father; can sometimes be too much of a smart mouth for his mother; and as for the other kids at school—let’s just say he’d be cast as the quiet nerd with a heart of gold…and an ear for music.

The one solace Justin has is his love of 80s hair metal bands, which he listens to on his beloved Sony Walkman. The songs, lyrics, and melody keep him just sane enough to escape the pressures of school and help navigate the hurdles life brings. Especially with the doozy this year is shaping up to be. Not only does he have to try out for a captain position which is rightfully his, but his best friend has found a new girlfriend, leaving Justin to fend for himself in a school where he’s mostly known as simply Coconut.

Enter Dominic Mendoza. Sweet, funny, and a blast from his past, the hunky football player has moved in next door. Justin could never forget how Dominic protected him in the eighth grade, nor the way Dominic made him feel, then…and now.

Except, this isn’t a movie. Confusion, friendship, and love won’t guarantee a happy ending unless Justin can learn to accept himself for who he truly is. Hair bands and all.

My Review:
Justin Ortega is a high school junior growing up in South Texas in the mid-1990s. He’s sure he’s gay, and has come out to his best friend Benny, who is an ally. Justin’s father is a high school football coach, and his hard-line stances clash with Justin who is the definition of non-confrontational. There’s a culture clash with Justin’s Mexican-American parents, who are religious and highly suspicious of his friendship with Benny. They also don’t make light-skinned Justin, or his younger brother, learn Spanish–thinking it’s more American to only speak English. This leads to struggle with Justin’s bilingual Spanish-speaking peers who accuse him of “playing white” call him a “coconut”–brown on the outside and white on the inside.

It’s the end of summer, and Justin’s vying for the cymbal captain post in his marching band. Band’s usually a place where Justin feels safe, despite a trio of percussionists who are bullies, one who is his primary competition for cymbal captain. Justin retreats into his 80s rock mixtapes on his Walkman whenever he feels stressed. He’s a little frustrated that Benny has been secretly dating Lila, a fellow percussionist, for a month or more. He’s always liked Lila, but they were never really close. This relationship with Benny brings them far closer, and she’s an ally as well. Justin’s parents are SO happy to see that Benny has a pretty girlfriend, and they encourage Justin to find one too. He’s overwhelmed, knowing he can never please them this way.

Justin has had bullies plaguing him for years. One, Ivan, is a big football player and almost beat Justin up back in eighth-grade, openly accusing him of being gay–which Justin had not come to terms with. At that time Dominic, a fellow student, came to his rescue. Dominic’s father was a huge homophobe and pulled Dominic from the school, fearing that associating with Justin would turn Dominic gay. Now, three years later, Dominic’s parents are divorced and Dominic and his mom have moved into the house next door to Justin. Justin’s really excited to reconnect–he never forgot Dominic’s kindness, and has had a crush on him since that time.

Dominic is eager to build a friendship, and is really protective of Justin from the beginning. Their friendship is growing into something more–especially when Justin confesses his sexuality, and his attraction. Dominic returns these feelings–he’s suffered physical and emotional abuse from his father, which led to his parent’s divorce. His mom knows he’s gay, and she’s supportive, if confused. Dominic is still playing football, and now his coach is Justin’s dad. He’s pleased they are friendly–thinking that a burly offensive lineman like Dominic is a manly friend, and far better for Justin than Benny.

The drama in band continues, though, and it leads to a big crisis. Within the final two weeks of summer, Justin gets his first kiss, first kiss with a guy, a boyfriend, and a situation that sends himself, Benny, Dominic and Lila on the run–temporarily. Justin and his parents have conversations that needed to happen years before. They recognize that Justin is the boy he is, and they love him even if they don’t necessarily understand. And, their support is so needed by Justin, who’s life was careening out of control for a bit there. With all this love behind him, Justin is ready to stand on his own feet, stand up to the bullies, and be a stronger man for it.

For me, this one was very interesting. But, I’m a child of the 90s and I understood the many, many pop-cultural references that Justin and his friends experience. Corded phones, MTV showing MUSIC VIDEOS (gasp!), the songs that speak to Justin’s heart, what a “mix tape” is–these are touchstones of my youth, but I wonder how they resonate with kids now. The music, especially. None of the songs Justin refers to are in frequent play today–and even listening to them with my kids, they associate that with “listening to old music with mom” moments, not the poignant, life-affirming experiences that will trigger nostalgia later. Music, and its dissemination, has changed considerably in the last 30 years, and kids do not seem to have as many emotional connections to it as the people of Justin’s generation would have. It’s cute that the author has built a Spotify playlist of the tunes referenced, to guide his readers into it, but I’m not sure if it will have traction for young readers. I was also a little troubled by the writing, with tense shifts that happen constantly, sometimes within sentences, throwing me off.

Justin is sweet kid, a bit over-emotional at times, with a huge inferiority complex. He’s too light-skinned, not bilingual, and lacks the machismo to integrate well with his peers. His love of American rock music is another point of separation, not to mention his sexuality. Justin’s tendency to shut people out with his Walkman creates a further barrier to overcome in terms of connection. It is through opening up, with Benny, Lila and finally Dominic, that allows him to grow into a functional kid. He makes even more friends as as result, finding at least one friendly bisexual boy he can relate to, and another straight boy who doesn’t care about his sexuality. The moral seems that being honest, open and out will help Justin navigate his life. And, that’s a valuable idea in our current time. Justin and Dominic do recognize–and this is driven home by the parable of Justin’s Tio Mando–that they exist in a society where threats to them exist because of their sexuality. They are careful to whom they reveal themselves as safety measure, and that stands as a touchstone for teens who might have similar home or societal pressures even today. I liked the story, and would recommend it for readers who enjoy coming out stories and near-historical, teen gay romances.

Interested? You can find THE MIXTAPE TO MY LIFE on Goodreads, Deep Hearts YA, Amazon, Barnes & Noble, iBooks, Kobo and Smashwords. I received a review copy via NetGalley.

About the Author:
Jake Martinez is a former South Texas resident who has found a new home in Chicago. He has been writing all his life, but has only recently sought to be published. His debut novel, The Mixtape to My Life, reflects on life as a gay teen growing up in South Texas. Jake holds an MFA in Creative Writing and loves to write plays and screenplays. Aside form writing, you can find him hanging out at home with his husband, their newborn son, and an eclectic group of fur babies.