Hi there! Today I’m sharing a review for a new M/M contemporary paranormal romance from EJ RUSSELL. THE DRUID NEXT DOOR is the sequel to CUTIE AND THE BEAST, and the second book in the Fae Out of Water series. Each book follows the love story of one of the three brothers, high-ranking Fae of the Seelie court. In this cal Lord Maldywn (or Mal) find love with his tree-hugger neighbor—who turns out to be a druid. 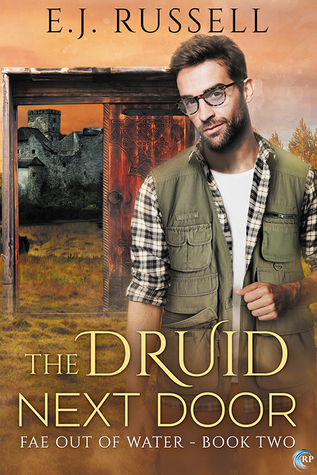 About the book:
Professor Bryce MacLeod has devoted his entire life to environmentalism. But how effective can he be in saving the planet when he can’t even get his surly neighbor to separate his recycling?

Former Queen’s Enforcer Mal Kendrick doesn’t think his life could get any worse: he’s been exiled from Faerie with a cursed and useless right hand. When he’s not dodging random fae assassins in the Outer World, he’s going toe-to-toe with his tree-hugging neighbor. And when he discovers that the tree-hugger is really a druid, he’s certain the gods have it in for him—after all, there’s always a catch with druids. Then he’s magically shackled to the man and expected to instruct him in Supernatural 101.

Until a mysterious stranger offers a drunken Mal the chance to gain back all he’s lost—for a price. After Mal accepts, he discovers the real catch: an ancient secret that will change his and Bryce’s life forever.

Ah, what the hells. Odds are they won’t survive the week anyway.

My Review:
Mal Kendrick was cursed while saving his brother’s life. He lopped off the hand of the Fae Seelie Queen’s consort–rotten though he was–and won’t gain the use of his own hand until he’s restored the Queen’s consort in full–not that she wants him back. So, he’s cut off from Faerie in the human realm, and feeling rather sorry for himself. Plus, he’s having the devil of a time fending off the lesser Unseelie Fae who seem to delight in tormenting him, the former Enforcer of the Queen, now that he’s got a bum right hand.

Bryce MacLeod has devoted hsi life to caring for the earth and building sustainable living spaces that allow development to accentuate nature, not obliterate it. Thus, he’s right torqued off when he sees his attractive but surly neighbor, Mal, tossing a bottle at the coyote taking refuge in the wetland that borders the gardens at the rear of the properties. What he doesn’t know is that the “coyote” was a glamour-sporting Unseelie polluting their land, and Mal’s about to open Bryce’s eyes in more ways than one. Turns out Bryce is an undiscovered druid, unknowingly raised in the arts by his grandmother, who passed several years before. When Mal’s brother-in-law David, from CUTIE AND THE BEAST, gets word of Bryce’s latent powers he enlists his dear friend, a Druid priestess, to help train Bryce.

And these life lessons are necessary because it seems the Unseelie and the Queen’s consort are now after the both of them. To hasten Bryce’s learning in all things supernatural, he and Mal are magically tethered to stay in close proximity. This makes things both awkward and sexy. For example, they gots to share a bed, because the distance from the sofa to the bed exceeds their tether length. When they do that, well, it hurts, bad. Awkward because Mal’s been recruited to aid another Fae in gaining his freedom from a different curse–and this dude, let’s call him Steve, claims to have he’ll have the power to undo Mal’s curse once his own curse is lifted. But, Mal’s sworn to secrecy over this opportunity, and he needs to connive and convince Bryce to walk into Faerie with him to complete Steve’s tasks.

So, it’s complicated, as is the attraction between Bryce and Mal. Mal’s usually a dominant lover, but Bryce has Druid Voice which can compel most any person to do his bidding. Is their kinky-times the result of true desire, or compulsion? That was a real dilemma and one that both Mal and Bryce faced together and alone. They seem to burn the sheets up, but neither man wants to continue if it’s not a real connection. Though, Mal’s super charmed by Bryce’s Mr. Fix-it nature, and how he helps Mal gain the ability to defend himself, and protect them both, from the Unseelie invaders. Their adventures to gain Steve’s tokens are dangerous and revelatory; Bryce gains a lot of power and insight when he steps into Faerie. His mission to stave off the pollution in his world and the rot growing in Faerie seem to be linked through the Queen, and he’s afraid Mal’s chicanery on behalf of Steve will lead to destruction of both realms. Yet, he can’t not trust Mal. He’s developed a real rapport over the course of their adventures, and he wants to see Mal returned to his uncursed state, even if it means Mal walks away.

For me, this second book really brought a lot more of the supernatural and lore into the world-building. The first book was fun and quirky, but Faerie was a realm to avoid. This time we’re in Faerie at least half of the book, so we get to understand the politics of the space, and the inter-relatedness of the human and Faerie realms. I did see the path the ending would take rather early, and was gratified that it came together in the manner I was anticipating. Mal and Bryce have some real discussions that lead to a strong bond, and a mutually beneficial relationship in the end. This book has more sexytimes than the first, and they were pretty randy. O.O I’m a fan, and I needed a fan. Speaking of fans, the third book features the third Kendrick brother, a revered bard of Faerie who sings in a band in the Human realm. Looking forward to seeing that stalwart soul find a new mate.

Interested? You can find THE DRUID NEXT DOOR on Goodreads, Riptide Publishing, Amazon, Barnes & Noble, iTunes and Kobo. I received a review copy via NetGalley.

There’s a three-tour wide giveaway of a $50 GC to Riptide Publishing, and you just need to head on over to my friend Joyfully Jay and comment on her post in order to be entered!
Good luck and keep reading my friends!

About the Author:
E.J. Russell writes romance in a rainbow of flavors — from M/F stories grounded in absurd contemporary reality to M/M tales splashed with the supernatural — but you can be sure that while the couple makes their way to HEA, they’ll never stray too far into the dark.