Hi there! As you know I’m a big fan of the speculative fiction of Susan Kaye Quinn. THE LEGACY HUMAN and THE DUALITY BRIDGE are some serious teen sci-fi/romance. That series is set in the post-Singularity world, where AI rule Earth and beyond. Today marks the release of STORIES OF SINGULARITY, short novellas that give the fans of the series a bit of insider info, and a sneak peek into the novels to come! 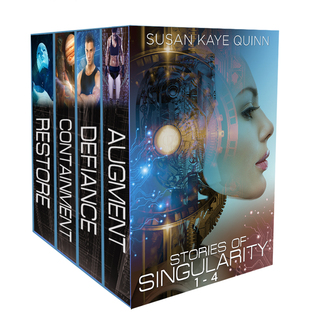 About the book:
Med Bots, Ascenders, Cyborgs… and a Legacy Human or two.
(Companion stories to the Singularity novel series.)

This box set of FOUR NOVELLAS (plus a bonus flash fiction) is set in the universe of Susan Kaye Quinn’s Singularity novel series. Learn why a med bot’s world is tragically different than you might imagine; how a machine intelligence might probe the limits of its constraint; and what dissenting humans might do with a cybernetic enhancement… or five. These short stories each provide a glimpse into a dark corner of the Singularity novels

My Review:
This is a series of four stories set in the author’s Singularity world. That means AI are not possible, they rule Earth, and apparently beyond. In these stories, humans have evolved into Ascenders, those which opted to digitize their consciousness into a world collective called Orion, and exist in host bodies that are wholly machine. There are plenty of low-sentience bots who due the menial work, and some smallish populations of Legacy humans, who are mostly kept alive for their genetic diversity. Two of the stories are told from a bot perspective, and two from humans. They are all unique and impart an understanding of humanity in the way Ascenders have long forgotten it.

The first of the stories is RESTORE, a short novella chronicling the events of a medical bot who is brought to the home of an Ascender to treat the Ascender’s legacy human artist-in-residence who is dying.

This futuristic world (post-Singularity) has genetic treatments for all sorts of cancers and infections, but these are prohibited to legacy humans–it is their genetic variability which is valuable, so they cannot change their genetics, even if it means dying young due to otherwise curable diseases.

Tyrus is a powerful Ascender and has brought Unit 7435 to his home to treat Sherrie, a 20 y/o artist whom Tyrus not only supports, he has great affection for her, a feeling which is reciprocated. Unit 7435 and Sherrie are told that Tyrus has acquired experimental medicine that will help Sherrie, and in one way this is true. Sherrie has battled through several rounds of chemotherapy for lymphoma, but is now suffering an opportunistic pneumonia infection.

As the day passes, Unit 7435 experiences, for the first time, emotional connection to a medical situation that is out of control. The tension is great and increases dramatically as the bot continues to check Sherrie’s vitals throughout the treatment. Tyrus and Sherrie express their great affection, while Unit 7435 observes and relates the tale, and the anxiety. The end is stark, but truly awesome. Don’t expect miracles of the human kind.

I was fascinated by the resonance within the bot’s POV. Having spent too many days at the bedside of a terribly ill loved one, this short read captured those experiences with a chilling accuracy that was anything but detached. Bravo!

The second novella, CONTAINMENT is another bot tale. This time, a low sentience Mining Master bot on Thebe, one of Jupiter’s moons, evolves enough to not only demonstrate creativity, but to engineer its own ascendance. I just seriously loved how logical, and yet captivated by beauty this bot was. There is an urgency to the story–Ascenders have put protocols into place that prevent the acquisition of such knowledge, but a la Jurassic Park: life finds a way.

The Master of Thebe recognizes all the fail safes, and works within it’s framework to defeat its own processing. It can and does go several directions that are dangerous, and likely to make it be destroyed, if noticed. I truly enjoyed the end, where we are able to see the human side of Ascendance, and how this is not altogether lost in the electronic mind post-Singularity. Again, being in the brain of a bot takes a bit of adjustment, but I think the goals of this character are human in desire, and fully approachable. #Loved

DEFIANCE third is a short story told from the POV of Cyrus, best friend of Eli MC of THE LEGACY HUMAN and the Singularity books. Cyrus is all alone in New Portland, an orphan of the Legacy sity, who has recently lost his grandfather caretaker. He’s about 17, and street savvy, working for a black market augment and meds dealer, Riley. There are lots of chemical ways Cyrus, and even Eli, could while away their time, but they stay sharp and sober. This is good, because it enables them to make use of their talents when Eli’s mom is diagnosed with lymphoma.

This story is actually a prequel to THE LEGACY HUMAN, so readers know that not only is Eli breaking the law to obtain gen-tech treatment for this mother, it is Cyrus who is supplying the illegal medicine. I really got a sense of Cyrus’ anger and frustration for a system where he feels humans are little more than zoo attractions for the Ascenders. Despite all their advances, their rigid rules and withholding of life-saving treatments are considered by all Legacies (and the off-the grid Legacy defectors) to be cruel and unjust. I loved getting to know Cyrus better, and to better understand all that he went through to help Eli and his mom. At any point Cyrus could have walked away, left New Portland and it’s rules and regime behind, yet he didn’t. He had people to care for, and a dangerous path to take in order to do so. A real subversive hero.

AUGMENT is a novella set deeper into the timeline of the Singularity novels. Miriam Levine is a jiv, a human that has mechanical prosthetics, or augments. Though she was born a Legacy human without legs, the Ascenders never installed the leg augments. No, those only came when Miriam’s father defected after his young wife was left to die of a heart condition. Miriam is 16 and an experienced fighter in the underground augment battle arena. By winning championships she’s earned several other internal augments, called mods. This story opens with Miriam battling a friend and fellow jiv to win the Resurrection mod, a newly developed internal device that would slow her heart and body systems to allow time for natural healing in the event of a catastrophic injury.

See, Miriam has a plan for humanity, and it’s NOT to be Ascender entertainment. No, the colonies of defectors have been looking for a Chosen, one of their own who will be both human and Ascended, and Miriam believes that, with the help of this Resurrection mod, she could be the first survivor of the neural implant procedure that’s part of being Chosen. Even if she dies, she reasons, the status accorded to her as a volunteer in the Chosen pathway will allow permanent care for her still-grieving and mostly despondent father. It’s a big choice for a young girl, and she is an excellent new character into this world. I have a feeling that Miriam and Eli are going to have many confrontations in the next Singularity book.

This is a great read for people who are captivated by dystopian fiction, and the AI augmented future of humanity. As the author points out in her notes, we already have a LOT of AI on Earth, and human augments thrive among us. It’s not a matter of IF this could happen, but WHEN…. 😉

Interested? You can find STORIES OF SINGULARITY on Goodreads and Amazon.

Author Susan Kay Quinn
Susan Kaye Quinn is the author of the Singularity Series, the bestselling Mindjack Trilogy, and the Debt Collector serial, as well as other speculative fiction novels and short stories. Her work has appeared in the Synchronic anthology, the Telepath Chronicles, the AI Chronicles, and has been optioned for Virtual Reality by Immersive Entertainment. Former rocket scientist, now she invents mind powers, dabbles in steampunk, and dreams of the Singularity. Mostly she sits around in her PJs in awe that she gets to write full time.