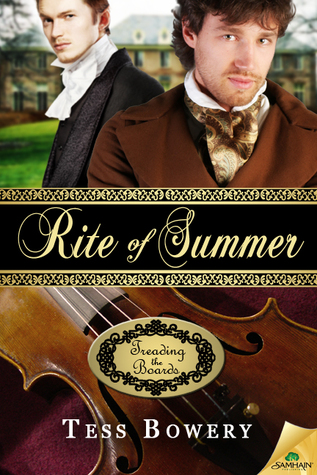 About the book:
There are terrors worse than stage fright. Like falling in love.

Violinist Stephen Ashbrook is passionate about three things—his music, the excitement of life in London, and his lover, Evander Cade. It’s too bad that Evander only loves himself. A house party at their patron’s beautiful country estate seems like a chance for Stephen to remember who he is, when he’s not trying to live up to someone else’s harsh expectations.

Joshua Beaufort, a painter whose works are very much in demand among the right sort of people, has no expectations about this party at all. Until, that is, he finds out who else is on the guest list. Joshua swore off love long ago, but has been infatuated with Stephen since seeing his brilliant performance at Vauxhall. Now he has the chance to meet the object of his lust face to face—and more.

But changing an open relationship to a triad is a lot more complicated than it seems, and while Evander’s trying to climb the social ladder, Stephen’s trying to climb Joshua. When the dust settles, only two will remain standing…when they’re not flat on their backs.

My Review:
Evander and Stephen have been together for nearly a decade, living the gay life in London. Evander is a composer and Stephen a violinist. Evander has a patron, the Earl of Coventry who invites Evander and Stephen for a six week holiday at his country estate. Stephen doesn’t want to go, he hates being confined in places where he can’t be himself, and being openly gay is not possible on the earl’s estate. Plus, he has to suffer the constant company of ‘his betters’ which is aggravating. But, if Evander demands he go, Stephen goes. Plus, Stephen knows their livelihood is dependent on Coventry’s whim and funding so he goes… The only upside is beautiful Joshua, a talented painter who is the distant relation, and personal painter, of one of the noble guests.

Joshua has been without a lover since his beloved sailor sank with his ship two years before. He is terribly attracted to Stephen, and cannot understand why Stephen lets Evander lead him around so much. He is startled to observe Evander and Stephen en flagrante delicto in the dead of night, and is even more surprised when Evander invites him to share their bed. Once.

But once is not enough for Stephen who had secretly desired Joshua, or Joshua. They continue until the party is overtaken by news of catamite (homosexuals) arrests in London. Stephen and Evander are shattered–some of the men taken into custody and hung were friends and former bedmates. Joshua wants to comfort Stephen, but his ability to do so is hampered by the suspicions of their hosts and patrons.

The book is a careful study in the emotional lives of both Joshua and Stephen, who share the POV. Stephen is routinely belittled and abused by Evander, and he knows no other life. Joshua calls to Stephen, supports him in a way Evander never has (or hasn’t in years) and Stephen wants to be with Joshua, but cannot due to Evander’s control.

I was really glad to see the unraveling in this dysfunctional relationship. Stephen really grew in terms of his emotional well-being. Joshua, did not grow so much as curl inside himself. He has lost in love before, and is rather brutal with Stephen in order to prevent being hurt again. He wants Stephen terribly, but won’t accept him if Evander is a part of the deal–forcing Stephen to re-evaluate his relationship, and make choices that are healthy instead of comfortable.

The end was a little too drawn out for me. I liked the story, but wanted it to progress a little bit faster. The characters were all well-drawn and felt very realistic in their goals and behaviors. I really enjoyed the depictions of actual historical events–namely the famous London raids–and how it affected the characters. Expect an HEA and some super sexytimes involving both M/M and M/M/M.

Interested? You can find RITE OF SUMMER on Goodreads, Samhain Publishing, Amazon, and Barnes & Noble. I received a review copy of this book via NetGalley.

About the Author:
Tess has been a fan of historical fiction since learning the Greek and Roman myths at her mother’s knee. Now let loose on a computer, she’s spinning her own tales of romance and passion in a slightly more modern setting. Tess lives on the east coast, with her partner of fifteen years and two cats who should have been named ‘Writer’s Block’ and ‘Get Off the Keyboard, Dammit.’