Hi there! Today I’m sharing a review for a contemporary YA novel from Deanna Cabinian that’s lots of coming-of-age and some of romance. ONE NIGHT follows Thompson Lake, a boy not a lake, as he recovers from loving, and losing, his cheating girlfriend.

Catch my review and enter to win a print copy of ONE NIGHT below. 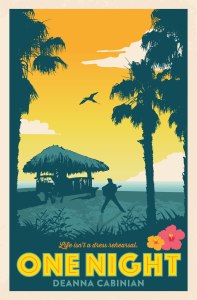 About the book:
Thompson may be only seventeen but he knows he’s just checked into Heartbreak Hotel for good, now that his girlfriend, Caroline, has put an end to their burning love. Since then he’s been sleepwalking through his summer job at Super Kmart while desperately dreaming of ways to win her back. He even drops by the Tiki House on Elvis Presley Night hoping that she, a diehard fan of the “King of Rock ‘n’ Roll,” will be there as well. That’s when he meets Johnny Lee Young—real estate agent by day, Hawaii’s Favorite Elvis Impersonator by night—and the lovesick teen’s world suddenly takes a wild and unexpected turn.

As luck would have it, Johnny needs a temporary assistant to help with equipment and social media and Thompson eagerly accepts the offer, hoping it will distract him from his painful and lingering romantic issues. But like Thompson, Johnny is nursing a secret heartbreak and pining for his own lost love. So the new roadie starts making plans—with a little help from his friends Ronnie and Greta—to accompany the counterfeit King on an odyssey of a lifetime that will take them far from their island paradise home in search of true love.

My Review:
Thompson Lake is a 17 year-old boy growing up in Honolulu. He had one girlfriend, Caroline, who said she loved him, made him feel special, and then cheated on him with two boys on what has become known as The Worst Valentine’s Day in History(TM). Since then, he’s pined and moped and reconnected with his best friend, a Hawaiian-Thai gangsta rapper called Ronnie. And worked at the Super Kmart.

Thompson hears that it’s Elvis-night at a local restaurant and goes, shamelessly hoping he’ll run into Caroline, as she’s a rabid Elvis fan. It was through Caroline that Thompson developed an affinity for his music, and seeing the entertainers, he’s struck by the sincerity of “Hurt” sung by Johnny Lee Young. Thompson wants to understand the pain and yearning he sensed in Johnny’s rendition, and follows him to a few venues, hoping to learn more. He does, as Johnny does tell him his slightly-fabricated tale of woe. When Johnny’s sound and social media assistant takes off for Italy, he gives the job to Thompson, who does it admirably, and they continue to build a friendship. Thompson thinks if he can fix that heartache for Johnny, he might just find a way to either win Caroline back, or forget about her betrayal for good. So, he enlists tech-savvy Greta, a pretty fellow cashier to help him find Johnny’s girl.

I really liked Thompson. He’s a good guy, and crazy intense. He’s sweet and determined and kinda sad with his desperate love for a foolish girl. Beyond that, he wants to leave a mark on the world, but suffers Overprotective Parent Disorder and has little opportunity to Do Something with himself. His first plan to help Johnny goes a bit sideways, mostly because Johnny wasn’t completely honest about the girl he let get away, way back when. Of course, the next quest is a lot more glamorous–because it takes them to humid Chicago in search of a bride-to-be who may, or may not, still love Johnny.

The friendship that develops between Johnny and Thompson is sweet. Both Johnny and Thompson have sibling issues–for completely different reasons–and they serve as surrogate brothers for each other, despite the 15 year age gap. Thompson really idolizes Johnny, and Johnny provides a good example, offering real and sincere advice to Thompson on how to get over a broken heart. I had lots of chuckles regarding Thompson’s dietary rebellions–snacking on contraband snacks to thwart his mother’s homemade, organic granola and kale chips. As a native Chicagoan, I relished the gourmand’s eye view Thompson and Johnny adopted in Chi-Town. Deep-dish pizza, bacon donuts and breakfast buffets? Yup, we got ’em. It’s clear that spending time with Johnny helped Thompson to grow up, and get over his heartache. It’s true that there’s no love like the first love, but Thompson recognized it doesn’t mean it’s the last, or only, love he could hope to find.

Interested? You can find ONE NIGHT on Goodreads and Amazon.

Click on this Rafflecopter giveaway link for your chance to win a print copy of ONE NIGHT.
Good luck and keep reading my friends.

About the Author:
Deanna Cabinian has worked in radio, television, and magazine publishing, but her greatest passion is writing. A graduate of Northern Illinois University, she has a bachelor’s degree in journalism and a Master’s degree in sport management. She writes from wherever she happens to be, but the majority of her writing is done from Chicago.

When she isn’t writing she enjoys traveling and spending time with her husband and family.

You can find Deanna onlin on her