Hi there! Today I’m sharing a contemporary holiday M/M romance collection featuring three excellent novellas. Each story is well-developed with delicious characters and no cliffhangers. It’s a fantastic read with lots of love, laughs and heat. 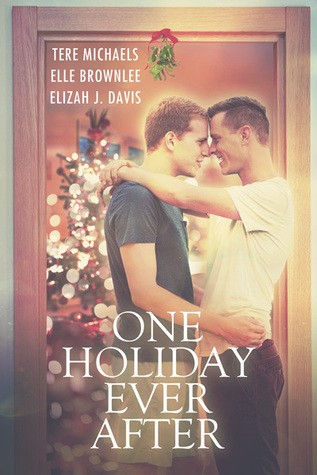 Holiday Roommates by Tere Michaels features a blossoming romance between a snarky actor and an overwhelmed, over-extended production manager.

Nathaniel has reached rock bottom. Despite his long career in acting, and his BFA in Theater from Yale, he’s out of work. Well, he’s got a job but it sucks. He’s an elf in a live do-wap Christmas production marking the grand opening of the La Kiss department store in NYC. He’s one month from eviction on his apartment and in his own words:

Sean owes his dad a lot of money. He didn’t want to go into the soul-sucking venture capital firm his father owns, so he borrowed cash to start a theater production company. Having few contacts and fewer bookings, he’s grasping for anything–and that includes begging his former boyfriend for a favor–which is how he got the gig producing La Kiss’ Holiday Spectacular. Of course, if it flops, he’s never going to have the cash to pay back Daddy Dearest, and as it stands his margin is so thin he’s rented a room to sleep in from a family in Bensonhurst. The commute to Manhattan is sapping his fleeting resources and hours of sleep.

Then, the star of the show–Nate–offers him a bedroom in his apartment…

The rent money would be almost the same as the cost of cabs and food eaten on the go–not to mention the fact that this would add literal hours to the time Sean could spend sleeping. It was all so reasonable and helpful and…
“I’m gay,” Sean said suddenly, interrupting Nate’s description of the room he’d potentially be renting.
Nate stopped, nodded. “Right, I knew that.”
“And that isn’t a problem?”
“Why, are you concerned you’re doing it wrong?”
Sean sputtered out a laugh. “I’m actually very good at it.”
Nate rolled his eyes. “Funny enough, so am I. Is that a yes?”

It’s a super fun read where these boys find love, acceptance and “family” where they least expect it.

Holiday Sanctuary by Elle Brownlee has two mature men trapped in a Maine cabin in the midst of a Christmas blizzard.

Paul has a doctorate in ornithology and his research has saved birds species from endangerment. He’s a solitary man, loving the solitude of his remote cabin, but he’s not averse to helping a stranger in need. Especially a strapping bear of a man who turns up as the snow tumbles down. Chris is out on a nature-challenge when the blizzard begins. Seeking shelter, he’d never anticipated finding more than a warm hearth, but bunking in with Paul is soon hotter than he could have imagined.

The bond that develops between them is far stronger than they anticipate, and each man finds the black out conditions allows for a welcome intimacy, one they are loathe to abandon, even when the plows arrive. It’s a steamer, with copious feels and smoking smexytimes.

Holiday Homecoming by Elizah J Davis is an unexpected romance between a man and the house-sitter he finds irresistible.

After a decade of campaigning, shmoozing and networking, Gavin has given up his dream of having his TV show produced. He leaves LA, for good, and drives to his parents home in remote Bonabri, Idaho hoping to catch them before they depart to his sister’s home for Christmas. Unfortunately, they left early and Eric is the person who freaks out at Gavin’s 2am arrival.

“Looks like they are still home,” Gavin said when the house creaked overhead. He scratched under Whiskey’s chin and waited, expecting the light to come on with each creak of the stairs. When it didn’t, he crept into the living room, toward the staircase, intending to switch on the light and startled his dad, who’d likely been the one sent to investigate. He secured Whiskey in one arm and darted at the light switch, flipping it on and turning to the stairs to shout, “Aha!”

“Aahhh!” The guy on the stairs yelled and then slid down several steps until he landed on his ass with a thump.

“Shit!” Gavin jumped back, because the guy on the stairs was not his dad.

Eric isn’t sure if he’s going to stay in Idaho–his BFF from college, Katie–has pestered him to visit, since, well, forever. She want’s to open a cafe, with Eric’s help, but the advent of Gavin has him reconsidering his usefulness as a house sitter now that the homeowner’s son is home. Yet, the men hit it off, and their friendship advances to one with benefits. And then some…

“Gavin?”
“Yeah?”
“Are you asking me to be your boyfriend?” Eric’s eyes were twinkling, dammit, and Gavin realized he was trying not to laugh.
“Did I not actually say that part out loud?”
Eric shook his head.

It’s a super fun read with a heartwarming plot.

Interested? You can find ONE HOLIDAY EVER AFTER on Goodreads, Amazon, Barnes & Noble and Dreamspinner Press.

You can clickety-click the author names above for further info on their books and online links.