Hi there! Today I’m sharing a review for a contemporary M/M coming-out and coming-of-age story from Robin Reardon. ON CHOCORUA is the first book in her Trailblazers series, which features a college freshman doing things…that cause him great pain. 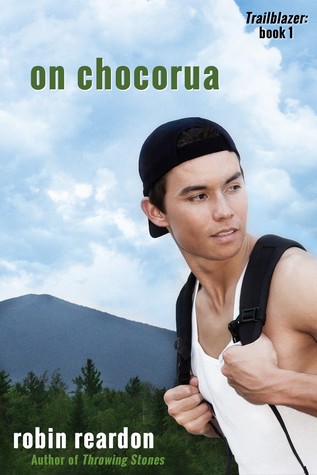 About the book:
A mountain. A blizzard. A young man new to hiking and to love, making mistakes in both.
First year of college. A great time to re-invent yourself. Nathan Bartlett takes the opportunity very seriously—maybe a little too seriously. And he makes mistakes.

His mistakes? Falling for a straight guy who reminds him of his beloved older brother. Getting too invested in the substance abuse disorders of two other students. And climbing a mountain in a snowstorm for all the wrong reasons.

But he also develops friendships that will be his for life. He faces his inner demons and comes up with a plan. And he realizes that answers to important questions are seldom waiting on the surface but must be worked for, or struggled for, or suffered for—and sometimes all three.

Nathan is a trailblazer on his own journey. His success will be measured not by how well he follows someone else’s path, but by whether he can forge his own. This first book in a series of three novels gets Nathan started on a journey that will teach him about himself, about life, and about love.

My Review:
Nathan Bartlett was orphaned at the age of one, and raised by his maternal grandmother with his sister Nina (a year older) and his eldest brother Neil who is six years older. Nathan has always looked up to Neil as more of a father-figure than a brother, and loves him dearly. Neil’s favorite activity of all time is hiking, and there’s plenty of it to do in their native New Hampshire. Nathan never hiked with his brother as the opening of the story is Nathan preparing to climb Chocorua peak alone, in memory of Neil. So, we start at the resolution, and then Nathan leads us backwards on his tale of woe.

Nathan has known he’s gay for years, but he never acted on it, and never dated anyone in his small community high school. He has told Neil his secret, and prepares to find a way toward meeting a man while away at college. As a freshman, it’s a big, bold new world, and Nathan comes out to his roommate to begin the year. El Speed is cool with it, and even attempts to negotiate a connection for Nathan with a gay student he knows. It doesn’t pan out, but Nathan hits it off with a boy in his acting class, Alden, and develops an unrequited crush on Daniel, the manager in the cafeteria dishroom where Nathan takes a job.

The story is essentially all about Nathan finding his people, and making headway into adulthood. It comes across as genuine, if not inspired. Alder becomes very important, as a guide for Nathan into physical sex and emotional love, but the relationship struggles when Alder’s personal demons come to call. Daniel serves as a mixture of the carnal male affection Nathan desires, inexplicably mixed with the paternal love Nathan’s always craved and sought from Neil. Daniel is a couple of years older than Nathan–so he’s got some experience and maturity–and he’s an avid hiker. Nathan thinks learning to hike with Daniel will enable him to be even closer to Neil–demonstrating his “un-tutored” prowess in something at which Neil excels. Unfortunately, Daniel’s a terrible guide and he’s not interested in being anything more than a friend. Daniel’s inexperience and arrogance nearly kills both himself and Nathan the first time they go hiking.

Over the course of the first year, Nathan learns how to stand up for himself, to come out to those whose support he needs, and to support those people who are being wronged/harmed by the callousness of others. He wishes he didn’t have to learn these lessons in so difficult a manner–especially in losing Neil. Nathan deals with his natural anxieties far better than most, and he’s rather well-adjusted considering his many tragedies in life. His friendship with El Speed, and his relationship with Nina both grow and help him keep a steady course. It’s a pretty quiet book, and I think knowing about Neil upfront took a lot of tension away for me. I was patiently waiting for the time Nathan would get the notice, and I didn’t feel as much connection to the situation as it unfolded because I then knew ‘Oh, this is where he bites it.’ And it was sad, no doubt, but the gut punch of grief didn’t manifest for me, since I was inured by the knowledge it was coming. That said, there are more books coming in this series, and I’m eager to watch Nathan’s world grow and (hopefully) get happier.

Interested? You can find ON CHOCORUA on Goodreads, Amazon, Barnes & Noble, iBooks. I received a review copy via NetGalley.

About the Author:
Robin Reardon: “I am an inveterate observer of human nature, and my primary writing goal is to create stories about all kinds of people, some of whom happen to be gay or transgender—people whose destinies are not determined solely by their sexual orientation or identity. My secondary writing goal is to introduce readers to concepts or information they might not know very much about. On my website, robinreardon.com, see individual book pages for “Digging Deeper” sections that link to background information and research done for the novel.

My motto is this: The only thing wrong with being gay is how some people treat you when they find out.

Interests outside of writing include singing, nature photography, and the study of comparative religions. I write in a butter yellow study with a view of the Boston, Massachusetts skyline.”