Hi there! Today I’m helping to get the word out on Nikko Lee’s upcoming release, WOLF CREEK. This is a contemporary M/M shifter romance that hits the digital shelves 9/9/15, so tomorrow…

Check out the excerpt and book giveaway below. 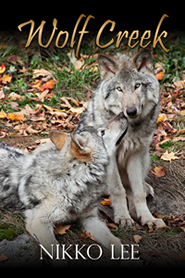 About the book:
Being the Silverbane pack’s omega is killing Josh. His plans to escape are foiled when he is blackmailed into finding a new alpha capable of controlling the largest pack in New England before the Amazons cull it. Josh has no clue how he is going to accomplish this task, let alone stay out of the sights of his power-hungry cousin, Bryce, who is convinced he is the pack’s next alpha.

Josh befriends Andrea, an erratic Amazon trainee, who talks to the ghost of her dead mother and has her own agenda when it comes to the wolf pack. When he is rescued by Gavin, a handsome park ranger driven to live in the furthest reaches of civilization, Josh feels a pull toward him that is more than just physical attraction. The three develop a bond that is stronger than friendship and tested at every turn.

With the help of his new family, Josh must find the strength within him to save the Silverbane pack and defeat the evil that threatens to turn them into killers. Only then can he finally be free.

Click the Rafflecopter link below for your chance to win a copy of WOLF CREEK.
a Rafflecopter giveaway
Good luck and keep reading my friends!

About the Author:
Nikko Lee is a scientific curator who enjoys writing genre fiction from erotica to horror under the pen name Nikko Lee. Born in Canada, she moved to Maine after completing a PhD in Zoology and her post-doctoral training. She resides near Bar Harbor with her husband, daughter, two cats and malamute. The author blogs about hiking, writing and science at http://www.nikkolee.com.