Sophie has seven days to live. Unfortunately she spends most of them in Hell…

Hi there! I jumped at the chance for a sneak peek at the final installment of Tellulah Darling’s Blooming Goddess trilogy–MY LIFE FROM HELL. This imaginative, innocent, urban fantasy is a solid end to one of the funniest YA series’ I have read. 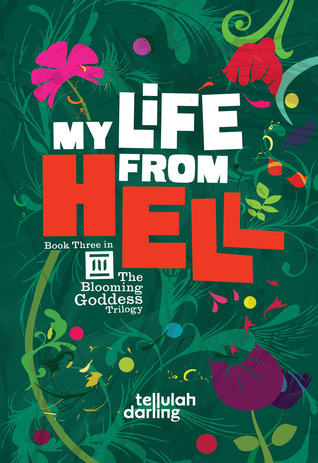 Sophie Bloom is a survivor. She has to be, she’s the reincarnation of Persephone, the Greek goddess of spring. She and her boyfriend Kyrillos—Hades’ son—had a big plan to defeat both Zeus and Hades and claim Olympus for themselves—oh and for Demeter, Persephone’s mother. But Persephone truly planned to double-cross them all and claim Olympus for herself. That’s why Demeter stabbed her.

The titan Prometheus has sacrificed his powers to transfer Persephone’s memories and goddess essence into a child, Sophie Bloom, who is celebrating her seventeenth birthday. She knows all about Persephone’s schemes and is struggling to connect to Kai—Kyrillos—being her boyfriend. Even more so since he knows Persephone planned to kill him all those years ago. But, in order to stop the destruction of humanity by Zeus and Hades, Sophie and Kai need to perform a ritual on the first day of spring that requires their complete love for each other in order to work.

Too bad the Equinox is seven days away.

Sophie has trained hard to master her goddess powers, but she can’t escape the disturbing visions she’s having of a world filled with destruction—and herself being the center of the maelstrom. Then she goes and mouths off to Demeter again. Same old, same old—even if it’s Sophie, not Persephone, butting heads. Demeter has her BFF Hecate, goddess of witchcraft, curse Sophie right back into Hades.

Yeah. But this time it’s Sophie trapped in Persephone’s form in the days just prior to her inglorious demise.

Now Sophie must get Kyrillos to see through the magic to fall in love with herself, not Persephone. Oh, and to win over Prometheus as an ally. Oh, and to convince Hephaestus to help them all escape Hades before Demeter gets stabby.

It’s a tough challenge, but meet it Sophie will—or else humanity is doomed. If only Sophie could find the strength within herself to accept her fate, and love herself. Because, really, what greater power than love could a goddess have?

Like the first two books in the series, this one rockets forward into the action. There are many characters that play an important role, but Sophie is the heroine front-and-center. She saves herself, Persephone, humanity and her BFF’s in the process. Her sharp wit keeps the tone engaging.

At times, I wanted to pull a Cher in “Moonstruck”


just to get her to see that LOVE was the answer she couldn’t seem to find. In all, the series is fun, innocent and creative. If nothing else, reading these books will get you ready for Greek Mythology category on JEOPARDY…but that’s only one small reason to read them.

I received an advanced reviewer’s copy of this book via NetGalley.

Because this is the third book–make sure to check out the first two in the series:

MY EX FROM HELL and MY DATE FROM HELL. There’s even a cute little 2.5 novelette about Theo and Festos’ second date that’s an entertaining read and FREE on Kobo.

Interested? You can find MY LIFE FROM HELL on Goodreads, and Amazon.

Tellulah Darling is a firm believer that some of the best stories happen when love meets comedy. Which is why she has so much fun writing young adult romantic comedy novels. Her tales span contemporary, teen fantasy romance, and YA Greek mythology, and range from stand alone books to series. For Tellulah, teen romance is the most passionate, intense, and awkward there is – a comedy goldmine. Plus smart, mouthy, teen girls rock.