This month, my favorite read was REVENGE OF THE EVIL LIBRARIAN by Michelle Knudsen. This contemporary YA romance has a whole lotta paranormal, and picks up half a year after EVIL LIBRARIAN left off. I think it’s best of you read these books in order. 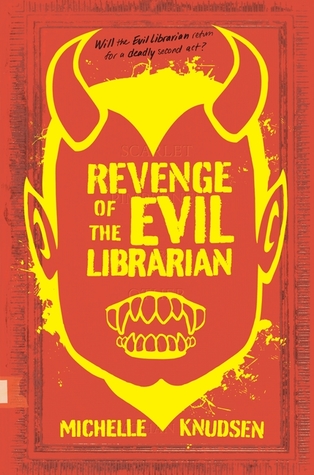 About the book:
The stage is set for a fiendishly dramatic summer at theater camp for Cynthia and her boyfriend, Ryan. With no demons at all. Right?

Last fall, Cynthia Rothschild saved her best friend, as well as the entire student body, from the demon librarian, Mr. Gabriel, all while executing the most awesome set design for the school musical, Sweeney Todd. But now that all that demon stuff is behind her, Cyn is looking forward to the best summer ever at theater camp with her former-crush-and-now-boyfriend, Ryan Halsey. Once she gets to camp, though, Cyn realizes this summer might not be all she’s been hoping for. First, Ryan’s best camp friend is a girl (which Ryan had never mentioned to Cyn), and she just happens to be ridiculously pretty. Plus, it seems the demon stuff is not entirely over as Cyn had hoped. At least any new demons that show up to ruin her summer can’t possibly be as evil as Mr. Gabriel. It’s not like he could somehow come back to life to seek his terrible revenge or something. Best-selling author Michelle Knudsen brings back all the hilarity and horror (not to mention hot guys) in this sizzling sequel to Evil Librarian.

My Review:
Cynthia Rothschild is off to have a fantastic summer of theatre camp, designing sets that will (hopefully) earn her a “Tony”. Her sweet, sexy and swoony boyfriend, Ryan, has been attending this camp for years. Years! And he’s sure Cyn will love it. Except, well, he neglects to mention his camp bestie, Jules, is a beautiful, talented female lead. And, Jules isn’t best pleased to meet Cyn–especially as she and Ryan have been texting/emailning over the past seven months and Ryan didn’t think to mention Cyn, or having a girlfriend, at all.

Yeah, so, teen romance drama is on the program, naturally, but this all becomes complicated when Cyn spots a demon in residence, in fact, he’s Peter, camper-writer of the musical Cyn’s been slated to stage. Peter admits to being a demon–but a good one!–who’d never kill anyone and gains his energy from the everyday drama of human relationships. He’s getting a feast off the Cyn-Ryan-Jules thing. Also, Cyn’s demon-repelling powers are in high demand with the demoness who assisted Cyn by destroying Mr. Gabriel, the evil librarian of the first book. As much as Cyn wants to deny the possibility, the book is titled “Revenge of the Evil Librarian.” Expect Mr. Gabriel to come back. What he lacks in style and substance, he makes up for in sheer malevolence. Even Annie’s at risk again, until Cyn can come clean about all her secrets and get her friends on board for a demon-take-down.

Ryan and Cyn struggle with trust issues, Peter’s eager to step-in as Cyn’s leading man, and demons, demons, lots of scary demons. The tension isn’t quite so high as the first book in this series, but there’s a lot more of the demon world, and the stage has already been set for murder and mayhem. Ahem. I really liked how Cyn owned her foibles and gave her focus to the most important issues: saving the humans, first. The rest of the emotional problems–hurting Ryan, losing friends, keeping her sights off the sexy flirting demon playwright–had an appropriately lowered focus, so it didn’t seem cartoonish. The pace is tense, the battles are gruesome and the enemies are many and horrific. I couldn’t stop turning the pages by the end.

Interested? You can find REVENGE OF THE EVIL LIBRARIAN on Goodreads, Amazon, Barnes & Noble and your local library. I read a review copy provided by NetGalley.

About Author Michelle Knudsen:
I’m the author of 45 books for young readers for all ages. Titles include the New York Times best-selling picture book Library Lion (illustrated by Kevin Hawkes), the middle-grade fantasy novels The Dragon of Trelian and The Princess of Trelian, and the YA novel Evil Librarian, which won the 2015 Sid Fleischman Award for Humor(!).

Thanks for popping in my friends. Be sure to check out my fellow Coffeehouse reviewers to see if their “best book” picks strike your fancy, too.

This month, my favorite read was EVIL LIBRARIAN by Michelle Knudsen. This contemporary YA romance had a real paranormal plot–but took me in a whole new direction.

When Cynthia Rothschild’s best friend, Annie, falls head over heels for the new high-school librarian, Cyn can totally see why. He’s really young and super cute and thinks Annie would make an excellent library monitor. But after meeting Mr. Gabriel, Cyn realizes something isn’t quite right. Maybe it’s the creepy look in the librarian’s eyes, or the weird feeling Cyn gets whenever she’s around him. Before long Cyn realizes that Mr. Gabriel is, in fact . . . a demon.

Now, in addition to saving the school musical from technical disaster and trying not to make a fool of herself with her own hopeless crush, Cyn has to save her best friend from the clutches of the evil librarian, who also seems to be slowly sucking the life force out of the entire student body! From best-selling author Michelle Knudsen, here is the perfect novel for teens who like their horror served up with a bit of romance, plenty of humor, and some pretty hot guys (of both the good and evil variety).

Cynthia Rothschild is in a real bind when her bestie, Annie, falls for the new high school librarian. Cyn knows from crushes; she’s practically worships the ground Ryan Halsey walks upon–not that he’d ever notice her. Ryan is all things beautiful and fantastic, but for Annie, she only has eyes for Mr. Gabriel.

Yes, Cyn thinks he’s attractive, but whenever she’s around him, Mr. Gabriel seems super-duper creepy. She’s got some sense that he’s a bad guy, deep inside, despite his flawless smile and pleasant demeanor. Watching all the people who come into contact with Mr. Gabriel, Cyn notices that they seem to roam the halls with vacant stares and lost memories.

Cyn’s desperate to snap Annie away from Mr. Gabriel, notwithstanding Annie’s outright obstruction. This goodie-two-shoes is now skipping classes and coming in early/staying late, all for the chance to spend more time with Mr. Gabriel–and soon Cyn notices that Annie’s touch has a similar disorienting affect on their classmates and teachers. Seeing Ryan notice his own buddies have zombie-like symptoms, Cyn relates her worst, and pretty out there fear: Mr. Gabriel isn’t human, and he’s stealing the souls of the school.

Ryan is sure Cyn’s ready for crazytown–until they witness Mr. Gabriel in all his demonic fearsome splendor. From there, it’s a battle of wills and personalities. Gabriel plans to take the souls of the entire school, powering his batteries for a battle royale in Hell, and making Annie his demon bride when he assumes the throne. Cyn, obviously, doesn’t want this to happen. Ryan’s pulled in to help, because only he and Cyn really can see the true danger of the situation. They have to call in unlikely allies, including the school’s meanest teacher and a demon-loving book curator, to help save everyone. The good thing? The school’s musical for the term is Sweeney Todd, and, as all demons love Sweeney, Gabriel’s evil plot won’t go off until opening night ends.

This is a really interesting high school romp, with a fun unrequited crush, more than one dead teacher, friends-behaving-badly and, well, demons. Yes, more than one filthy underworld soul-sucker makes a ghastly appearance in this “damned” high school. I can’t say I had many laugh-out-loud moments, but I was thoroughly amused from beginning to end. Even the grisly bits were imbued with a sense of deprecation or exaggeration that bordered on the absurd, in just the right way. I loved how wild the demons were for Sweeney, and how that gave Ryan and Cyn a reprieve because Ryan has the lead role, and Cyn’s the tech director charged with building the magnificent barber’s chair. (For those who have no idea what Sweeney Todd‘s about, well, that’s a review for another time. Short, short version: a musical about a murderous barber and the landlady who turns his victims into bestselling “meat” pies.)  Clearly, that’s prime entertainment for homicidal demons.

And EVIL LIBRARIAN is prime entertainment for anyone who likes a little romance in their YA paranormal books. The sequel comes out in a couple weeks, and I’m looking forward to reviewing it soon!

Interested? You can find EVIL LIBRARIAN on Goodreads, Amazon, Barnes & Noble and your local library.

I’m the author of 45 books for young readers for all ages. Titles include the New York Times best-selling picture book Library Lion (illustrated by Kevin Hawkes), the middle-grade fantasy novels The Dragon of Trelian and The Princess of Trelian, and the YA novel Evil Librarian, which won the 2015 Sid Fleischman Award for Humor(!).

Thanks for popping in my friends. Be sure to check out my fellow Coffeehouse reviewers to see if their “best book” picks strike your fancy, too.