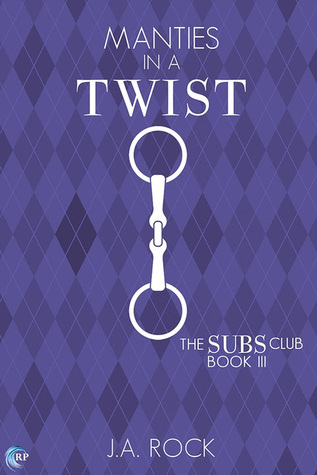 About the book:
Look, I’ll never stop missing Hal, but this Subs Club my friends started to review suck-ass doms isn’t gonna bring him back or give him justice. For me, it’s just another chance to hang out with my friends, even if they think I’m too dumb to understand the important work we’re supposedly doing.

But maybe I’m not as dumb as they think—at least I know when I’ve got a good thing going. Which is why I just moved in with my dom. Ryan’s awesome possum. He’s really short, never makes me feel stupid, and is up for anything. One word: costumes. Two more words: women’s underwear. We’re all about the lace, no leather.

Except when we do pony play. We first tried it as a joke, but turns out I’m ballin’ at it. Now PetPlayFest is coming up, and I wanna take down the Subs Club’s archrival, Cinnamon the ponygirl, in the horse show.

My friends think I’m spending too much time with Ryan and ignoring my obligations to the group. But since when is friendship an obligation? Ryan’s my first serious relationship, and I want to take it . . . seriously. At some point I need to think about my future, not my past.

My Review:
This is the third book in a series and I’ve not read the two previous, but that was fine. I slid right into Kamen’s head, which is an extremely busy, yet paradoxically simple, place.

Kamen is one of four childhood friends, and he’s still close to Dave, Miles and Gould–the other principals of the Subs Club. They started the club to raise awareness within their community about bad Doms and much of that was due to the death of their dear friend, and fellow sub Hal, who choked in a public rope-play scene. Dave and Gould are still traumatized by this, as is Miles and Kamen, but Miles and Kamen seem to be getting past the grief–which upsets Dave and Gould.

Kamen’s happy with his live-in Dom, Ryan, who is far smaller than Kamen, a burly athletic man. It’s part of Ryan’s attraction, actually, Kamen loves feeling like a dragon at the end of his diminutive Dom’s leash. I seriously dug their dynamic. Kamen is totally gaga for Ryan, and gets frustrated that his peers are not so enthusiastic. It was bittersweet for him, and I thought it poignantly reflected that break in life, where that first serious relationship intrudes and makes a person less-available for the “buds” than they have ever been before. That resentment was clear between Kamen’s bros and Ryan.

Within their apartment Kamen and Ryan indulge in play they have never considered previously. An errant pair of panties sparks a whole new level for them, with Kamen dabbling in not only manties but also drag. Then, a nasty altercation with ponygirl Cinnamon launches another new phase for them: pet play. (This type of play requires one of the partners to dress and act the part of an animal, while the other behaves as a trainer. It is not always sexual.) Cinnamon was present when Hal had died, and the Subs Club considers her to be Public Enemy #1, so joining the PetPlayFest competition with the intent to best Cinnamon at her own game is a vengeful step.

All of this seems odd and sordid, and I’ll be honest, it is and isn’t. It’s fun and free and flexible and still damn funny, because Kamen is a rock star and does absolutely nothing by halves. He’s never been into pet play but he dives in with and enthusiasm that is unquenchable. He and Ryan invest a ton of cash to purchase all the accoutrements, they build a cart (for the cart race, natch…) Kamen learns all about dressage and how to be the most graceful Thunder Canyon (that’s his stallion name, yo) that he can be.

Through all of this, Kamen has to come to terms with his mostly adult life, and it seems to work out. I had some Whoa! moments where Kamen’s awesome possum insight struck very close to the bone, and it made me love this book. The voice took me a bit of time to enjoy, because Kamen speaks like a twitter account, and I had to acclimate. After that, it was off to the races.

Interested? You can find MANTIES IN A TWIST on Goodreads, Riptide Publishing, Amazon, AllRomance, Barnes & Noble, Kobo , and iBooks. I received a review copy of this book from NetGalley.