Hi there! Today I’m sharing two reviews for North Pole City novellas of M/M elf-love by Charlie Cochet. I started this series years ago, and fell for MENDING NOEL, THE HEART OF FROST and VIXEN’S VALOR–each holiday season when these books were released. For some reason I forgot to grab LOVING BLITZ last year, so I picked it up with this year’s DISARMING DONNER.

There books are an interconnected series and best enjoyed when read in order. All titles in this series are currently 30% off at Dreamspinner Press through Dec 30th.

About LOVING BLITZ:
From North Pole City to Winter Wonderland, preparations are underway after a royal announcement sweeps everyone into a frenzy of festivity. At the heart of the celebration are the city’s most beloved elf pilots, the Rein Dears. Once the Big Flight is behind them, the pilots prepare for the royal event. Assigned a special task of finding an Elska rose, Cupid and Blitzen are unaware of how their friendship is about to change forever.

Yet not all that glitters is gold. The sweet, angelic Cupid hides a dark secret, one that threatens to destroy his Rein Dear status, his friends, and the elf who’s captured his heart. It’s up to Blitzen to help Cupid see the light in the darkness and show him that together they can mend broken hearts.

My Review:
Christmas Elves Cupid and Blitzen have been best friends since they went to school to train to be Rein Dears, the elite flight squadron that delivers global Christmas cheer now that Santa’s too busy with his Mayor Kringle status. They are tender and loving to each other, but just friends. Though, a quick kiss at the Jingle Bells Ball sets each man examining if they could possibly become…more.

Blitzen doesn’t want to hurt his friendship with Cupid, but Cupid has even darker reasons for not pursuing his best pal: he’s not exactly a Christmas Elf. His mother was a winter faery, but his father? Dockalfar–the dark elves that instigated the Frost Wars centuries ago. Dockalfar aren’t welcome in North Pole City, and would never be accepted as a Rein Dear. Or, so Cupid believes. When his elder brother turns up to wreak mischief and mayhem and ruin Cupid’s happy existence. That Cupid and Blitzen are just beginning to explore the love burgeoning between them is mighty inconvenient.

This novella is mostly sweet with a bit of sad. Cupid doesn’t want to harm his brother, but he can’t let the man destroy North Pole City. Nor can he face being shunned by Blitzen. I liked how his double-life, as it were, gets smoothed out, and we get the introduction of two potential couples for future stories: Dasher and the King of Frost, and Cupid’s other brother, Calder, with Donner. There’s a couple steamy moments, and a lot of love sprinkled within this sweet novella package. I find the series enchanting–and Christmas magical. 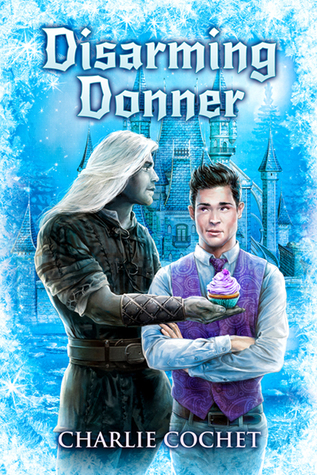 About DISARMING DONNER:
As a beloved Rein Dear and Christmas elf for Mayor Kringle, Donner prides himself on his flawless reputation, good sense, and wise decisions. Donner never does anything until he’s thought it through properly. He’s certainly not one to get flustered, infuriated, or fall prey to romantic nonsense. At least not until the most unlikely of elves begins chipping away at Donner’s defenses.

Calder is a Dockalfar—a dark elf. He’s wicked, untrustworthy, and armed with lethal magic. At least that’s what everyone thinks. It’s easy for them to believe the worst and mistrust him before they’ve even spoken to him, but Calder is out to prove that he’s more than his Dockalfar blood, especially to a certain Rein Dear who has caught his eye. But it will take more than sweet words for Donner to admit what’s in his heart.

My Review:
Calder is a Dockalfar, a dark elf, hated and feared by the light elves of North Pole City, including Prince Jack Frost. He’s only been granted access to the city so he can train his younger brother, the beloved Rein Dear Cupid, to control his magic–so he doesn’t harm anyone. Calder is a solitary elf, never looking to engage in a fight, but he’s formidable and a near-giant in stature. All Calder has ever longed for is a man to share his life with; but Dockalfar males don’t couple, and no Christmas elf, Tin Soldier, or winter faery would have him.

Still, Calder is attracted to Donner, the prickliest of all Rein Dears. His violet eyes seem to call for him, and Calder can’t help volunteering his services as a stand-in escort to Donner in the preparations for Jack Frost and Rudy’s wedding. Also, he’s eager to assist when there’s trouble in the town–building new gingerbread houses for elves displaced by avalanche.

Donner’s mystified by Calder. He should be evil and mischievous, but isn’t. He’s kind and generous, and uses his magic for good whenever he can. It’s upsetting for Donner to have all his notions regarding Dockalfar up-ended, even if Calder is the one good one of the lot. And, there’s no question that Calder is good. And attractive. And so very tall and strong and…oh, sugar plums! Donner’s falling hard for Calder, despite his best intentions. I liked this one, and really wanted it to be longer. Enemies-to-lovers are always a fun read, and this is no exception. I loved how Calder and Cupid’s brother semi-redeemed himself, and how we’ve got one final romance to look forward to in next year’s story: Dasher wooing the ice-cold heart of the King of Frost back to life!

About the Author:
Charlie Cochet is an author by day and artist by night. Always quick to succumb to the whispers of her wayward muse, no star is out of reach when following her passion. From adventurous agents and sexy shifters, to society gentlemen and hardboiled detectives, there’s bound to be plenty of mischief for her heroes to find themselves in, and plenty of romance, too!