Today marks the eRelease of THREE OF HEARTS by Kelly Jamieson. It’s an adult, ménage standalone romance that features three rising country music stars who find themselves in love—with each other. In addition to being a steaming M/F/M and F/M/M story, part of the proceeds from sales of this book will benefit the IT GETS BETTER Project. 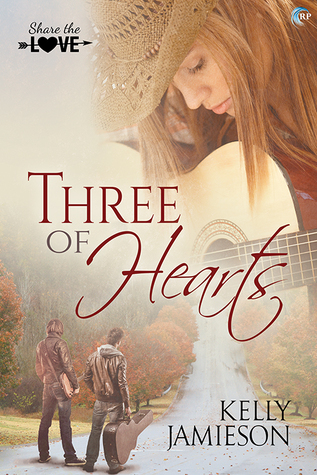 Haylee Tremayne is tired of the road. The concert tour for Three of Hearts was a success, but she’s confused by the inexplicable tension between her bandmates, Ben and Lucas. She’s also ready to go home to her boyfriend in Nashville. Time off would probably help everyone relax, even if it is Christmas, a season with too many bad memories.

Back in Nashville, Ben and Lucas prove again and again that their first night wasn’t a mistake. But the tension between them is still high, and on Christmas Eve, their ménage takes a stunning turn. When it all falls apart, Haylee is terrified that their crazy relationship might cost them the band, their success, and worst of all, each other.

My Review:
Haylee, Lucas and Ben are the members of the country-music trio, Three of Hearts. They are relatively new band, performing for the past two years. They all share Ben’s home in Nashville, due to the constant touring and a willingness to pool resources. It’s working; they have great chemistry and recently won a CMA for Rising Artists.

On the last stop of their successful 6-month tour Haylee is excited to return home to her boyfriend, a player on the Nashville Predators hockey team–until she finds he’s not so celibate in her absence. Pics of him and another singer fairly litter the Interwebs…

Lucas and Ben scrape Haylee out of her heartache, temporarily. And, she bucks up and sings the lights out–for the first time really connecting on stage with Lucas in a way she had never felt before. At the after party Haylee’s one sip from wasted, and Ben and Lucas practically carry her to her room. Haylee knows Ben and Lucas have had some spectacular multipartner sexcapades on the tour, and she’s feeling both bold, and lonely. Their care and concern soon morphs into sexual healing.

Morning after regrets? Yup. But those three hearts hit the well, again. And, again. It’s mindblowing for Haylee, and yet she’s shell-shocked to learn that Ben has real feelings for Lucas…and she feels used, as if Ben accessed Lucas, through her.

Lots of misunderstandings get all smoothed out with some serious conversation and a big TLI–total love in. Liked the way this turned out, but I kinda felt the M/M aspect was rushed and glossed over. Ben is bisexual, and Lucas is…not. He loves Hayley romantically and loves Ben platonically, though he’s open to *maybe* more. Then, suddenly, this GFY boy is going all the way. I would have appreciated a bit more exploration.

Nonetheless, the characters are fun, the smexytimes steam and it’s an interesting first connection story. It’s all told through Haylee’s POV and was DYING to get into Lucas and Ben’s brains…

Interested? You can find THREE OF HEARTS on Goodreads, Amazon, Barnes & Noble, and Riptide Publishing. Riptide is offering a SHARE THE LOVE SPECIAL BUNDLE price–three books for $12.99, so feel free to investigate that deal! I requested a copy of this from the publisher via NetGalley. This is my honest review.

Kelly Jamieson writes romances with heat that’s sweet. Her writing has been described as “emotionally complex”, “sweet and satisfying” and “blisteringly sexy”. If she can stop herself from reading or writing, she loves to cook. She has shelves of cookbooks that she reads at length. She also enjoys gardening in the summer, and in the winter she likes to read gardening magazines and seed catalogues (there might be a theme here…) She also loves shopping, especially for clothes and shoes. But her family takes precedence over everything else (yes, even writing). She has two teenage children who are the best kids in the world, not that she’s biased, and a wonderful husband who does loads of laundry while she plays on the computer writing stories. She loves hearing from readers, so please visit her website, Goodreads and twitter.