Soul Oath (Everlast #2)
by Juliana Haygert
Expected pub date: Nov/25/2013
Length: ~80,000 words
Cover: Okay Creations
Summary from Goodreads:
It’s been three months since Nadine last heard from Victor, Micah or Ceris, allowing her to concentrate on her own life. But until Victor and Micah find the scepters that will restore them as true gods, their human bodies will require her healing touch and it’s only a matter of time until they wreak havoc on her life again.
As if to prove that, Victor shows up at the hospital dragging along with him a swarm of demons. Nadine is forced to flee to safety. Despite her attempts to keep her loved ones protected, the demons find her, and they bring her to Imha, the goddess of Chaos.
Now, confronted by her greatest fear, Nadine finds a new motivation. Vengeance. And when seeking revenge, no risk is too great, including her own life.
**New Adult Fantasy Novel** 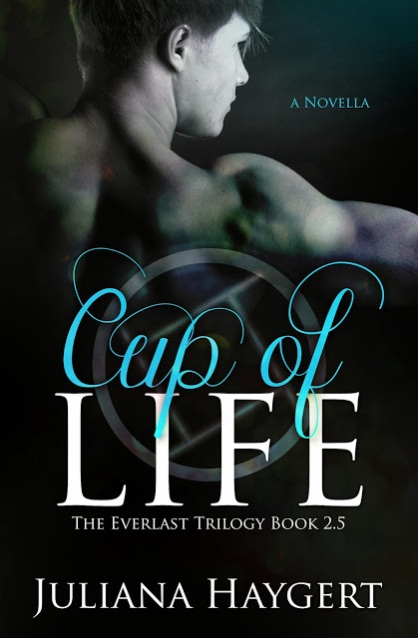 Cup of Life (Everlast, #2.5)
by Juliana Haygert
Expected pub date: Nov/25/2013
Lenght: ~15,000 words
Cover: Okay Creations
Summary from Goodreads:
His existence would mean nothing without her.

Book One:
(linked to Goodreads) 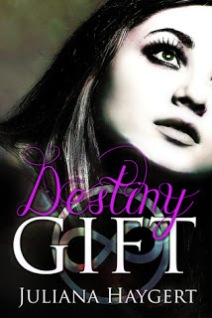 About the Author:
New Adult author and contributor at NA Alley blog.
While Juliana Haygert dreams of being Wonder Woman, Buffy, or a blood elf shadow priest, she settles for the less exciting—but equally gratifying—life of a wife, mother, and author. Thousands of miles away from her former home in Brazil, she now resides in Connecticut and spends her days writing about kick-ass heroines and the heroes who drive them crazy.
Author Links:

Horses, mansions, tea parties, and lies are twenty-year-old Hannah Taylor’s life. To others, her family and her relationship with Eric is perfect. But she knows the truth. She lives it.

After a fire takes her grandma’s life and kills her horse, Hannah’s immaculate life spirals out of control. Her father disapproves of her decision to run her grandma’s ranch instead of focusing solely on learning the family business; Animal Control brings her Argus, a mistreated horse that she can’t turn away even though she’s not ready for another horse; and her boyfriend, Eric Bennett, a world famous polo player, becomes possessive and authoritarian. Despite her best efforts to disguise it, Hannah grows wary of him.Then, Leonardo Fernandes struts onto the polo scene. A cocky rookie with a messy life of his own, he’s drawn to Hannah and isn’t afraid of showing it, even when Eric makes it clear she is his and he’ll do whatever it takes to keep it that way. Hannah suffers for Eric’s jealousy. The abuse only gets worse when Leo steals the title of best polo player in the world from Eric.But the title isn’t enough for Leo. He wants Hannah too, and she can’t deny her attraction to him either. Somehow, she must find a way to break free from abusive Eric before he breaks every bone in her body.
**New Adult Contemporary Romance Novel**

AND!
iTunes and Amazon UK

Praise for Breaking the Reins:
“Breaking The Reins by Juliana Haygert is a real treasure. It’s a sexy, heartbreaking and romantic ride you won’t want to miss.” —Sawyer Bennett, USA Today Bestselling author of Off Side, Off Limits, Off
the Record, and Off Course.
“A breath of fresh air in the New Adult market. Juliana Haygert’s new contemporary novel is one not to be missed!” —Magan Vernon, international bestselling author of The Only Exception
“A swoonworthy love interest and a fantastic backdrop make Breaking the Reins a New Adult read you don’t want to miss!” —Alyssa Rose Ivy, bestselling author of The Crescent Chronicles, Clayton Falls Series,and The Hazards of Skinny Dipping.
Excerpt:
After greeting Blaire and Andrea, who I wasn’t too close with, we ordered tea as the conversation continued. They talked about shoes and the latest Roberto Cavalli creations. I spoke a bit here and there, though I would have preferred talking about Country Outfitter instead. Suddenly, the subject changed to trips. Carmel, Aspen, Paris, Rome, and other fancy places.
And I was bored.
My gaze drifted from side to side, and I noticed Sandra had left, but I wasn’t really looking for anything.
Until I found him.
The first thought on my mind was, what the heck was he doing here? The second, damn, he looked good. The third, I shouldn’t be thinking that.
Dressed completely inappropriate for a polo club—in jeans, a blue T-shirt, and cowboy boots—Leo walked up the path to the right of the tennis courts, flanked by three guys and a girl. They talked animatedly, smiling and touching each other’s arms or shoulders occasionally. A few feet behind them, a couple holding hands followed. By their similarities, I would bet they were all related.
The girls kept talking and giggling about whatever, but their voices were a buzz in my ears as I strained to catch anything, any word, from Leo and the ones with them. They were too distant, and even the few words I heard were spoken in fast Portuguese.
A few steps from the main house, Leo looked at the courts, following the game closest to him for a couple of seconds, before his gaze continued on.
Until he found me.
His eyes wide, Leo stopped in his tracks, and the guy behind him bumped into him.
“Hey,” the guy said, taking off his baseball cap and sunglasses. He looked familiar, somehow.
“Why is that guy staring at our table?” Megan asked, giggling.
I averted my eyes and pretended I didn’t know what she was talking about.
“What guy?” Blaire asked, turning in her chair. “Oh, he’s cute. All four of them are.”
“Look at them,” Andrea said. I didn’t, but from her eyes, I noticed they were moving again. “They must be the team playing against the Knight House.”
I knew Eric was going to play against an international team, but in all his dealings with France, it never occurred to me the team could be from somewhere else.
Could it be? Eric playing against Leo? And why did I care? Leo was nobody.
“Oh yeah,” Megan said. “Ohmygosh, I’ve seen one of them here before. He was an exchange player, with a team from Florida.”
Really? So that was why one of them looked familiar. Or it could be because they all looked like each other, and I’d taken my time observing Leo the other day. The urge to peek in his direction was strong, but I avoided it at all costs.
“True,” Blaire said with a big smile. “What’s his name again? Oh, Ricardo Fernandes. He was swoon worthy. I bet he still is.”
The girls giggled, and I forced a smile so they didn’t notice how disturbed I was.
“Maybe we should go welcome them to the club,” Megan suggested, wiggling her eyebrows. Then she patted my hand. “Lucky you. Practically married to a gorgeous man while we have to chase potential dates around here.”
I was lucky, wasn’t I? Eric was handsome, educated, generous, kind, and a great polo player. He was a little too jealous for my taste, but I reminded myself that was because he loved me so much. What else could I need?

About the Author:
New Adult author and contributor at NA Alley blog.
While Juliana Haygert dreams of being Wonder Woman, Buffy, or a blood elf shadow priest, she settles for the less exciting—but equally gratifying—life of a wife, mother, and author. Thousands of miles away from her former home in Brazil, she now resides in Connecticut and spends her days writing about kick-ass heroines and the heroes who drive them crazy.