Hi there! Today I’m sharing my review for JUGGERNAUT, by Amelia Gormley. This is the “prequel” book to STRAIN, a post-apocalyptic dystopian future story about survivors of a virus that killed billions. In Juggernaut we see the world before and immediately after the viral outbreak. If you have read STRAIN (published a year ago), there are no spoilers below. If you haven’t, well, I don’t think I give away more than the blurb will tell you…. 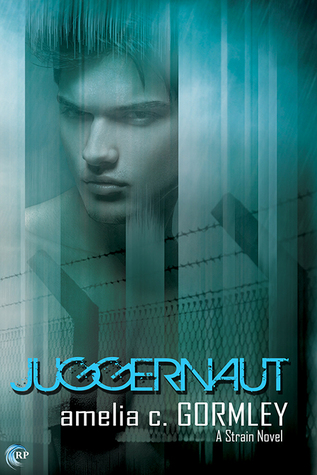 About the book:
They helped destroy the world. Now they have to survive the new one.

For rentboy Nico Fernández, it’s a simple job: seduce a presidential advisor to help cement approval to launch Project Juggernaut. He’s done similar work for General Logan McClosky before, and manipulating people for his favorite client beats the hell out of being trafficked for slave wages in some corporate brothel.

Zach Houtman feels called to work with the most vulnerable outcasts of society. But his father, the Reverend Maurice Houtman, insists that Zach work for him instead as he runs for Senate. Zach reluctantly agrees, but is horrified to see his father leave behind Christ’s mandate of love and mercy to preach malicious zealotry and violence instead. Zach even starts to suspect his father is working with fundamentalist terrorists.

When Project Juggernaut accidentally unleashes a deadly plague that claims billions of lives, Nico and Zach are thrown together, each bearing a burden of guilt. With only each other for safety and solace, they must make their way through a new world, one where the handful of people left alive are willing to do anything—and kill anyone—to survive.

My Review:
This story is set approximately 100 years into the future, when long military campaigns had decimated the recruitment of soldiers. In this brave new world, wealth is highly concentrated, and poverty is likewise concentrated–in corporate-owned slums. The ways out are not plentiful, but soldiers could get their families out, and people could take up prostitution, legally, if they worked for a corporate brothel. Education was only for the wealthy, because who else could afford to download their digital lessons?

Nico is a rentboy in a special place–his mother broke away from her corporate brothel and opened a boutique business in providing educated, charming companions to the upper echelon of society. He has all the advantages of his courtesan education, including the regular clientele of Gen McClosky. Nico steps in and accepts a job for McClosky to ‘entertain’ a high ranking advisor: Secretary Littlewood. The night goes according to Littlewood’s sadistic plan, leaving Nico wrecked–and especially so when he learns what his efforts enabled: green lighting Project Juggernaut, infection of several army battalions with the Bane Alpha virus to give them super strength, super agility, advanced stamina and healing power–but also turning their blood into a chemical weapon. When cut, any non-Alpha immune person would contract Bane Beta and become violently ill with a terrible flu. Only, something goes epically wrong. (PS, this is not a spoiler if you have read STRAIN)

Zack Houtmann is a former divinity student working on his father’s, Reverend Maurice Houtmann, political campaign, and he’s not happy about it. He struggles with the anti-homosexuality message being touted by his father and also the lack of compassion he sees displayed by his father and younger brother, Jacob. It’s not a small thing that Zack seemingly overhears plans of a terrorist hate-crime to coincide with his father’s campaign kick-off. As the virus is unleashed on American soil, Zack is forced to hole up with his increasingly paranoid and zealous father and Jacob.

Nico is saved from the virus by the guilty hand of Gen McClosky–who also sets Nico on his way once the worst of the outbreak has happened. Nico and Zack cross paths in America’s crossroads–Indiana, en route to the survivors’ camp in Colorado Springs. Getting there is quite the battle, but surviving quarantine and staying is even more dangerous.

This is a fantastic post-apocalyptic story with great characterization and incredibly well-crafted plot tie-ins to STRAIN. We meet the Jugs (infected soldiers) and witness the crippling issues of starting society over. Zack and Nico develop a love story, but it is one of mutual self-sacrifice. Expect more bitter than sweet in this book, and expect to immediately want to jump into STRAIN if you have not read it–or BANE, STRAIN’s sequel–if you have. The book has the typical zombie-like menace, marauding revenants who are just as deadly as the Jug’s toxic blood, but it is the uninfected humans who provide more terror. Their justifiable paranoia leads to inhumane action–it’s a cruel, cruel world for real.

Interested? You can find JUGGERNAUT on Goodreads, Riptide Books, Amazon and Barnes & Noble.