Hi there! Today I’m featuring a contemporary romance set in my hometown: Chicago! THE MILLIONAIRE AFFAIR, third in the Love in the Balance series by Jessica Lemmon, is a fun steamy read with a feel-good ending. 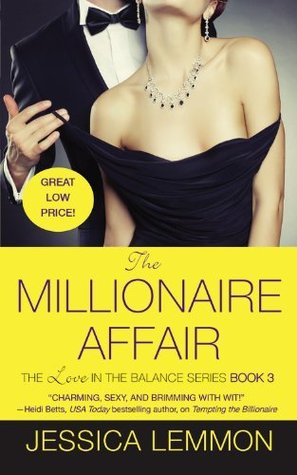 Millionaire ad executive Landon Downey has a policy: no romantic relationships allowed. So when he’s saddled with his six-year-old nephew for a week, he doesn’t think twice about asking Kimber Reynolds to act as live-in nanny. What he doesn’t expect is the undeniable attraction to the woman he hasn’t seen since they were kids. And not only does she like him back-she suggests they work their way down a list of extracurricular activities in the bedroom. How can he resist?

Kimber wants to prove once and for all that she can love ’em and leave ’em with the best of them. All she has to do is keep her sixteen-year crush on Landon out of the equation. No problem . . . until she realizes she may not be the only one whose heart has gotten completely tangled up in their no-strings agreement.

My Review:
Landon is in a fix–he’s a perfectionist business owner AND he’s a doting uncle. But, he’s not a care giver. Scheduled to watch his nephew while his widower brother is having a retreat is more of a challenge than Landon can meet. Plus, he’s got a HUGE contract int he bablance at his ad agency and needs to micromanage his office. So he calls in the Big Guns:  his sister. Unfortunately, she just took off the previous week to watch Lyon and her boss (Landon!) is a slavedriver…

She does, however, recommend her childhood friend Kimber to work as a nanny.

See, Kimber lives in Chicago–not far from Landon’s Magnificent Mile penthouse condo. Kimber owns a boutique selling upscale resale clothes and her own designs. While she’s making money, she hasn’t earned enough to buy out her business partner-slash-ex-boyfriend. With the money Landon’s offering she could get her business going exactly right. If only she doesn’t fall into a puddle of admiration when she crosses the threshold–Landon’s always caught Kimber’s eye…and heart…and quivery girly-bits.

Living in close quarters with the grown woman Landon only remembered as his sister’s frizzy-haired-brace-faced friend proves to be a difficult proposition. Kimber is stunning, and friendly, and engaging. She dotes on Lyon as if he were her own son, and Landon is considering some very wanton thoughts when she’s in the room. Or, on the phone. Or, anywhere.

In fact, they fairly steam around each other. Kimber cannot believe the wealthy man who usually dates willowy models could be interested in her bootylicious self, but then, she’s NOT going to get serious.

Kimber and Landon are really a cute couple. They have some D-Lish smexytimes unencumbered by the risk of their hearts. They share affection, and lust, but soon they share a whole lot more. Kimber is torn–she wants more with Landon, but doesn’t want him controlling her life. Landon wants into Kimber’s world–in whatever capacity Kimber will have him–but his desire to help sometimes comes off as HOLY FREAKING COW TOO MUCH. Still, I adore main characters who take time to figure things out, as Landon and Kimber do.

Oh, and it looks like Landon’s revised list–featuring Number 11–is just the start of their very naughty future.

Interested? You can find THE MILLIONAIRE AFFAIR on Goodreads, Amazon and Barnes & Noble. I received a copy of this book via NetGalley. This is my honest review.

Jessica Lemmon writes sexy contemporary romances with a squeeze of humor for Grand Central (Tempting the Billionaire, Hard to Handle) and Entangled (If You Dare).

She is an artist, dreamer, former meateater, fun-loving, fast-talking wife, and a den mother to two dogs. She loves to hear from her fans.