Hi there! Today I’m sharing a review for a new M/M contemporary interracial romance from new-to-me author Jayce Ellis. JEREMIAH is the first book in her High Rise series. This urban romance features a black, mid-30s, closeted paramedic falling hard for a wealthy, queer, white man who’s trying to get his rambling life on track. 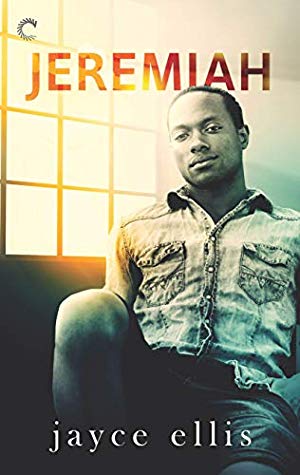 About the book:
Jeremiah Stewart’s sexuality is no one’s business. Not that he’s hiding it. When—if—he finds the right one, he’ll absolutely introduce him to Mom. But a late-night brush with a sexy stranger in too much lip gloss has him rethinking nearly everything…

To Collin Galloway, direction is a four-letter word. Sure, he hates his job, he hates living with his parents and he really hates watching everyone move on without him. But he doesn’t know what he wants to do, long-term, and he won’t figure it out by thirsting over Jeremiah, the superhot, superintense paramedic who is suddenly everywhere Collin looks.

When Jeremiah’s faced with losing all he’s worked so hard to build, he reluctantly accepts Collin’s help. They’re both determined to stay professional…which works about as well as either would imagine. But Collin only does closets with clothes, and Jeremiah has to decide if he’s finally found the one worth bringing home to Mom.

My Review:
Jeremiah Stewart is in his mid-30s and an experienced paramedic working in the Washington D.C. area. He’s a black man who became the “man of the house” at the age of 6 when his father disappeared from their lives leaving his mother to raise the four kids, seemingly on her own. He is gay–out only to his best friend–and lives in a high rise condo. One hot June night he’s arriving home and finds a slender whit man with booty shorts, eyeliner, and lip gloss wrangling two drunk friends into the elevator of his building. The guy is cute, and clearly overwhelmed, so Jeremiah valiantly assists. He would like to get to know the cutie some more, but the stranger shuts him down almost immediately. Maybe he’s dating the dude who’s passed out drunk? JEremiah can’t tell, but he also can’t forget the man.

Collin Galloway is 29 and a college grad working as a pool secretary in a law firm, a job arranged by his wealthy father–who is a longtime friend of one of the firm’s partners, Mr. Carter. Collin lives in his old childhood bedroom in his parent’s posh condo, which his father resents. He has strained relations with his parents, who had him late, after they’d already shipped his older sister off to boarding school. Collin was primarily raised by nannies and refused to go to boarding school when his last nanny quit. He feels like an outsider in his family, and has really close ties with a childhood friend, Lizzie, and Ryan–with whom he’d unknowingly shared an ex-boyfriend in college. He often crashes at Lizzie and Ryan’s apartment on the weekends to avoid being around his parents.

Collin is totally drawn to Jeremiah, but he lacks confidence due to what he feels are low circumstances–drifting through a job, sponging off his parents, and not being a full-adult despite his age. Jeremiah looks way too put-together to suffer a flight man like Collin, right?

A 4th of July incident reunites them–with slightly better results than the first meeting. And another run-in at a local cafe gets them to exchange numbers–Lizzie’s gratitude becomes an offer for Collin to re-work Jeremiah’s resume in search of a new job. In this effort, Collin’s nerves and insecurities disappear. The rapport strengthens and provides a nice segue into sexytimes. Both men have family issues, and isolation problems–there are fights and separations that neither has anticipated. They are different on the outside, but they mesh well. When Jeremiah gets some time off, he convinces Collin to play hooky from his new position as Mr. Collin’s temporary secretary. It is ultimate sexy bliss, until one of Jeremiah’s siblings gets clued in on his sexuality–and it ends up with a bail-out and a freak out–not necessarily in that order.

This is a sweet and sexy romance, with two very different men, who find full acceptance with one another. Jeremiah is awed by Collin’s resilience, and Collin is attracted to Jeremiah’s brawn and determination. Being in the closet isn’t easy, and Collin clings to the idea that Jeremiah will introduce him to his mother. The Stewart family needs to have some heart-to-hearts to clear up the mystery of what happened to their father, and how this affected the whole clan. There is a lot of emotion that needs to get sorted out, but the end is happy, with a lot of support throughout the ending. This is the first book in the series, and I would be eager to read on.

Interested? You can find JEREMIAH on Goodreads, Carina Press, Amazon, Barnes & Noble, and Kobo. I received a review copy via NetGalley.

About the Author:
Jayce Ellis is an author and an attorney. You can connect with her on twitter.