Hi there! Today I’m sharing a review for a supernatural epic from Jamie Le Fay. AHE’EY had been published as a serial, but is now collected into one epic book for her readers to enjoy. It’s a little bit angel, a little bit mortal and a lotta bit confrontational.

Catch my review below and be sure to enter the book giveaway, too! 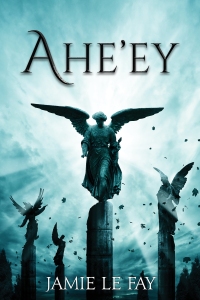 About the book:
Morgan’s feminist books didn’t prepare her to deal with the dashing Gabriel and the land of Ahe’ey.
Morgan is a dreamer, change maker and art lover. She is a feisty, slightly preachy, romantic feminist full of contradictions and insecurities. Morgan uncovers a world where women have the power, and where magic is no longer just a figment of her wild imagination. Sounds like a dream, but it may, in fact, turn into a nightmare.

The world of the Ahe’ey challenges and subverts her views about gender, genes, and nature versus nurture.

The strong and uninvited chemistry between her and the dashing Gabriel makes matters even more complicated. His stunning looks keep short-circuiting her rational mind.

“Your warriors, they can help secure the area. It’s just for a couple of hours.”

“Are you out of your mind? Has Viviane heard about this? My warriors protect our people from those who threaten our security,” she spoke decisively.

He adjusted his tone, trying to reason with her. Silk and honey flowed from his voice and his eyes. “Sky, we were once—”

“Don’t you dare. Don’t you dare!” She leaned in, speaking to his face. Her hand squeezed the hilt of her sword. She gritted her teeth, responding to his silence. “Where were you when we battled the Hu’urei for over twenty years? Where was the powerful prince of Ange’el as my warriors died in the battlefield, crushed by the dragons? Why would I risk the safety of Ahe’ey to respond to the whims of a spoiled coward? Go back to your rich city penthouse Ange’el. You don’t belong here.” Her eyes and her words were razor-sharp spears.

She mounted the horse and galloped away.

His guilty conscience endured her justified anger and her hate for him. He wore her wrath as a reminder of his weakness, of his betrayal. He gave Sky her rage, and he would suffer it for the rest of their lives. The tension between their roles at Ahe’ey only worsened their frail and fractured relationship. Their agendas were different. She was ultimately responsible for the security of the people of Ahe’ey, and within its borders she was as powerful as the queen and king. She was to be obeyed and rarely needed her mighty army to enforce her orders. Gabriel worked to hide any clues of Ahe’ey’s existence from the humans. In parallel, he sponsored and lobbied for technological and political progress so that Ahe’ey’s secrets could one day be disclosed.

My Review:
Morgan is a super woman of her own making unawares that she’s descended from a superrace that still dwells on Earth. She’s captivated and flummoxed by Gabriel, a man of that race who lives among humanity. As Morgan learns more about this world-within-a-world she gains power she hadn’t expected. And, maybe, finds love.

AHE’EY is an epic fantasy about superbeings who live amongst us human on Earth, told from myriad viewpoints that jump in and out of the mortal realm on Earth. That’s normally a good thing, for me, because it means I’m always in the center of the action as a reader. However, the verbose descriptions between the human realm and the Ahe’ey were exhausting. The complete collection here was about 200,000 words, and I think we could have done without a third of them. Plus, honestly, I was put off by the mundanity of it all. When I’m reading Fantasy, I want to be transported. I don’t want the dialogue to sound like a contemporary YA/MG story.

The battles between the castes seemed forced, and the “drama” of this life-and-death arrangement also didn’t make sense to me. I’m not a big women’s studies genre reader, because I’m all about the romance, and this didn’t draw me to the cause, I must say. It felt very formulaic, and I didn’t connect with any of the myriad characters as a result. The pace bogged, like I mentioned, with large chunks of dense description which damped my interest right quick. The lackluster dialogue sealed Ahe-ey’s fate, for me.

I jumped on this book based on the recommendations, but I wasn’t in love with the execution. I think, for people who really love Fantasy and descriptive literature, you might find this intriguing.

Click on this Rafflecopter giveaway link for your chance to win one of TWO paperback copies of AHE’EY.
Good luck and keep reading my friends!

Jamie is an accomplished writer and speaker that focuses mainly on topics related to girlhood, feminism, gender equality, and the misrepresentation of minorities in media and marketing.