Hi there! I’m so excited to share a review for the FINAL book in the Will and Patrick series by Leta Blake and Alice Griffiths. HAPPY ENDING sounds like the pot-of-gold for Will and Patrick, two strangers who married while drunk in Vegas and are now, semi-reluctantly, building a life together–but NOTHING has been easy for these two! You’ll need to read the previous episodes, (WAKE UP MARRIED, MEET THE FAMILY, DO THE HOLIDAYS, FIGHT THEIR FEELINGS, and MEET THE MOB) first, for this one to make any sense, however. It’s certainly worth your time; I’ve enjoyed them all! As the final book it’s got the HEA we all desire, and delicious feels to wreck ourselves on first!

Catch the excerpt, my review and enter to win a copy of any of the Will and Patrick episodes below. 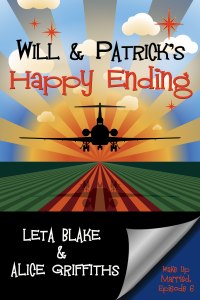 Patrick has finally accepted that he’s in love with Will, but his newfound determination to do something about that runs up against his father-in-law’s mobster plans. Though just what those plans are have as yet to be determined. As far as Will and Patrick can tell, they consist of blowing through town, wreaking small havoc, and turning the Patterson family’s lives on end.

Will must face the truth about his family before he can fully come to terms with his feelings for Patrick. And Patrick has to decide if this whackadoodle world is something he truly wants to be part of forever.

Episode 5 of 6 in the Wake Up Married serial.

Will leans back heavily in his desk chair and sweat pricks the back of his neck. A tight band squeezes his chest, but he manages to ask, “What do you mean we can get divorced? Did Frankie and his new bride call it quits?”

Eleanora’s throaty chuckle comes through the phone. “No, darling. They’re still madly in love for now. It’s Romeo Molinaro we have to thank for this piece of good fortune.”

Will frowns, mind scrambling through dozens of half-forgotten or never-known relatives.

Zeno is the current boss of the Molinaro family, his father’s uncle, and a terrifying man.

“Unfortunate marriages are going around like the flu in this family. It seems Romeo got hitched to a fetching ragazza. Charming, beautiful, young—the usual. But, as it turns out, also a spy from the Korotayev crime family in New York.” Nonna clucks over the line. “Oh, men. Following the dictates of their little heads always leads to their downfall.”

Bright sunshine screams through the window of the room, ricocheting around and giving Will an instant headache. “If she’s a spy, why arrange a divorce? Why doesn’t Zeno just—” Will drags his finger over his throat even though Nonna can’t see him. “Off her?”

“How like your father!” Eleanora puffs her disapproval. “No, no, darling. That’s no solution. Besides, Romeo begged his father not to kill her. Apparently he’s still smitten. But don’t worry. There will be some other kind of recompense paid, I’m sure. William, the less we know about it all, the better.”

Will exhales slowly. He stands up, turns to the windows behind his desk, and adjusts the blinds, dimming the light. “Romeo’s still in love with her? But he’s going to divorce her anyway?”

“Presumably. Regardless, Zeno’s quote-unquote discovered a loophole in the Trust that smashes through the edict regarding love matches and divorces.”

“Dad knew about this the whole time he was in town, didn’t he? He was just messing with us.”

“We’ll never know for sure, darling. All I know is he told me about Romeo’s situation and Zeno’s solution this morning before his flight out. Regardless, the issue is resolved. You and your doctor are free to handle your marriage as you see fit and Good Works is safe.”

Will stomach knots hard, and he stares at the lines of light the closed blinds leave on his desk. “We could file for divorce immediately? Today?”

No, Will! You’ll regret this!!!–was what I wanted to scream at my iPad when I got to this part of the book!

My Review:
This is the final episode in the Will and Patrick serial, and must be read in order.

Will and Patrick met in Vegas and got very drunk and very married in one night. They would have separated, but Will convinced Patrick to stick it out until he could legally untangle them without losing millions of dollars in his Good Works trust–money that would have returned to Will’s mafioso family’s coffers in the event of a quickie divorce. They have been through the emotional wringer back in Will’s hometown of Healing, South Dakota. Patrick, a newly unemployed neurosurgeon, has been hired by the hospital Will runs and as the days and weeks and month have passed both Will and Patrick have developed real loving feelings for the other–but neither of them is brave enough to admit it to the other–both believing their marriage has an expiration date and not wanting to “humiliate” themselves by loving a man who doesn’t return the sentiment.

This installment is the last–and best!–and promises an HEA in the title, for goodness sake. That doesn’t mean it’s easy, however. Nope, this serial is all about the long game, and Will knows he loves Patrick, but he also is afraid that Patrick only loves him because of their forced proximity. When the possibility of a no-mess divorce is made real, Will wants to take it–and give himself and Patrick the space to find love on their own terms. One of those “if you love him, set him free” scenarios that absolutely flips Patrick’s wig.

Patrick has barely known love in his life, and Will telling him he needs this break is a club to the head. He’s heartbroken and miserable and absolutely resolved on gaining Will back, once their one-month hiatus is complete. That doesn’t mean he’s not angry. Because he is. He needs Will in his life, and not having him is the crap frosting on the cow-pattie-pie of things in Patrick’s world. Expect a very caustic man having one after the next personal and professional disappointments.

Not going to belabor this. The break up is hard on both men, and the reunion is fast, furious, and a little filthy. It’s a yummy ending with a pair that I almost feel at home with, after nearly 900 pages of their fictional misadventures. Such a fantastic ride. It took me a bit of time to warm to them, particularly prickly Patrick, but they are now my bosom pals and I’m so glad I stuck with the books!

Interested? You can find Will and Patrick’s HAPPY ENDING on Goodreads and Amazon. You can check out the entire series here.

Clink on this Rafflecopter giveaway link for your chance to win any of the Will and Patrick episodes. (Two winners!)
Good luck and keep reading my friends!

About the Authors:
Leta Blake
Author of the bestselling book Smoky Mountain Dreams and the fan favorite Training Season, Leta Blake’s educational and professional background is in psychology and finance, respectively. However, her passion has always been for writing. She enjoys crafting romance stories and exploring the psyches of made up people. At home in the Southern U.S., Leta works hard at achieving balance between her day job, her writing, and her family.

Alice Griffiths
A long-time reader of romance novels, Alice Griffiths finally took the plunge into writing, teaming up with best-selling author Leta Blake for the ‘Woke up Married’ serialized comedy. A lover of tropes, Alice enjoys mining old ideas and putting a fresh, funny spin on them. Formerly working in the newspaper industry, Alice is now an art curator. She lives in Sydney, Australia.