Hi there! Today, I’m sharing a review for a TBT M/M contemporary “dramady” from James Gregor. GOING DUTCH features a single gay graduate student in NYC struggling to find direction, purpose and love in his life. 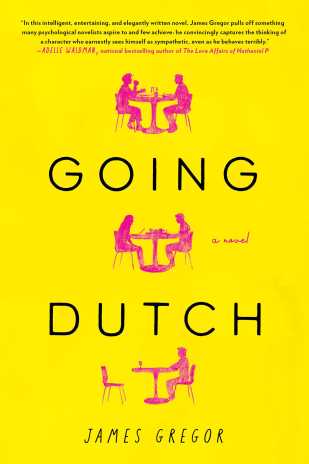 About the book:
Exhausted by dead-end forays in the gay dating scene, surrounded constantly by friends but deeply lonely in New York City, and drifting into academic abyss, twenty-something graduate student Richard has plenty of sources of anxiety. But at the forefront is his crippling writer’s block, which threatens daily to derail his graduate funding and leave Richard poor, directionless, and desperately single.

Enter Anne: his brilliant classmate who offers to “help” Richard write his papers in exchange for his company, despite Richard’s fairly obvious sexual orientation. Still, he needs her help, and it doesn’t hurt that Anne has folded Richard into her abundant lifestyle. What begins as an initially transactional relationship blooms gradually into something more complex.

But then a one-swipe-stand with an attractive, successful lawyer named Blake becomes serious, and Richard suddenly finds himself unable to detach from Anne, entangled in her web of privilege, brilliance, and, oddly, her unabashed acceptance of Richard’s flaws. As the two relationships reach points of serious commitment, Richard soon finds himself on a romantic and existential collision course—one that brings about surprising revelations.

Going Dutch is an incisive portrait of relationships in an age of digital romantic abundance, but it’s also a heartfelt and humorous exploration of love and sexuality, and a poignant meditation on the things emotionally ravenous people seek from and do to each other. James Gregor announces himself with levity, and a fresh, exciting voice in his debut

My Review:
Richard is a gay graduate student in New York City struggling to complete his doctoral thesis due to writer’s block. His living money is dependent upon him continuing to write papers and win grants, and he just…can’t. He’s eternally depressed, and pines for his best friend–a situation that doesn’t get any better.

It’s a bit of a crisis, this not having money, and his advisor is less than helpful. Richard’s fortunes seem to change when one of his fellow grad students, Anne, offers to help him with his writing. All she wants is his company. And, not in a sexy way. She’s wealthy and lonely, and they get along. They’re friends…of a sort. Richard actually doesn’t have a lot of close friends. Richard isn’t above having Anne write any and all work on his behalf. He doesn’t outright take credit for all the work she’s done, but he also doesn’t admit to how little of the writing he does in their “collaboration” either.

Richard looks for love in the way of young urban men in the digital age–via his apps. And it seems like he gets a bunch of duds. One disastrous date with Blake seems to put him off looking for men altogether, and that’s okay, because he has Anne’s odd fascination/friendship to prop him up and help him feel somewhat worthwhile. Spoiler alert: Richard isn’t really that worthwhile, at least, that’s how he feels and that’s how he came across the page to me, as a guy biding his time fore the Bigger Better Deal he couldn’t actually accomplish for himself.

As Richard commits more and more of his time to Anne and her desires, while sponging off of her generosity, he and Blake actually make a latent connection. And, it seems like Richard will FINALLY make a good choice, one that will jump start his lackadaisical approach to everything. And…I got my hopes up too soon on that one.

This book is billed as a “dramedy” and a comedy of manners, but my Midwestern manners didn’t align with Richard’s by any stretch. I thought I could connect because I was once a starving grad student who had to write her thesis in order to get paid, too. Unfortunately, Richard’s a guy I wouldn’t want to be friendly with, for fear he’d be looking down at me while simultaneously holding his hand out for a payout. His handling of relationships with both Anne and Blake definitely qualified as falling into the “user” category, and that’s never how I like my MCs. Despite the dubious character flaws, I found the prose interesting and compelling, causing me to read on even when I knew I was traveling into parts I wouldn’t care for. And, even though I didn’t much care for any of the characters or their choices, they had a gritty authenticity and enough texture that I could see these vapid sort of folks as real beings. They were just the sort of people I don’t like to spend time with, even when it’s time on the page. I’m sure the plot is like some great and timely show on TV, or a movie about urban folks doing their urban thing, but I don’t watch a lot of that stuff, so it didn’t resonate with me as a reader.

That said, if you like contemporary urban gay fiction the book might be a winner for you. It had some great press behind it upon release, which was why I chose to read it.

Interested? You can find GOING DUTCH on Goodreads, Amazon, Barnes & Noble, Apple Books and Kobo. I read a review copy provided by NetGalley.

About the Authors:
James Gregor holds an MFA in Fiction from Columbia. He has been a writer in residence at the Villa Lena Foundation in Tuscany and a bookseller at Shakespeare and Company bookshop in Paris. James was born and grew up in Canada. Going Dutch is his first novel.