Since opening my blog I’ve had the best time interacting with authors and other bloggers and publishing folks or many stripes. For an aspiring author it’s been such a kick to learn all the stuff that happens AFTER you finish a book. Building these connections is a wondrous benefit to doing something I love–reading.

In this way, I feel blessed to find authors who reach out and embrace bloggers and what we do/how we support and nurture their work in a very real sense. Karen Erickson aka Miss Monica Murphy is one such author–and when she was offering up her newest release for review? I was all:


GAME FOR TROUBLE is the second in her Game For It series–and I seriously loved it. It drops TODAY–so here’s a sneak peek!

But, before I chat about it, perhaps we should set the scene with GAME FOR MARRIAGE–the one that started it all… 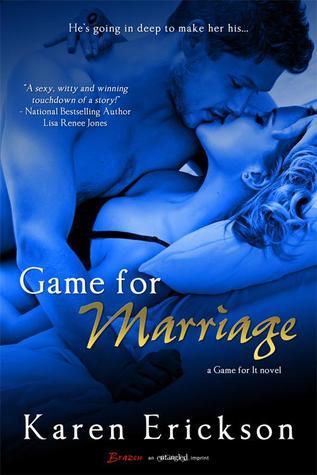 Jared Quinn is a Super Bowl winning quarterback and a rake. Yeah, he’s not just been around the block, he freaking owns the block, and could have limos drive him and his gals around and around. His team’s new owner isn’t happy with his bad boy image. Too much negative publicity and a nagging injury are threatening his contract. The PR department has a brilliant plan: get Jared married–toot-sweet…

Sheridan Harper is an artist with a funding problem. Though she has a beautiful studio, she can barely pay the expenses. It’s make-it-or-break-it-time and she’s not sure she has what it takes to make it. She meets Jared at a local festival and his admiration for her paintings lulls her into a drink, and another, and a wild night of well…hot monkey love.

Little could she have predicted Jared appearing at her studio the next morning with an (in)decent proposal.

One year of marriage + Non-disclosure = Money and publicity for her studio.

Well, she does. Before you all start yelling “Sell out!” and burning your PRETTY WOMAN VHS’s in protest, Sheridan negotiates a No Sex clause in the contract thinking this will protect her from actually becoming attached to Jared. See, she’s smitten. Jared’s a bona fide studmuffinsexgodextraordinaire, and Sheridan’s horrified that she’ll fall totally heart over heels only to have Jared walk away after 365 days of fake wedded bliss.

Only, she has no idea he’s smitten too.

Oh! It’s a fun, fun, FUN read. The usual complications ensue with a push-pull of sexual tension and eventual crash-and-burn. But yeah, it’s handled well and the HEA is de-lish.

For part deux, GAME FOR TROUBLE, Jared’s teammate and BFF Nick Hamilton has it bad for Willow 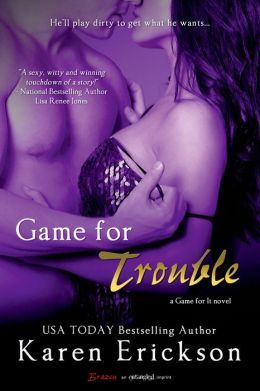 Willow’s the stereotypical poor little rich girl. Her daddy’s a powerful entertainment lawyer and her mommy’s long gone to Europe. Willow’s desperate to make it on her own–and is finally finding success as a specialty caterer. All she needs is a great property to kick her business plans into fast-forward. Right now, it’s all about her career, and not at all about her love life, which pretty much sucks since she was royally dissed by Nick Hamilton six years ago.

Reunited by their mutual friends, Nick Hamilton is finally in finally in position to reclaim the girl he let go–at her father’s strong request [read:  blackmail]. He may have moved on in body, but never in spirit and Fate seems to have aligned their stars. He owns the VERY property Willow wants to lease. And he’s willing to rent it at a discount, if she’ll agree to 10 dates–with him.

The negotiations are fierce, and in the end they settle on 8 dates, but the die is cast. These two are gas and blowtorch. When they aren’t fighting, they’re naked. Okay, slight exaggeration. But seriously, there’s plenty of naked times…

Still, Willow can’t fully trust Nick, he’s surely going to abandon her–again–just like everybody else has. As steadfast as Nick tries to be, he’s put-off by her constant reticence. The break-up-to-make-up isn’t long and the HEA is as believable as any other.

Interested? This book comes out TODAY–Pick it up here:  GOODREADS  AMAZON  Barnes & Noble

As these two stories follow the love-lives of two football players, it’s clear that our next Game For It novel will feature another teammate. What do I say to that?

So, if you read either of these books remember to let me know what you thought of them in the comments.

And, as always, keep reading, my friends! 🙂