Hi there! Today I’m sharing a newly released contemporary YA title from Frank Portman. KING DORK APPROXIMATELY is a sequel, and I haven’t read the previous title, but that’s cool. Because this book sucked me in, and I didn’t miss out. 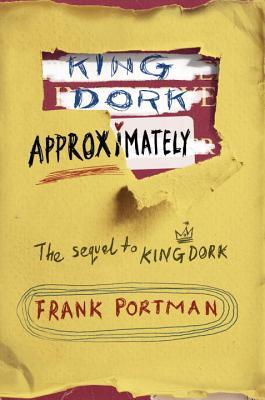 From Frank Portman comes the long-awaited sequel to the beloved cult classic King Dork, of which John Green, author of The Fault in Our Stars, said, “Basically, if you are a human being with even a vague grasp of the English language, King Dork will rock your world.”

Aside from the stitches and the head wound, Tom Henderson is the same old King Dork. He’s still trying to work out who to blame for the new scar on his forehead, the memory loss, and his father’s mysterious death. But illicit female hospital visitations, The Catcher in the Rye, and the Hillmont High sex-pocalypse have made him a new man.

What doesn’t make you stronger can kill you, though, and tenth grade, act two, promises to be a killer. Tom’s down one bloodstained army coat, one Little Big Tom, and two secret semi-imaginary girlfriends. Now his most deeply held beliefs about alphabetical-order friendship, recycling, school spirit, girls, rock and roll, the stitching on jeans, the Catcher Code, and the structure of the universe are about to explode in his face. If only a female robot’s notes could solve the world’s problems, he’d have a chance. But how likely is that?

My Review:
It’s 1999 and Tom Henderson is a kid with a conspiracy-filled brain. He’s sure one of his former teachers killed his father years ago. This is based upon a whacked-out Catcher Code he believes said-teacher followed, and he’s convinced the ‘psychotic normals’ are after him. Case in point: he had previously been attacked by a tuba-wielding mob and had his head bashed open.

While recovering from this horrific attack, Tom spends time with his bandmates, Sam Hellerman and Shinefield, composing horrid music (with abhorrent drumming) and assembling his case against the universe for his oppression and the (possible) murder of his father. Tom weathers the Y2K-Not-Meltdown, but big change is on the horizon for King Dork–Hillmont High, scene of his hazing and serial brutality at the hands of the normals, is closing.

Oh, and King Dork has other big news:

And maybe you’re thinking I’m just being cagey, and it will turn out that the “it” that was done, with the girl, by me, was something like baking cookies, or playing Monopoly, or fetching a pail of water from the old well up the hill. But I assure you, it means what people usually mean by “it.”

So! This adventure takes us through the vagaries of Tom’s completely plain life, in a way that is spectacularly textured. Tom’s agitated and verbose narration is a feat of ingenuity. The way he describes his school’s use of alphabetically ordered seating, is well…

The state, having determined that its interests would be best served by turning the lives of its citizens into a living nightmare at as early an age as possible, had entrusted the day-to-day soul-crushing process to the Santa Carla County School District. And the District found that its iron fist could most efficiently grind the aforementioned could into a fine, terrified, inert paste if the bodies they animated were clearly marked and organized in a rigid, alphabetically ordered grid, like books or socket sets, or fireworks.

Tom’s home life is in more dire straights than normal: his apathetic mother is more so, and his sunshiney, platitude-spouting step-father Little Big Tom has moved out due to unknown causes, though his sister, Amanda is sure it’s because of some panties in a gym bag–not that Tom gives Amanda’s theory any credence.

In Tom’s new school, he’s not the King Dork. He’s a Bone, trombone, that is, and part of the Pep Band, because, astoundingly, Clearview High has…pep.

I had long ago given up trying to discern any hint of sarcasm, or mockery, or even mild irony in this sort of behavior at Clearview High School: there really wasn’t any. These people, as crazy as it seems, really were this into it, and the “it” they were into, believe it or not, was simply high school. Damnedest thing I ever did see.

While engaging at Clearview, Tom finds himself a friend, Roberta, the Female Robert, and her best-ish pal, Pammelah, who inexplicably becomes Tom’s girlfriend.

The story is basically about Tom coming to terms with life, finally fitting in (sorta), being ostracized yet again, and realizing that his take of the universe is subject to re-evaluation from time to time. He invests himself in his music, and finds a better path, as it were. Plus, he makes out a lot with Pammelah, which is pretty cool for a 15 y/o boy.

The side characters are rendered so caringly. Sad-sack Little Big Tom and his uber-paranoid friend Flapjack who make attempts to teach Tom to play guitar. Sam Hellerman, and his pill-popping, motivational tape listening ways pining for a girlfriend. Even Roberta the Female Robert (who later becomes the Female Robot in Tom’s head) is fleshed out in girly-notes that are harrowing and hysterical at the same time.

I loved the voice, but sometimes I got lost in the long-winded sentence structure and had to re-read. Tom is an engaging narrator. And I mean that literally: he talks to the reader directly, all the time, which is a fun style for me. I dug the references about music and vinyl and Y2K and clunky cellphones, and I imagine other readers will as well, if not for nostalgia, simply because Tom makes it all so ludicrous and funny. Poor Sam, with his expensive phone and no one to call him becomes a running joke, and one I think tech-savvy teens today might find amusing. The whole awkwardness angle, and being a hopeless “dork” in the pre-anti-bullying timescape is mercilessly exploited what with the ‘psychotic normals’ always on the prowl. Tom’s deadpan wit was so cutting, I’d nearly hurt myself laughing, at points. I really enjoyed the book, and expect teen readers will, too.

Interested? You can find KING DORK APPROXIMATELY on Goodreads, Amazon, Barnes & Noble and other outlets, undoubtedly. I received a review copy of this book via NetGalley.