Hi there! Today I’m sharing a review for a fantastic supernatural M/M contemporary romance from Ana J. Phoenix. FOR NEVER AND ALWAYS is an emotional tale about two friends who had secretly loved one another finding themselves in the afterlife. It’s a total tear-jerker…

Catch the excerpt, my review and the giveaway below. 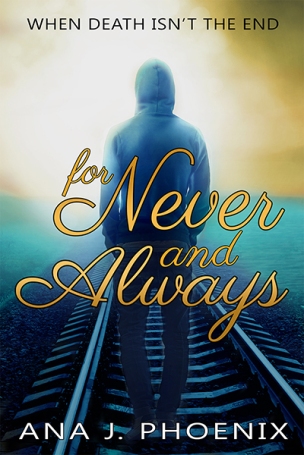 About the book:
Seth finds himself alone at an abandoned train station, with no idea what happened, or how he got there. He boards a train, only to discover it’s a special express transporting the recently deceased to their final destination.

The conductor tells him he’s having a near-death experience. Seth wonders if it has something to do with his violent boyfriend, but that doesn’t matter. All that matters is getting the hell off the train before he actually dies. But when he spots his best friend and secret crush among the traveling dead, the urge to leave fades…

For a minute, they sat in silence with only the rumbling of the train disturbing the quiet. When it became apparent that Seth wasn’t going to start speaking, Carter asked, “Still want to go on that road trip?”

“Mhm… If we could go together?” It wasn’t possible, of course, but Carter wasn’t interested in reality right now. One reason he hadn’t told Seth he was dying was because he’d enjoyed making all those unrealistic plans, after all, and he still did.

“I would go anywhere with you.”

“Yeah?” Carter let go of Seth’s neck and tightened his grip around his shoulder. “Where would you like to go first?”

Seth looked at him with that certain shine in his eyes he got when he talked about technology and space and all that. “The Science Fiction Museum and Hall of Fame,” he said, predictably.

“It’s true, though! We created the Internet and launched mankind into space. What did zombie fanatics ever do?”

Seth scoffed. “We have Star Wars and Star Trek and—”

“Aren’t those the same thing?”

Carter laughed. He’d rarely seen Seth look so offended. But whatever it was Seth had been worrying about earlier, he wasn’t thinking about it now, and that was a win.

Seth and Carter have been friends since forever. They haven’t kept in touch over the last couple years because Seth’s controlling and abusive boyfriend, Tony, has isolated him from his few friends and family. Seth felt this was acceptable, to some degree, because he harbored a long-time crush on his straight best friend. A good boyfriend wouldn’t talk to guys he finds attractive, right? And, especially not when his boyfriend doesn’t want him to do so, right? Besides, Carter’s at college, and he has a girlfriend. He doesn’t want to hear Seth’s troubles…

The book opens with Seth on a strange train platform, uncertain how he arrived there, and wondering how to get home so he can make Tony’s dinner. Immediately the reader knows that something awful has happened to Seth, and that Tony has likely had some role in it. A ghostly train arrives and Seth steps aboard. The conductor gives him the low down–it’s a train of souls on the way to their final destination. Thing is, Seth’s not dead…yet. He has the power to step off the train at any station, as long as the doors remain clear to his vision. If he lingers, however, that option will disappear, and Seth will be dead. While Seth sorts out if he should disembark, he’s shown to his cabin, and his roommate is Carter.

Carter has only 6 stops remaining until he’s a lost soul. He knows this, knows he must make peace with himself and his choices, but he’s struggling. He hid his disease from the two people he loved most in the world–Seth is one of them–and he’s saddled with regret for never telling Seth that he loved him.

Even now, as they share space and final moments on this train, both Seth and Carter are shielding their deepest secrets from the other. Carter wants Seth off the train, right now, but Seth won’t leave. He can’t remember how he came to be on the platform, and he needs to solve this mystery before he decides if he wants to return. Did Tony beat him into a coma? Was is some other trauma? This makes a difference to Seth; he doesn’t want to return to the living if he’s only going to make the same mistakes.

Carter watches the stops tick off, and is unable to let go of his past–mostly because his love for Seth is so strong. When he finally confesses, it’s not to the reaction he expected. Seth is angry that they never had their chance, and frustrated that Carter hid his bisexuality. These do work it out, over the course of the train ride, and they get their collective houses in order, too.

I’m not going to say more about the plot. It’s fantastic, and heart-rending, and tumultuous. I feel better having read this book, not for any sense of spirituality, but for thinking about my own regrets and soul burdens, and considering how best to let them go. This is a love story, at it’s core. Seth and Carter have an epic love for each other that was never acknowledged in life, but this ride of reckoning allows it time to bloom.

Small flashbacks allow the backstory to be inserted at poignant moments. The clock is always ticking, however, and Seth wishes to linger with Carter forever. Will he? Carter died young, and his regrets are many. Can he clear his soul and enter the afterlife? Or will he be one of the tormented lost souls that claw at the doors of the train whenever it stops? I will say that the book has a happy ending, even if it’s not a convenient as it could have been. I liked that. Hard choices make for good conflict and interesting stories. At each turn we could have had the “easy” answer, and we really never get that, here, which is a credit to the story. I loved the idea of soul mates meeting as souls, and it’s very well handled here. It’s even a bit steamy, which was awesome. Highly recommend!

Interested? You can find FOR NEVER AND ALWAYS on Goodreads and Amazon. It’s a phenomenal deal for $.99!

Click on this Rafflecopter giveaway link for your chance to win a set of Star Wars cookie cutters!
Good Luck and keep reading my friends!

About the Author:
Ana writes m/m romance and erotica. Her interest in hot guy-on-guy action was first sparked by reading scandalous Japanese mangas. A dirty secret she couldn’t resist. In a long bout of insanity – also known as her life — she decided to learn the language and escape to the land of sushi, sumo, and yaoi.

She’s since moved back to Europe to be with the love of her life – delicious European chocolate.