Hi there! I’m sharing in the release day hijinks for Em Petrova‘s FEVERED HEARTS. This is a quickie ménage that packs a lot of heart and a good story into its pages. THIS is an ADULT read. 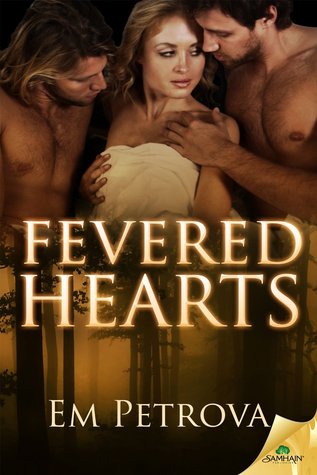 About the book:
When faced with a challenge, it’s best to pool your resources.

Liam Mattson used to play his wife’s body like a fine violin. Until a logging accident dampened his fine motor skills and rendered his legs—and the most important part of his below-the-waist playground—useless.

If only Liam would throw himself into therapy with the same vigor he used to throw into bed, Ivy is sure he’d fully recover. But lately she’s felt adrift, while he’s stuck in self-pity and pre-occupation with a serious threat to his logging business.

When Ward Bose returns from the backwoods, Liam isn’t blind to the heated, guilty glances between his best friend and his wife. And he takes a step he never could have taken if his legs were working—ask Ward to service Ivy in bed.

The moment the three come together, Ward’s heartstrings are tied in knots, and Liam holds them in his fist. But secrets they’re each keeping could tear them all apart…unless they can find a way to share their burdens as easily as they share their love.

Warning: Men who wield big saws know how to care of business—in bed and out.

My Review:
Ward has returned to his western Pennsylvania hometown to help run his family logging company now that his father is on his death bed. For the past six months a poor manager has been running the company into the ground, authorizing an illegal clear-cut of prime forest. Unfortunately, this gross mismanagement of he land has been blamed on another company, one owned by Ward’s former lover’s (Liam) family.

Liam has been wheelchair-bound for the past year since a logging accident. He’s surly and standoffish with his wife, Ivy, barely speaking to, or touching, her. The doctors believe Liam might make a more stable recovery, and even walk again, but he feels diminished physically and sexually and won’t undergo therapy in the event he fails. Plus, he doesn’t know how Ivy will react to finding out that he and Ward were lovers, and a radical activist group is attacking his business as a result of Ward’s manager’s clear-cut….and Ivy’s life is under threat.

Ivy loves Liam like crazy, but finds Ward remarkably attractive. It’s been a bad, lonely year, with no hope in sight as far as Liam’s recovery. She makes ends meet as a court recorder and selling knitted handicrafts, hoping that Liam might snap out of his funk.

Ward is attracted to Ivy, and fully acknowledges that he is still in love with Liam–he attempts to reconnect, and doing so puts him in the right place at the right time, directly between husband and wife. That’s right. Indecent proposal time. Liam asks his former lover and current business partner, Ward, to be his surrogate, and well, there’s some fireworks to this request… The book? It gets hot, and hotter.

The fun thing about this steaming hot ménage story is that there is a story unrelated to all the sexytimes. Ward and Liam have to track down and neutralize the threat to their businesses, and to Ivy. Ivy, for her part, is a smart woman who gets the best of two men. I enjoyed the development of this story, and the relationship, where each partner had his/her say and they all felt equally valued. There are parts that seemed a little physically unrealistic, mostly pertaining to Liam’s recovery of function, but it didn’t detract. Readers who enjoy ménage will love this one.

Interested? You can find Fevered Hearts on Goodreads, Amazon (US and UK), Samhain Publishing, and Barnes & Noble.

Click the Rafflecopter link below for your chance to win one of 4 $5 Amazon or Barnes & Noble gift cards!
a Rafflecopter giveaway