Hi there! Today I’m sharing a review for a M/M fantasy romance from M. A. Grant. PRINCE OF AIR AND DARKNESS is the first book in her Darkest Court series.

About the book:
Phineas Smith has been cursed with a power no one could control.
Roark Lyne is his worst enemy and his only hope.

The only human student at Mather’s School of Magick, Phineas Smith has a target on his back. Born with the rare ability to tap into unlimited magick, he finds both Faerie Courts want his allegiance—and will do anything to get it.

They don’t realize he can’t levitate a feather, much less defend the Faerie Realm as it slips into civil war.

Unseelie Prince Roark Lyne, Phineas’s roommate—and self-proclaimed arch nemesis—is beautiful and brave and a pain in the ass. Phineas can’t begin to sort through their six years of sexual tension masquerading as mutual dislike. But Roark is also the only one able to help Finn tame his magick.

Trusting Roark’s mysterious motives may be foolish; not accepting his temporary protection would be deadly.

Caught in the middle of the impending war, Phineas and Roark forge a dangerous alliance. And as the walls between them crumble, Phineas realizes that Roark isn’t the monster he’d imagined. But their growing intimacy threatens to expose a secret that could either turn the tide of the war…or destroy them both.

My Review:
Phineas Smith is the only human at Mather’s School for Magick. He doesn’t have magick, per se, instead he can pull the magick of ley lines through the earth, a rare and dangerous talent. No one can remember the last human who could do so, and its universally acknowledged that Finn is the oldest living human to wield this power. All previous persons died young due to lack of control–not that Finn’s really controlling things. And, he has to call upon the ley lines to rescue himself time and again from beings bent on capturing him and using him as a power conduit of their own. One of these beings is the Unseelie Queen, who happens to be his roommate Roark’s mother.

Prince Roark Lyne is the Unseelie liaison on campus. He’s gruff and challenging, especially to Finn, but they share an undercurrent of sexula tension that belies all of their interactions. Roark is centuries old, and powerful but it seems that he and Finn have a bit of synergy and symbiosis that allow their powers to mend in ways that could turn the tide of the oncoming Fae war. Their partnership could dissolve if Finn can’t handle the secret that Roark is hiding from him.

The sexual dynamic seems to hover between fated mates and enemies-to-lovers, what with the longstanding animosity, the constant rescues and challenges, and the secret nature of their budding relationship. I thought the fantasy elements were fresh and interesting, and there are lots of cool chararcters to round out the fantasy. It was cool to see the parent-child dynamic here, with its inherent imbalance in power, as Roark brushes against and battles with his mother’s controlling ways to benefit Finn.

This is the first story in the series so, while there is some wrap-up and a resolution to the romance question, we still have a lot of intrigue and tension due to the impending Fae war. Pacing was a bit slow to begin, but really picked up as we approached the climax, and I found myself reading late into the night to get to the end. Finn and Roark do find their happiness, sometimes with explosive results, and their power issues seem to be settled for the moment. I liked the story and would definitely read on in the series.

Interested? You can find PRINCE OF AIR AND DARKNESS on Goodreads, Carina Press, Amazon, Barnes & Noble, and and Kobo.

About the Author:
M.A. Grant has always loved reading and writing, but fell in love with the romance genre when she started working at an independent bookstore in high school. After meeting her husband in college, they began a steady northward migration and are now happily living in the rugged beauty of Alaska’s Kenai Peninsula. When she’s not calling out to passing ravens or making a cup of tea, she’s writing dark and moving stories.

For those who’ve never experienced the disorientation of Spring Forward…I dislike you, greatly.

See, in the US we decide to “jump” the clocks forward by an hour every Spring and the body clock takes about a week to fully adjust to the dark mornings and odd eating times. [Just one more reason to despise Ben Franklin, LOL.] Truly, today I’ll eat lunch at probably 10 am and dinner at 8pm because my stomach can’t figure out what the heck the solar visual cues mean. Don’t think I’m the only kook out there; today is notoriously bad for traffic accidents with sleepy drivers causing more morning crashes…

With my body being so out-of-kilter I thought I’d feature a book I recently read by a dear writing friend, Susan Kaye Quinn. Not that it’s odd for me to recommend her work–but I don’t usually review Middle Grade books. I read them, of course–I have an 11 year old child–yet, the story’s sense of being out of both place and time fit beautifully with my Spring Forward disorientation. 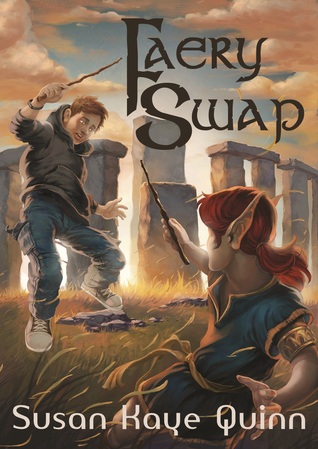 THE FAERY SWAP features two young(ish) boys–Finn, a human, and Zaneyr, a faery–who trade souls on the summer solstice in Amesbury, England–a stone’s throw from, you guessed it, Stone Henge.

Finn’s whole life is devoted to keeping his sister, Erin, safe and out of foster care. See, they aren’t orphans but their mom died a few years ago and their dad, a mathematics professor, is parentally MIA. On the way to school one morning, Finn is tricked into helping a strange boy with the smallest of tasks–picking up a dropped coin–and plummets into a realm of magic and fantasy the likes he never could have imagined.

Zaneyr is determined to thwart his father, King Dageyr, from sealing the Rift–the magical space erected between the human and faery world 4000 years ago. In this breach of space-time, Zaneyr’s mother was lost, locked into the mortal human world, while those in the faery Otherworld lived on, never aging. Each summer solstice, emissaries of the faery world are sent to Earth to learn of any advancements in math or science that might lead humans to Otherworld. Due to the time distortions of the Rift, a year in Otherworld equals a century of Earth years, so the advancements move quickly, compared to Otherworld time.

Knowing that sealing the Rift will lead to many mortal lives lost, Zaneyr risks shifting with Finn–even if it means sending Finn’s soul to Otherworld forever. One life must be worth more than the thousands that will be lost if King Dageyr’s plan is complete, right?

Of course, Finn is unwilling to go without a fight. He is assisted in his effort to return to the human realm by a rock sprite named Pyx and Zaneyr’s BFF Liranna, a tough faery who harbors a crush on the impetuous prince. They have less than a day to reverse the swap–by sunset on the solstice the realms will be too far apart for souls to return to their previous realms–so it’s handy that Finn develops some magical skills while trudging through the Otherworld.

Just when Zaneyr is getting settled in Finn’s life, the unimaginable happens–he meets a fellow faery, one who is desperate to return to Otherworld. And, of course, Finn manages to weave a bit of magic that interfere with Zaneyr’s changeling plan.

In the end, it is guidance from Finn’s genius father that stops the realms from merging.

This book is a real treat. Complete, interesting plot arcs call into question some very serious moral issues in a subtle way. For example, is it okay to sacrifice some to save many? And, what is the value of life? Most compelling for me was: is it fair to risk the happiness of everyone to fix an act long regretted?

Most importantly, it is the teen characters who save the day–thwarting the mis-guided plots of King Dageyr to correct past mistakes. The HEA occurs two-fold, with both Zaneyr and Finn having a better place in their realms when the sun finally sets. It’s written with boys in mind–but I believe girls and fantasy lovers of both sexes will enjoy this wholesome tale.

Interested? You can find THE FAERY SWAP on Goodreads, Amazon, or Barnes & Noble.

She’s the author of the bestselling young adult SF Mindjack Trilogy. The Dharian Affairs trilogy is her excuse to dress up in corsets and fight with swords. She also has a dark-and-gritty SF serial for ages 17+ called The Debt Collector and a middle grade fantasy called Faery Swap.

Susan grew up in California, got a bunch of engineering degrees (B.S. Aerospace Engineering, M.S. Mechanical Engineering, Ph.D. in Environmental Engineering) and worked everywhere from NASA to NCAR (National Center for Atmospheric Research). She designed aircraft engines, studied global warming, and held elected office (as a school board member). Now that she writes novels, her business card says “Author and Rocket Scientist,” but she mostly sits around in her pajamas in awe that she gets paid to make stuff up.

All her engineering skills come in handy when dreaming up dangerous mindpowers, future dystopic worlds, and slightly plausible steampunk inventions. For her stories, of course. Just ignore that stuff in the basement.

Susan writes from the Chicago suburbs with her three boys, two cats, and one husband. Which, it turns out, is exactly as much as she can handle. You can find her on Facebook way too often. Or you can reach her the old-fashioned way: susankayequinn (at) comcast (dot) net


She’s a dynamic speaker and really inspires people, as you may agree! If you are, or know, a teacher or a librarian, get in touch with Susan about getting in class projects and swag to foster the growth of young minds in both science and writing!

Best of luck, and keep reading my friends!