Hi there! Today I’m getting the word out about a new cowboy M/M Romance from Mae Hancock. COTTON CANDY is a contemporary romance that features a love interest who struggles with OCD–Obsessive Compulsive Disorder. It’s bound to bring a new perspective to the love story.

Don’t forget to scroll down and enter the giveaway! 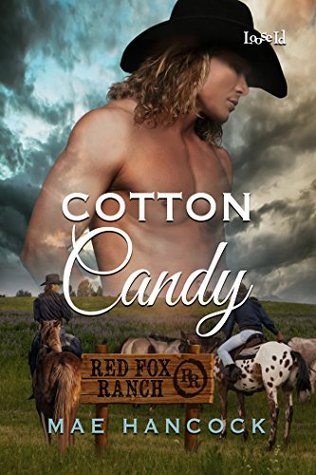 About the book:
Cowboy Cotton Reid is the laid-back type of guy who accepts people as they are, no matter how flawed. People think he’s fun, honest and crazy about his boss and friend the sexy rancher Bay Redman.

Living with Obsessive Compulsive Disorder (OCD) is something that family man Bay has done his whole life. Bay can be like a bear with a sore head if the hay isn’t stored symmetrically or his fridge contains an odd number of jars.

When the two men begin a hot affair, Cotton keeps an important secret from Bay. If he can’t find the courage to tell him the truth before someone else does, Bay may never be able to let it go.

The heat of the spring sunshine made the air thick and heavy like midsummer as Cotton and Bay rode back toward the ranch after a long day rounding up cattle for market. A faint breeze caught strands of Cotton’s hair, blowing it into his face beneath the tan Stetson. He lifted the hat off and ran his fingers through his damp mop of hair. Then, pulling a band from his wrist, he secured the locks into a familiar small bunch, leaving a fingerbreadth of tail hair at the nape of his neck.

Glad for the momentary relief from the heat, he placed the hat back on and took in Bay’s broad shoulders as he rode in front. For some reason today, Cotton had not been able to break away from studying each movement Bay made. Twice before, Cotton had stared at the man too long and noticed Bay’s brown eyes searching his own. Has he noticed me watching him? The man’s deep, smoky cedar scent carried to Cotton on the wind, the smell so rich and bountiful it made his senses stir with desire.

Starting to get darn near obsessed with the man who doesn’t even notice me—not in a carnal way anyhow.

Bay and he were boss and hired help. Bay didn’t chase, pursue, desire—or even demand anything of Cotton, which served to make the man more attractive. Bay’s sensual, deep-brown eyes tugged at Cotton with each glance, and Bay’s thick lashes fanned out, flattering his dark-bronze skin. A simple, meaningless smile had far-reaching and significant implications for Cotton. Put simply, it meant Bay approved of him and the things he did. The rancher’s soft, full lips framed milk-white teeth, and sent urgent ripples right through Cotton’s body, leaving his fingertips tingling and the reins slippery with his sweat.

Notes from the Author:

I’ve already touched on the topic of Obsessive Compulsive Disorder (OCD) before in a blog when Enticing Hart was released. It only seems fitting to do a small blog on OCD from the perspective of Bay in Cotton Candy. This second story in the Wyoming Lovers series depicts the relationship between cowboy, Cotton Reid and rancher, Bay Redman.

I realized early on I’d given myself a tall order by combining an alpha male with OCD, nevertheless OCD can often be a sign of an individual with a lot of anxieties and hang ups which are locked away deep in the psyche. I guess we often think that these troubles are the antithesis of what we deem to be the dominant male. However, these people are often highly dominant because they have obsessive/control tendencies and these manifest in different ways. In Bay’s case his angst over personal tragedies are channeled into the control and symmetry surrounding everyday/inanimate objects.

OCD affects thousands of people’s lives everyday, often causing misery but often it comes with a high degree of professional success and is also seen in many people with extremely high IQ’s. These idiosyncrasies can often help a person achieve goals, which are unimaginable to many of us.

In the long term, whether Bay will be able to overcome the differences caused by his OCD, remains to be seen. The first step though has been making the essential move to acknowledge the problem and ask for help with the support of his lover and family. In many cases people with OCD go through their whole lives without being able to change it. Perhaps we will find out what happens to Bay in the next story of the series of Wyoming Lovers, Sayers Way.

Make sure to follow the whole tour—the more posts you visit throughout, the more chances you’ll get to enter the giveaway.
Click on the Rafflecopter link below for your chance to win a $10 Amazon gift card
a Rafflecopter giveaway