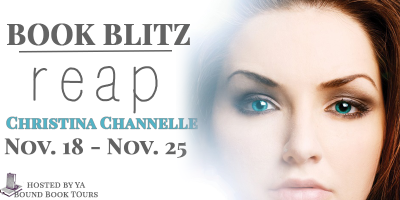 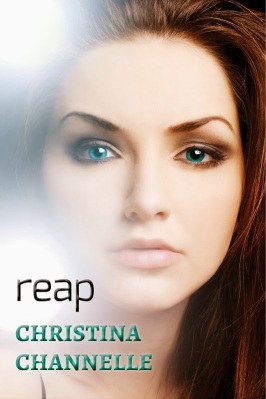 Reap (YA Paranormal Romance Novella)
by Christina Channelle
Now Available!
Summary from Goodreads:
Foreign, or rather unfamiliar, would be the word I would use to describe how I felt.Faintly, I could hear the glimmer of voices surrounding me in this dark haze, caressing my ears like skin against silk. I felt like I was in a cocoon of sorts, protectively enveloped, quietly drifting in some far-off place. I wanted to stay that way forever.But we all know that what you want never really seems to happen in the real world.
Something’s not right in Mia’s head.

The first thing is that her name isn’t Mia. In fact, she has no clue what her name is—who she is. All that she knows is that she’s not like the ones who found her: Dante with his kind blue eyes, Amy with her child-like demeanor, James with his questioning gaze.

The one she cannot decipher no matter how hard she tries.

As Mia tries to fit in with these people, a strange occurrence is amidst outside. And as she finally remembers who she is …

How about a tease? 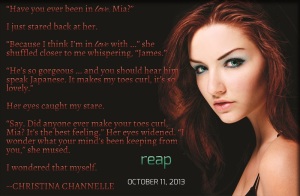 I opened my eyes but had to squeeze them shut against the harsh lights. My lids felt swollen, heavy with fatigue. My eyes burned, tears leaking from their corners.
It was the most uncomfortable of feelings.
I must have been dreaming.
“Hello?”
Although the word seemed alien to me, almost as if I had never heard it before, I instantly understood its meaning. The voice that had spoken was warm, making me feel as if I were suddenly sitting in front of a fireplace, wrapped in a heavy blanket, flames crackling. The heat of the word practically licked my skin.
Again, I tried opening my eyes, this time a bit more cautiously. Blinking, I slowly adjusted to the artificial lights, now able to see.
I found myself staring back into a pair of bright blue eyes, a look of wariness in their depths. For a brief moment I couldn’t look away as I stared up at him. Then he cleared his throat and glanced away, as if uncomfortable with my gaze. With the spell of his eyes broken, it was then that I noticed I was lying on the ground—no, on hardwood floor.
And with not one, but three interested faces peering down at me.
I sat up, then winced at the abruptness of my movement, bringing my hand to the back of my head.
Pain, my mind whispered.
“Careful now.”
I directed my eyes toward the person who had spoken such kind words. It was the first person I had noticed, the one with the blue eyes and the warm voice. His voice was deep and calming, and as I sat there I tried to think of the emotion I should be experiencing. Inhaling softly, I closed my eyes, ignored the painful throb in my head, and waited for the proper term to flutter into my mind.
Gratitude.
“Where did you come from?”
Satisfied I had found the correct word, I opened my eyes again to the voice speaking to me. It was a pleasant voice, reassuring to say the least, and immediately captured my attention.
At that moment, I didn’t notice the black hair atop his head, a striking contrast against his blue eyes that looked like I was staring into an ocean. I didn’t notice that the corners of his eyes crinkled up when he smiled kindly at me, complementing the single dimple in his right cheek. By just looking at him, anyone could tell that he was someone who knew how to laugh. But I didn’t notice any of that.
All those things I would notice later.

A dreamer, Christina Channelle holds two degrees in health sciences but has always had a passion for writing. You will find her reading other young adult novels, or typing up a new story on her computer. When not writing, Christina spends her free time at the movies, listening to music, or eating sushi. She’s a reality TV junkie and has a close relationship with many characters on TV that have been a topic of many heated discussions among friends. She resides in Ontario, Canada.

Her newest project is the YA Paranormal Romance, REAP, was released October 11, 2013.