Hi there! I’m so excited to share a review and giveaway for a contemporary M/M sports romance from Avon Gale. As you know I adored her hockey playing hunks in SAVE OF THE GAME and POWER PLAY so I went and picked up the first book in the series, BREAKAWAY. The fourth book, EMPTY NET, just released yesterday, and I’m nearly finished with it, as well. So, so good! I’m not even a hockey fan, and I adore these stories! 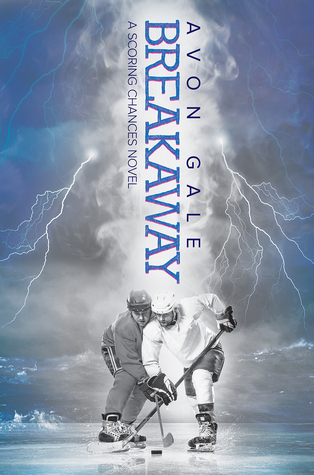 About the book:
Drafted to play for the Jacksonville Sea Storm, an NHL affiliate, twenty-year-old Lane Courtnall’s future looks bright, apart from the awkwardness he feels as a gay man playing on a minor league hockey team. He’s put his foot in his mouth a few times and alienated his teammates. Then, during a rivalry game, Lane throws off his gloves against Jared Shore, enforcer for the Savannah Renegades. It’s a strange way to begin a relationship.

Jared’s been playing minor league hockey for most of his career. He’s bisexual and doesn’t care if anyone knows. But he’s determined to avoid another love affair after the last one left him devastated. Out of nowhere a one-nighter with rookie Lane Courtnall gives him second thoughts. Lane reminds Jared why he loves the game and why love might be worth the risk. In turn, Jared hopes to show Lane how to be comfortable with himself on and off the ice. But they’re at different points in their careers, and both men will have to decide what they value most.

My Review:
Lane is a young closeted gay man who’s on his own for the first time in his live. He’s moved from Canada to Jacksonville, Florida to play for the Sea Storm, a minor league hockey team in a place where people hardly understand the concept of ice. It’s a total culture shock, but Lane’s generally flummoxed. He’s got no filter, and is awkward to the point of /facepalm + Oh man!. He can’t help pissing off everyone in his vicinity with his unconscious lack of tact. In a last ditch attempt to win some favor, Lane, a superlative forward and primo scorer takes on the goon for a rival team, Jared Shore.

Jared isn’t sure what to make of young, virile, talented Lane. But he doesn’t kick the man out of bed. To be the only man that Lane’s ever been with? Seems like an empty net opportunity, but he’s also got to learn to tune out Lane’s odd chatter, at times. Lane’s ashamed of being gay, afraid that his parents will disown him–something he really struggles with even though he’s supporting himself now. Jared helps him to see that being an adult means coming clean with his fears and insecurities, and that helps Lane grow as a man and a player. It’s all good preparation for Lane when he gets The Call bringing him up to the big time, a few games in the NHL. Jared’s an amazing support and together they are able to deal with Lanes parents. I have to admit that was so much sweeter than I had expected. Poor Lane, he tortured himself for so long, and for no reason! I loved Lane, even when I wanted to smack him. He did crack me up with his completely outrageous conversations.

This is a very tender read, considering the guys are grown adult hockey players. I loved how the romance built a little at a time, as Lane and Jared are players on different teams and have lots of forced separations due to schedules. It made their brief trysts so much sweeter, and that was really fun to experience. Also fun? Lane and his new sexual experiences! I do love me a virgin, from time to time. I’m not a hockey fan at all, but this one put me in a smiling frame-of-mind and gave me warm feels despite all that ice.

Interested? You can find BREAKAWAY on Goodreads, and for a single DOLLAR on Dreamspinner Press through 9/4. Regularly priced on Amazon, Barnes & Noble and AllRomance.

SAVE OF THE GAME (Scoring Chances #2) is also on sale. Catch my review here, and pick it up for $2 on Dreamspinner Press.

POWER PLAY (Scoring Chances #3) is ALSO on sale. Catch my review here, and pick it up for $3 on Dreamspinner Press.

About the author:
Avon Gale was once the mayor on Foursquare of Jazzercise and Lollicup, which should tell you all you need to know about her as a person. She likes road trips, rock concerts, drinking Kentucky bourbon and yelling at hockey. She’s a displaced southerner living in a liberal midwestern college town, and when she’s not writing you can find her at the salon, making her clients look and feel fabulous. She never gets tired of people and their stories — either real or the ones she makes up in her head.