Hi there and welcome to the MR. 365 Blog Tour sponsored by AToMR Book Tours. For other stops on the tour click here. Today’s book is a contemporary adult romance from Ruth Clampett–author of a personal fave:  ANIMATE ME.

Book description
When reality show producer Sophia is assigned to convince Christmas fanatic Will to be on their holiday special, she imagines him to be an oddball momma’s boy wearing a reindeer Christmas sweater. What she doesn’t expect is the handsome, mysterious man who captures her attention, and seems determined to win her heart.

Their attraction is undeniable, and as charming Sophia convinces Will to work with her, she slowly unwraps the secrets in his past that make this determined and soulful man still yearn for the childhood he never had.

When the chaos of production starts, will Sophia be able to keep her promises to protect Will from being exploited, or will the bitter truth of reality television be a runaway train of disaster for both of them?

Join Sophia, Will and his dog Romeo to enter the world of his enchanting holiday house where stars shine indoors and snow is always falling…365 days of the year.

Will is a man’s man. He’s big, burly and…decorates his house like it’s Christmas everyday. Of course, he ramps it up for the holidays–much to his neighbors’ chagrin–but his mission is to simply give back. He had a lousy childhood, spent time in juvie and on the streets, but he made it out. Grew up and realized his good fortune is a blessing he should spread around.

Sophia is a film producer new to ‘reality’ TV. Her first big show is to showcase Will and his “Christmas obsession” but she recognizes the emotional frailty that resides within Will and wants to show him in a favorable light–in fact she promises to. He never wanted to do the show and only agrees when Sophia tells him how a positive piece–highlighting Will’s charity work, might ease the heat he gets from his neighbors over his lawn decorations.

And then they fall in love. Sigh. Okay, okay–it’s deep, deep like anyway. It’s adorable how they try to keep their attraction on the down-low, what with the production staff (female and male) swooning over Will! They do try to maintain a professional attitude in front of others. Mostly.

Then the shoot wraps and Will and Sophia are finally able to indulge in their passion for each other. Briefly. Add one Insane Neighbor Vendetta and you got yourselves an old-fashioned front yard brawl, complete with serious injuries, fire department call-outs, and overnight jail stays.

Sophia heads on to her next assignment and the powers that be, well, let’s say their “creative” take on Will’s Christmas house would earn them coal-filled stockings…It’s not going to win over Will’s neighbors, in any case. Sophia can’t bear the part she played in Will’s show–and their budding relationship…well…

*stage whisper* IT’S A ROMANCE, SILLIES! SOMEHOW IT ALL WORKS OUT!

Yes, HEA indeed. And it’s a great ride. The steam is subtle, and the tension is high, and I’d love me a little bit of Mr. 365–if Ms. Clampett has any to spare. Fact is, I love Ruth Clampett’s characters. Will is damaged goods, but achingly vulnerable and entirely loveable. Sophia is career-minded and driven, but she takes time to listen and learn. The book will surely appeal to contemporary romance fans.

Ruth Clampett, daughter of legendary animation director, Bob Clampett, has spent a lifetime surrounded by art and animation. A graduate of Art Center College of Design, her careers have included graphic design, photography, VP of Design for WB Stores and teaching photography at UCLA. She now runs her own studio as the fine art publisher for Warner Bros. where she’s had the opportunity to know and work with many of the greatest artists in the world of animation and comics.

Mr. 365 is Ruth’s second novel and is inspired by her varied experiences in the television world from winning big on a game show, to guest hosting on the QVC shopping network, to sharing a studio with a production team that produced early reality television. Her first novel, Animate Me, is a contemporary romance set in the animation world. (Can I mention again how much I loved ANIMATE ME? Because–I so did! V:) ) She lives in Los Angeles and is heavily supervised by her teenage daughter, lovingly referred to as Snarky, who helps her plan and execute their yearly Christmas extravaganza.

One Grand prize consisting of:

Also up for grabs:

Good luck, and as always: Keep reading, my friends! 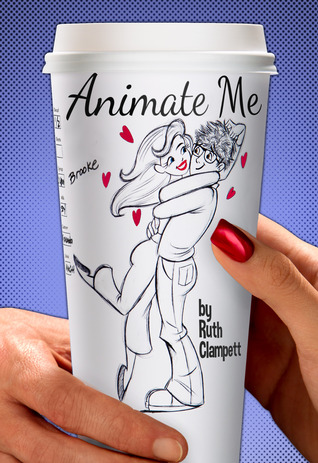 Hi there!  Wanted to share something fun I picked up as an Amazon Freebie a couple weeks ago. This fun New Adult romance by Ruth Clampett is everything I look for in a book–solid love story, some realistic complications, and a resolution that leaves me swoony.

ANIMATE ME does it animal-style. (more on that below!)

Twenty-four year old animator Nathan Evans has the biggest crush on Brooke, an executive at his studio. Not only does he admire her from afar, he names is comic book character B-Girl after her.

One day their paths cross in the elevator and there’s some banter about Brooke wanting a coffee. As Nathan was on his way out for coffee anyway he buys one for Brooke, too. Being the shy-romantic he is, he draws her a tiny cartoon on the paper cup. Something to make her flash that megawatt smile he adores.

They chat a bit and he’s so into it he decides to repeat this encounter the next day. And the next. Soon it becomes an afternoon ritual they both enjoy. It’s a giant leap for Nathan–he’s a bit (deliciously) socially awkward–to reach out to a woman. See Nathan’s only had two “relationships” in his life and neither was actually consummated…that’s right. Nathan’s a 24 y/o virgin.

I love how Clampett turns the innocence tables here–having Nathan be the fumbling novice and Brooke the savvy instructor! Genius!

In fact, Brooke thinks their flirtation is designed to attract another co-worker Nathan desires. Too shy to correct her–and wanting more than anything to spend more time with Brooke–he proceeds with Brooke’s Love Lessons all the while getting more action than he’d ever dreamed. Not that it’s all roses. Cause it ain’t.

Brooke’s pseudo-boyfriend, Arnauld, is the president of their animation studio. And when he learns that Brooke is falling hard for Nathan, Arnauld’s not willing to let her go. His attempt to destroy Nathan’s career is vicious and yet perfectly believable.

Through the flame war that erupts, Nathan and Brooke get separated. The longing, anguish and anger that Nathan experiences are so poignant–I wanted to jump into the book and hug him. Tell him, “Hold on baby, it’ll all work out!”

And it does, so HEA’s for everyone.

ANIMATE ME is a home run for me. I loved the male viewpoint! I loved Nathan’s innocence and excitement and steadfastness. He’s the kind of guy I hope my sons grow into–the kind that look for a special girl to cherish and then pour their whole soul into loving her. And, bonus, we get cute little cartoons that build on the love story!

Here’s where you can find ANIMATE ME:   Goodreads   AMAZON

New books are coming out from Ruth Clampett and they sound just as fun.  I’ll keep you posted when I get my eyes on them…

Let me know if you pick up ANIMATE ME and drop me a comment on how you liked it.