Hi there! Today I’m spotlighting a time travel romance from Aleigha Siron. FINDING MY HIGHLANDER puts a savvy, contemporary woman deep into Scotland’s history, at a time when she’d be lucky not to be burned for a witch!

Catch an exclusive insight from Ms. Siron, my review and enter to win a $20 GC below! 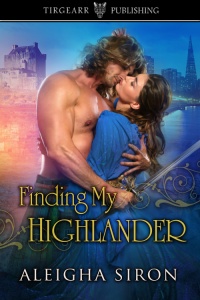 About the book:
On a windswept cliff above San Francisco Bay in 2013, 27 year-old Andra Cameron, the last member of her family, prepares to scatter her family’s ashes to the wind. An earthquake catapults her to the Scottish Highlands in 1705. She wakes, aching and bloody, to the sound of horses thundering through the trees. Terrified and with no other options, Andra accompanies these rugged warriors. She can’t deny the undeniable attraction that ignites between herself and the handsome but gruff Kendrick. Will she trust him to provide protection in the harsh reality of 18th century Scotland and with her secret, or will she find a way to return home to the 21st century?

Laird Kendrick MacLean and his men, escaping a recent skirmish with their worst nemeses, clan Cameron and their Sassenach allies, are shocked to find an injured, unprotected female in their path. How could she not know her kin and how had she landed in the middle of the wilderness alone? His men suspect she’s a spy or a witch. Still, Kendrick will not abandon an injured woman, even if she speaks unusually accented English, and her name is Cameron. Will he ransom her to others or will their closed hearts open to each other? Although he questions her every utterance, this feisty, outspoken woman inflames his desire like no other.

A bit of the book…

Andra leaned her head against the cool, damp stone. This can’t be happening. It isn’t real. But the odor of sweaty horses and men and the coppery tang of blood certainly smelled real. The hard-muscled mass that had kept her from toppling off his horse certainly felt real. More real than anything she had felt for months, perhaps years, but her mind couldn’t connect this experience to a meaningful reality.

As Kendrick walked to the back of the cave, she closed her eyes and slid to the floor. The past few hours would not congeal into anything that made sense. “Well, Dad,” she groaned, “either I’m suffering delusions and the wildest hallucinations, or I am in Scotland, but I know not when, where, or how.” For a moment, she swore she could hear his laughter, scolding her to buck up Andra, and go with the flow. It was one of his favorite admonishments, always delivered with a chuckle.

Battered, bruised in body and mind, Andra questioned her tumble through…what? Space, time? Impossible! But perhaps not, how else could she explain her present circumstances? Her shoulders and back ached from the extreme effort it had taken to hold her body stiff and separate from Kendrick’s during their frantic charge through the night. Yet she still felt the thrill of desire that had infused her when she finally relented to the grip of those strong arms and sagged against his hard chest. What was that about?

At this stop on my blog tour, I’ll start with a brief introduction about time travel.
From Newton’s straight arrow theory, to Einstein’s gravitational theory that states time is like a flowing river, thus only forward motion in time is possible, captivates us. However, what would happen if an earthquake or some other anomaly caused that river of time to momentarily flow in reverse or open a time warp? This is the theory for my book Finding My Highlander.

These early explorations through modern day attempts to combine quantum theory and gravity, to wormholes, to theoretical physicists’ superstring theory and the “theory of everything,” continue to energize both science and imagination.

What if the multiple universe idea is the key and everything that could exist is happening in some other dimension simultaneously. Now that concept scrambles the brain, but it has been used as the basis for a number of books and movies.

Thanks to theoretical physicists’ research, even Steven Hawking has recently changed his position from time travel being impossible to one of possibility but not practicality.

Sometimes I feel like I’m not really of this era, as though I belong somewhere far in the past when life moved at a slower pace. If I did go back in time, I’d want to remember what I’ve learned on this journey through life so that I might do it all again with the wisdom of age, and the spirit and fire of youth.

However, please send me back with plenty of money because I don’t want to be poor in the “good ole’ days,” when you toiled long and life was short.

My fascination with this subject presents untold opportunities to explore foreign realms and eras on the page while enjoying present day comforts, like indoor plumbing, speed of transportation, and yes, even computer technology, though that is also my constant nemesis.

It turns out Benjamin Buttons was right after all, everything is backwards.

Ha! That’s a fun way to think about it.

Andra Cameron is a contemporary woman living in San Franscisco. Her parents, Scots through-and-through, have both died, as has Andra’s newborn child. Honoring her father’s dying wish that his and her mother’s ashes be returned to Scotland, Andra plans the journey. But, before she boards the plane, she releases some of the ashes in California. It seems an earthquake strikes, but the next Andra can tell, she’s waking with a concussion in a highland forest.

Captured by the big and burly Laird Kendrick MacLean, Andra must hide who she is, or risk being slain for a witch. Kendrick’s men are highly suspicious of the Sassenach (foreigner, which Andra clearly is) and only allow her to help tend a mortally wounded man–Kendrick’s brother Lorne–when she demonstrates that the pills she gives him are not toxic to herself. They remain in very close quarters for a week, during which time Andra cannot explain her history or presence in their midst. She rescues two children, the only survivors of a Cameron clan-led massacre, and the war party is moved by her gentleness with the children.

The more time they spend together, the more Kendrick is attracted–despite his vow to never love again. He’s had a hard adulthood. Thrust into power when his father took ill, and losing his wife and firstborn child in labor, Kendrick has sworn to protect his people at all cost, and forsake any thought of love again. That said, Andra’s brash and confusing manner has caught his attention and interest. If only he could get to the heart of her secrets! He wants to believe she isn’t a threat, but the Camerons and Sassenach English keep chipping away at the borderlands. Is she in league with them as a spy? Can he afford to fall for her when his duty is to marry well and save his clan?

If you like time-travel or Highlander romance you’ll be thrilled with this new story in the genre. Andra is a kind and compassionate woman, and Kendrick is a stalwart man. They experience a mutual and thrilling attraction, with Andra initiating some loving after witnessing a tragic event. Kendrick is cautious, and intrigued, by the spitfire who claims she was raised abroad. When Andra falls ill, Kendrick and Lorne learn some of Andra’s secrets–and how to open a bottle of Advil!

Despite the danger, their attraction builds into a true affection, and more. If only they could trust each other fully. Though, when the clan MacLean is drawn into battle to save Kendrick’s sister and Andra, his reaction to her grave injuries makes it all too apparent that the need for answers regarding Andra’s history is a moot point in the face of Kendrick’s love for her. Plus, men want to marry Andra, and Kendrick cannot bear the thought.

I really liked the struggle that Kendrick battles to change his mind and heart over his unmarried state. And, his unwillingness to lose Andra, even when he learns all her secrets. Andra’s a fighter, in more ways than one, and truly earns the respect of Clan MacLean, and the heart of her own Highland laird.

Interested? You can find FINDING MY HIGHLANDER on Goodreads, Tirgearr Publishing, Amazon (US and UK) Barnes & Noble, iBooks, Smashwords, and Kobo.

Click on this Rafflecopter giveaway link for your chance to win a $20 Amazon gift card. Check out other stops on the tour to increase your chances!
Good Luck and keep reading my friends!

About the Author:
After more than twenty years writing and delivering management and other training programs for modest-sized to Fortune Five Hundred companies, and ten years developing community crisis-intervention training programs, Aleigha turned her writing efforts to her first loves, fiction, and poetry. Her poetry has appeared in numerous anthologies and university presses over the past few decades. Following a difficult period in her life, she discovered solace in romance novels that inspired her to write in this genre. As she says, “who doesn’t desire a guaranteed happy-ever-after scenario?” Always interested in the concept of time-travel, she knew her first few stories would follow that theme.

When not writing, her trusty four-legged companion/helper, Strider, accompanies her on sunset walks along the shore. During these quiet walks under an expansive sky, with the whoosh of waves across the sand and her gaze drifting over the rolling sea, her best glimmers of inspiration come to mind. Following the recent discovery of distant Scottish ancestors, she embarked on a trip to the Highlands. Although she had already developed the characters for Finding My Highlander, her trip to the Highlands enriched the characters and enhanced the story direction. This is her first full-length romance novel. Aleigha is working on a prequel to Finding My Highlander, and another time-travel novel set in a later period.