Hi there! Today I’m featuring a review of a newly revamped, re-released historical M/M romance from best-selling author Abigail Roux. ACCORDING TO HOYLE is an interesting, well-paced, adventure following the travels and travails of two pairs of lovers in 1880’s western US. There is a complicated plot, and few romantic interludes in the closing chapters. It felt an awful-lot like Maverick–only gay. 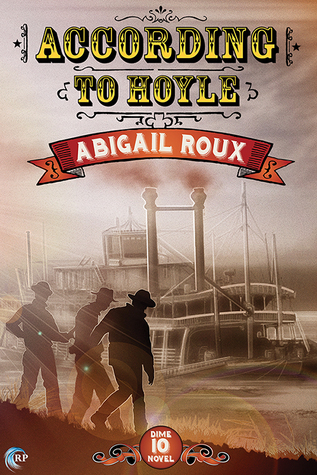 About the book:
By the close of 1882, the inhabitants of the American West had earned their reputation as untamed and dangerous. The line between heroes and villains is narrow and indistinct. The concept that a man may only kill if backed into a corner is antiquated. Lives are worth less than horses. Treasures are worth killing for. And the law is written in the blood of those who came before. The only men staving off total chaos are the few who take the letter of the law at its word and risk their lives to uphold it. But in the West, the rules aren’t always played according to Hoyle.

U.S. Marshals Eli Flynn and William Henry Washington are escorting two prisoners to New Orleans for trial when they discover there’s more to the infamous shootist Dusty Rose and the enigmatic man known only as Cage than merely being outlaws. When forces beyond the marshals’ control converge on the paddlewheeler they have hired to take them downriver, they must choose between two dangers: playing by the rules at any cost or trusting the very men they are meant to bring to justice.

My Review:
4.5 stars. It seems, in the West, everybody’s got a secret (or six) to hide. Gabriel “Dusty” Rose is a well-known English gunman living out his exile in the western states in company of any of many Native American tribes. He’s hunted out for use by the Secret Service for information about a Native artifact he may (or may not) have, but he doesn’t wish to cooperate and is subsequently jailed for trial–it seems folks are always attacking Gabriel, hoping to be faster on the draw than the legendary killer. Gabriel and two other inmates Cage and Hobson are picked up for transit by two US Marshals–Eli Flynn and “Wash” Washington.

Flynn and Wash are solid lawmen. They believe in trials and punishment, though Wash is clearly not convinced that the law is always ‘right’. These men have been friends for many years, even since the War Between the States, and enjoy each other’s company. Flynn has a deeper affection for Wash than he will acknowledge, however Gabriel–a consummate judge of character–clearly notices. Not that Gabriel cares–he prefers men and doesn’t hesitate to make this plain.

Interestingly, the BULK of the story is told from the POV of Cage, a mute prisoner who has deep secrets and is likely to be hanged for burning diseased Army blankets, and Flynn, who cannot fathom the open affection he witnesses between Gabriel and Cage.

The transport of the prisoners is delayed by weather, fighting, and difficult terrain. Just when it seems Cage and Gabriel will be separated, losing the one true connection either of them had mustered in some time, there’s a switch, and the foursome of Flynn, Wash, Gabriel and Cage end up going downriver on a paddle boat bent for trouble. When it is seized by river thieves, Flynn must depend upon Gabriel, an uncommon killer, to help him save Wash–and all the rest of the passengers. (But, mostly Wash)

They four men build a tight comaraderie over the course of this book–and the resolution is clearly meant to build into a new adventure. Flynn’s constant exposure to Gabriel’s insightful, if unwelcome, commentary causes Flynn to investigate his feelings about Wash, and leads to the best connection of his life. Cage has terrible secrets, which come to light in captivity, but it’s Gabriel’s affection that wins out.

The book reads a lot like a Maverick/Indiana Jones plot, lots of foreshadowing, governmental intrigue, and double-crosses, with a dash of romance here and there. I did very much enjoy the ride, and I’d likely go back for more. I had wished for more steam, and to better understand this Native artifact, but it seems that will be reserved for the next story.

Interested? You can find ACCORDING TO HOYLE on Goodreads, Amazon, Barnes and Noble and Riptide Books. I received a review copy on NetGalley.

About the author:
Abigail Roux was born and raised in North Carolina. A past volleyball star who specializes in sarcasm and painful historical accuracy, she currently spends her time coaching high school volleyball and investigating the mysteries of single motherhood. Any spare time is spent living and dying with every Atlanta Braves and Carolina Panthers game of the year. Abigail has a daughter, Little Roux, who is the light of her life, a boxer, four rescued cats who play an ongoing live-action variation of ‘Call of Duty’ throughout the house, a certifiable extended family down the road, and a cast of thousands in her head.