Hi there! It’s Halloween and I thought I’d share a review for a set of paranormal romances I picked up recently. WILD is a three-book set from Eve Langlais, Kate Douglas and AC Arthur all have some yummy shifter romances to whet your whistle. 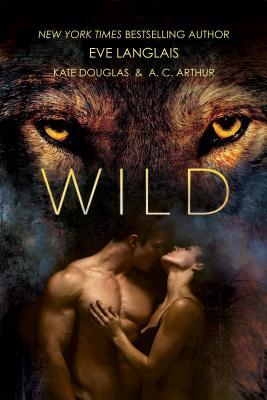 In Catch a Tiger by the Tail by Eve Langlais, Broderick has a job to do—audit the books of a gentleman’s club. Sounds simple, except his company wants him to find dirt linking to the mob, his secret mob employer wants someone to pin the blame on, and the bar manager at the heart of the controversy doesn’t want him—even though she’s his mate.

In Wild Passions by Kate Douglas, six women—friends closer than sisters—head off to an exclusive mountain resort for a week-long bachelorette getaway, where most of the women just wants to know if there are any good men left in the world. There are, and they’re the men of Feral Passions, a unique resort located on a private wolf preserve, owned and run by a pack of sexy werewolves who use it as their own personal hunting ground for mates.

In Her Perfect Mates by A.C. Arthur, Malec Zenta was part of a loving lycan family until his twin brother’s suicide took a piece of his soul. Channing Verdi never knew his parents, but that was fine because at the age of sixteen on the night of the full moon, he realized his purpose. The only pleasure these two betas have managed to find in their life was in the bed with the women they shared. Now, a human woman has entered their lives…a woman who sets their primal instincts on fire, a woman they can’t help but stake their claim on…and give her the ultimate pleasure of being with two shifters at once.

The books in this set are all separate works, and have no connection with one another. That said, CLAIMED BY THE MATE features FERAL PASSIONS–which precedes Wild Passions and THE ALPHA’S WOMAN which comes before Her Perfect Mates. I think they make more sense having read the previous books.

To sum up, all the books have male shifters and human females. Catch a Tiger features a M/F romance between a tiger shifter who lives two lives–smart accountant and mob guy. Wild Passions has wolf shifters in search of their mates–mostly this is M/F but there is all a FMM menage. Her Perfect Mates is a MFM menage.

In Catch a Tiger by the Tail by Eve Langlais, Brody finds his mate while investigating a suspected grift at one of his mafia boss’ adult cabaret. Lulu was a waitress at Tail Waggers until her manager disappeared and she got “promoted.” Now, Lycan leader of the city Fabian Geroux thinks somebody’s on the take–and his sights are on Lulu. Brody’s, a lone tiger shifter, in a tight spot trying to prove the sexy redheaded human isn’t scamming Fabian, because falling for a human is bad–falling for one Fabian wants dead is way, way worse.

In the way of things, it turns out Lulu isn’t who they suspect her to be, but her secrets aren’t necessarily the worst. Nope, the worst is the homicidal maniac who plans to kill her in a quest for revenge against her father. Brody’s a wily cat and ends up saving her from big bad bears and keeping her safe from Fabian, too.

In Wild Passions by Kate Douglas, four women—friends closer than sisters—head off Feral Passions, a resort and “wolf preserve,” for a week-long bachelorette getaway. Werewolves and regular alike inhabit Feral Passions. In this world, all werewolves are male, and they can turn a female with whom they mate. There’s a whole pack of males wishing for mates.

Meg is having second thoughts about her upcoming marriage to Zach, a wealthy entrepreneur. She and Elle, Jules and Darian–best friends from childhood–are planning a sexy retreat and find the men of Feral Passions to be even hotter than the pictures on the website. Elle soon has two wolves in her bed, while Darian and Jules each pair up with a sexy man-beast. Meg, despite her cold feet, is befriended by Trak, the owner of the resort–and his companionship helps Meg to recognize that she’s an attractive woman very much worthy of Zach’s affection and love. Lots of sexytimes for Elle, Jules and Darian–and the men who please them. Gonna need a third book to pair off the rest of the pack, but so far everyone is totes cool with their mate-pairings.

In Her Perfect Mates by A.C. Arthur, Malec hates being a shifter–ever since his twin killed himself. Channing never knew his parents, but his adoptive family was very kind. These two met up with Blaez years ago and they all served in a special ops group in the Marines, alongside Phelan. Now they work and live together in a highly secured compound in the mountains. The previous book was the lovestory between Blaez and his mate Kira. There’s a big shifter war in their world, and they came from different factions. Blaez is a hunted shifter due to his pure werewolf lineage.

Malec meets new-to-town veterinarian Caroline when he brings her a mutilated buck to see if it can be saved. Malec suspects the buck was a message from Hunter shifters after Blaez–he didn’t suspect he’d find his mate at the office however. Malec’s not used to being intimate with women on his own–he always makes up the third leg of a menage, with charming Channing. Thing is, Channing’s also drawn to Caroline, and Caroline wants both men–except that would make her a slut, like her prostitute mother. The real and present danger forces them all close, and it seems like the only way to keep Caroline safe, from predation and gossips, is to bring her into the pack. Also, sexytimes.

In all, I liked WILD PASSIONS best, because it’s sweet and lots of sexy, but the other two are cool, and interesting in their own way. Each will have more stories to come–to resolve the major plot arcs that are still open, and also secure mates for the currently unpaired shifter males.

Interested? You can find WILD on Goodreads, Amazon and Barnes & Noble. I received a review copy via NetGalley.

Thanks for popping in, and Happy Halloween reading my friends!