Hi there! Today I’m sharing a review for a M/M paranormal New Adult romance from Mell Eight. MAGNIFIED is the first book in her new Magnified series. This book sets the stage for a Supernatural Coalition to help maintain the secrecy and safety of paranormal beings living in the Northeast US.

Scroll down for an excerpt, and to enter the giveaway for a $10 GC. 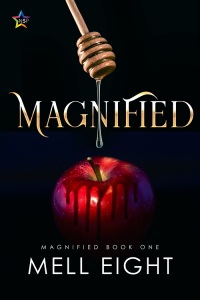 About the book:
On her deathbed, Yani’s great-grandmother reveals she has one last story from her past to tell: that of his great-uncle Yakov, who helped her survive the Nazis. It’s a story of vampires and werewolves he can scarcely believe—and in the wake of his great-grandmother’s death, Yani discovers the story is far from over.

The world of vampires and werewolves isn’t a safe place for a human, even one with Yani’s unusual family history. With danger at his door, the smart thing would be to run, but much like his great-grandmother, Yani has never been very good at running away—especially with his loved ones and the whole world at stake.

“Gramma, are you really dying?” Shira asked. She spoke around the thumb tucked in her mouth, but Great-grandma Chana still smiled down gently at the small three-year-old girl and her very chubby cheeks. Yani’s sister was such a baby, but she could say things that Yani didn’t dare. He was thirteen after all, and post-bar-mitzvah children knew better.

“I’m sorry to say that is finally true,” Gramma replied gently. The Eastern European accent she had never lost despite her many years living in the US, softened her consonants. Yani had heard her kind voice almost every day of his life, and it hurt to know that was about to end. “It is my time, as such a time comes to us all. God writes in his book, every Rosh Hashanah and Yom Kippur, who will live and who will die. Shira, this year I asked God to take me to him. I have been on this earth for long enough.”

Mom came over then and pulled Shira into a hug. Yani wished he were still young enough to get the same treatment. He could use a hug too. Gramma had been around for forever. She was nearly a hundred years old, although since her original birth certificate had been lost, no one was exactly certain of her precise birthdate. Instead, they celebrated on the day she had finally earned enough money to buy an actual house and move the entire family out of the city.

Gramma Chana was such a constant fixture in Yani’s life that he couldn’t imagine what it would be like with her gone. She had held him when he was born and had attended every birthday party and Passover Seder. In fact, just ten years ago, she’d still held Thanksgiving dinner at her house. Tzimmes for Thanksgiving was weird, according to Yani’s non-Jewish friends, but the sweet-potato-and-marshmallow dish was a staple for his stomach, and he couldn’t understand why no one else had it too. It was one of Gramma’s specialties.

Gramma had stood tall at his bar mitzvah just a few months back when she read an aliyah. Her hug after he read from the Torah while she stood next to him and watched with pride visible in every bone had been the strongest one of that day. In fact, Yani couldn’t think of a single important moment when Gramma hadn’t been there with a wide smile on her face.

But now she was lying in bed at a hospital, surrounded by her family. Grandpa Gideon was there, holding her hand while his younger brothers, Aharon and Shmuley, and their two much younger sisters and all their kids and grandkids hovered nearby. Great-uncle Shimon stood in the corner watching with tears in his eyes; Gramma had raised him too.

Mom was still holding Shira, standing next to Grandpa with her two older brothers. All of Yani’s many cousins were across the room. In fact, the room was packed with people.

Gramma sighed and smiled happily as she looked around the room. “Truly, I have been blessed. To have such a family. If only—” She paused on another sigh. “Yani.” She beckoned toward him. “I have a story to tell you. A very important story.”

Yani slowly walked closer to her bed, taking her wrinkled and scarred hand in his. She had worked hard when she first immigrated to America. Sixteen-hour days mending and sewing in a tiny basement apartment, trying to feed five people while learning to speak and read English and all of the new and strange American customs, had left their scars.

“I’ve already heard all of your important stories, Gramma,” Yani said gently, hoping to escape from one last telling of her days as cargo with four young children in tow aboard the steam ship that had brought her and her entire family across the Atlantic Ocean to America.

“Not this one, my dear,” Gramma Chana said with a very gentle smile. “This one I have not told you, but it is my most important story. It is the story I have kept close to my heart all these years; the story of survival and love in utmost adversity. In fact, everyone should listen and remember, Shimon especially,” she added in a louder voice to the rest of the room. “About my younger brother, Yakov.”

“Yakov? He stayed behind in Europe,” Grandpa Gideon said, but Gramma just continued to smile and began telling her tale.

My Review:
Yani is an American Jew descended from Polish Holocaust survivors. On her deathbed, Yani’s beloved great grandmother Chana shares a fantastical tale of how she and her brother Yakov and their four children escaped the Nazi death camps with the aid of a vampire, Martin. Yakov was enamored of the vamp and remained in Poland after the liberation, while Chana relocated to Boston with her three remaining sons, and Yakov’s infant son. They lived a good life in the US, but no one believes Chana’s story except Yani who is sure that he meets both Martin and Yakov at Chana’s funeral.

Fast forward many years and Yani is a college junior. He’s a devout Jew and plagued by his mom’s and auntie’s interest in his love life–hoping he’ll find a nice Jewish man to settle with. He’s never forgotten about his Uncle Yakov, since is seems he’s the only other gay member of their family, if he’s still alive that is. Yani’s most recent boyfriend was Luke who was not only not Jewish, he was a cheater. So, Yani’s a little reticent to meet another blind date arranged by the same friend who introduced him to Luke. Aaron is superficially Jewish, but there seems to be a spark. Unfortunately, all of this is ruined when Aaron’s father, who happens to be a mage and vampire hunter, kidnaps Yani and attempts to murder him. Because he greatly resembles an old photo of…Uncle Yakov that resides in the Hunter’s files.

This is obviously going to hamper a second date with Aaron.

It’s a heck of a caper, this story, which veers in directions I could not have anticipated. A LOT of folks that surround Yani happen to be paranormals. Not that he could have predicted this. Reaching out for help brings Uncle Martin and Uncle Yakov back to the States, to link up with the Northeast Supernatural Coalition. They want to ensure that Yani won’t be harmed, and he’s so overwhelmed with all the big reveals of his pals that he’s a little down for not being special like them. Aaron turns out to be a decent guy, and the connection grows as they face peril together.

As a first book in a series, I have to say I’m really intrigued about where it’s going. We’ve met incubi, vampires, werewolves, mages, trolls, demons and other paranormals in this book. Yani himself isn’t a paranormal, but he has Sight which affords him some advantages his cadre of companions do not have. And, he’s a fighter, deep down, so he does save his own life, plus those of his friends, in the course of this story. The immediate danger has been managed by the end, though there is a bigger threat awaiting Yani, Aaron, Luke, and Brandon–Yani’s roommate with supernatural abilities. Yani and Aaron are definitely connected, too, but it’s new and the sexytimes are still in the offing. I liked how that developed tentatively, as they are both in the midst of some pretty difficult stuff, so they recognize that romance will wait.

Triggers for brutal Holocaust memories and discussion, however mixed they are with the paranormal experience. My hubs’ German Jewish grandparents were work camp survivors and the story Chana spun of her family’s decimation was quite aligned to those of his family. It was just as gutting in fiction as it was hearing it first-hand. Yani’s modern experience as a Jew in a Christian country likewise mirrored some of my husband’s, so I was really connected to this book and character from the start. I want to thank the author for reflecting these experiences and sensibilities in a realistic and compassionate way. I eagerly await the next book!

Interested? You can find MAGNIFIED on Goodreads, NineStar Press, and Books2Read.

Click on this Rafflecopter giveaway link for your chance to win a $10 NineStar Press GC.
Good luck and keep reading my friends!

About the Author:
When Mell Eight was in high school, she discovered dragons. Beautiful, wondrous creatures that took her on epic adventures both to faraway lands and on journeys of the heart. Mell wanted to create dragons of her own, so she put pen to paper. Mell Eight is now known for her own soaring dragons, as well as for other wonderful characters dancing across the pages of her books. While she mostly writes paranormal or fantasy stories, she has been seen exploring the real world once or twice.