Hi there! Today I’m so excited to share a review and giveaway for a F/F contemporary romance from Brenda Murphy. LOCKSET is the second book in her University Square series and features a harried lawyer returning to her hometown to settle her father’s estate finding love with a local locksmith. I really enjoyed ON THE SQUARE, and we get a glimpse at some of those characters in this story.

Scroll down for an excerpt and to enter the giveaway! 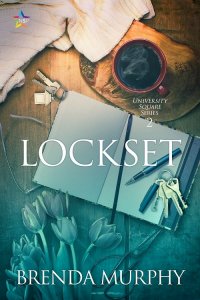 About the book:
After a string of failed relationships, brilliant litigator Eunice Park is determined to stay single. Who needs distractions when you’re trying to make partner at Chicago’s most prestigious law firm? A Sunday afternoon visit from the police is the beginning of a series of events that turn Eun’s life upside down, and she’s forced to return to her hometown and confront her estranged family.

Morgan Wright, locksmith and part-time animal shelter volunteer, is convinced the perfect woman exists, just not for her. After a chance encounter with Eun, Morgan becomes embroiled in Eun’s family drama.

Charmed by Morgan’s easy swagger, Eun invites her back to her hotel room. Bone-melting sex and a surprisingly soulful connection leaves Eun questioning her return to Chicago. But not everyone in Sikesville is happy Eun has returned.

After a string of failed relationships, brilliant litigator Eunice Park is determined to stay single. Who needs distractions when you’re trying to make partner at Chicago’s most prestigious law firm? A Sunday afternoon visit from the police is the beginning of a series of events that turn Eun’s life upside down, and she’s forced to return to her hometown and confront her estranged family.

Morgan Wright, locksmith and part-time animal shelter volunteer, is convinced the perfect woman exists, just not for her. After a chance encounter with Eun, Morgan becomes embroiled in Eun’s family drama.

Charmed by Morgan’s easy swagger, Eun invites her back to her hotel room. Bone-melting sex and a surprisingly soulful connection leaves Eun questioning her return to Chicago. But not everyone in Sikesville is happy Eun has returned.

Eunice Park glared at the ringing phone on her desk. On the third ring she picked it up. “What is it?”

“Sorry to bother you, Eunice, but your father’s on the line. He insisted I connect him.”

Eunice leaned forward and straightened her posture. “What?”

“Your father. Says it’s urgent. Want me to take a message? Or leave him on hold till he hangs up?”

Eunice swept her hair back with one hand and closed her fist around it, barely resisting the urge to tear it out. “No. I’ll talk to him.” She took her reading glasses off and tossed them on the top of the stack of trial transcripts and depositions on her desk.

“Eun?” James Park’s rich baritone filled her ear. Her Korean name, spoken in the way it was meant to be said, made her heart squeeze. She detested Eunice and still cursed the day she had chosen to use it instead of her true name.

Silence stretched out between them, harsh and violent. Eun settled back into her chair. Her father’s silence and its power over Eun had weakened over the years. Eun knew his trick. Wait for the other to become so uncomfortable they spilled their secrets and told you everything you wanted to know. For once, Eun would not give in. She set her gaze on the clock on her computer screen. One minute. Two minutes. Eun fiddled with the edge of her blotter.

At three and one-half minutes her father cleared his throat and spoke. “Come home. I need to see you.”

“Why now? I’m not coming home to be berated again. You made yourself clear five years ago. I’m not backing down. Not this time.”

“I’m not asking you to. I have something to discuss with you. I can’t do it over the phone. Please. This weekend?”

Eun rubbed her forehead. “I can’t. I’m buried. I have dog of a case, my cocounsel is an idiot, and I’ve got closing arguments next week. The weekend after?”

“What?” Eun’s voice rose as anger she had managed to contain bubbled up. “Oh hell no. You can’t call me up out of the blue, demand I see you, and then act all pissy if I can’t drop what I’m doing and run home. Not after what you pulled last time. I’m lesbian, Dad. I’ve been lesbian, I’m going to be lesbian. Nothing is going to change that.”

“I know.” The defeated tone in his voice scraped against Eun’s battered heart.

Her father disconnected the call. Eun fell back into her chair. Late afternoon sun raked the tops of the high-rise buildings surrounding the office building. Red-and-orange light, reflected off the glass, shone through the floor to ceiling window and glinted off the framed print on the wall opposite her desk.

Her stomach rumbled, an audible reminder of her neglecting to eat breakfast and lunch. She tapped her pen on the desk and glowered at the stack of transcripts on her desk as she rang her assistant. “Order us some food, please.’

“Have a hankering for anything?” Sally’s soft drawl spilled through the phone.

“I will be.” Eun spun her pen in a circle, a wave of guilt for keeping her assistant after hours swept over her. “You don’t have to stay. John must miss you.”

“He does. But he also knows how important this case is. Faizal’s okay?”

“Sounds wonderful. That gyro salad they do.”

Eun’s mouth watered at the thought of the sticky honey-sweet dessert. “Of course.”

Eun hung up and spun in her chair to face her bookshelf. The black-framed photo of Eun and her father at her law school graduation was opposite a photo of Eun and her mother at Eun’s kindergarten graduation. She closed her eyes as the memory of the last fight she’d had with her father surfaced. Anger and humiliation over his demand she go to conversion therapy surged through her as strong and as raw as that evening. Memories of other interventions, his relentless set-ups with eligible young men, and the shocked expressions of his church friends when she told them all the only thing she was sure of was they were all going to hell bubbled to the surface.

Her stomach ached: too much coffee, and not enough food. She reached into her drawer for the ginger chews she kept at hand. She unwrapped one and popped it into her mouth to quell her stomachache and glanced at the clock on the computer screen. It would be at least forty-five minutes before Sally was back with their food.

Her phone vibrated with a message. The glowing read notification sent a rill of excitement down her spine. Maybe a quick fuck would be the ticket to a good night’s sleep. A glorious, no-real-names hotel-room sex fest would be delightful. She thumbed open the Hit Me Up app and opened the message.

Disappointment washed over her. The message was from her most recent date. A bold butch who had given Eun several mind-bending orgasms that had made her strongly reconsider her self-imposed no-more-than-one-date rule. Until she stalked the woman on social media and found out she was not single as her profile claimed. Eun detested cheaters. She deleted the woman’s message without reading it and tossed her phone on to her desk.

My Review:
Eunice Park is an out lesbian litigator living in Chicago. She is estranged from both her parents for different reasons. Her father essentially disowned her for being gay, while her mother left when she was young due to a drug habit. She’s startled when her father calls–after 5 years of no contact–and demand she come home to see him. Eun can’t really take off on a whim, but she makes plans to come the following weekend. And, then forgets due to work stress. And, the next call Eun receives from her hometown of Sikesville, Ohio is from the police letting her know her father has died.

Morgan Wright is a locksmith, running her family business and the person the police (her sister) calls on for a welfare check ad Mr. Park’s home and office. So, she’s there to discover the body and Mr. Park’s rambunctious dog. A softie for fostering strays, Morgan brings home the abandoned pooch. It’s not long before she encounters Eun, who is struggling with the guilt and frustration of missing her father while still being so angry at how their once-loving relationship changed. Her mother is no support, and her uncle is hateful, homophobic and out for his inheritance. Morgan’s steadfast companionship is a boon, and helps her weather some of the immediate storms.

The funeral is one thing, and their quick connection makes the intimacy between Eun and Morgan even more bittersweet, because Eun knows she needs to return to Chicago and face the wrath of the senior partner in her practice over the last case that went terribly wrong. Eun has no reason to stay in Sikesville, even with a growing attraction to Morgan, but bigger forces are at work, and Eun’s dad’s journals seem to be key in getting to the bottom of what seems a secret affair and perhaps extortion. Eun’s about to set out for Chicago when the mystery takes a turn into arson.

And, Morgan’s not so please being considered a bit of distraction–even knowing that Eun isn’t meant to remain n their small town. But, the more tragedy that sets in , the more that Eun realizes her life has been devoted to the dreams of others, and she now has the opportunity to start living her life for her own self, and with a woman who’d be proud to stand by her side.

It’s a sweet and sexy story with lots of struggles and make-up sex and two classy ladies that find a home in one another–wherever that might be. I liked the clash of cultures and how Eun navigated the disparate parts of her life. There’s a bit of drama near the end that went way into the danger zone, but it was only obliquely related to Eun and Morgan, so I didn’t get too worked up over it. Let’s just say that dinner at Mai’s restaurant was never so bloody! We got a little glimpse of the stories from ON THE SQUARE, and I think a look forward into a future love story.

Interested? You can find LOCKSET on Goodreads, NineStar Press and Books2Read.

I hope you enjoy reading this book as much as I enjoyed writing it. For a free short story, information on book signings, appearances, work in progress snippets, previews and sneak-peeks, sign up for my email list.