Hi there! Today I’m sharing a review and giveaway for a contemporary M/M romance from RJ Scott. TODAY is the second book in the Single Dads series, and features a gay man with emotional issues raising his orphaned niece and nephew, and falling for the sexy firefighter who doesn’t see him as broken. We met both of these MCs in the first book of the series, SINGLE, but this story is really all about them. 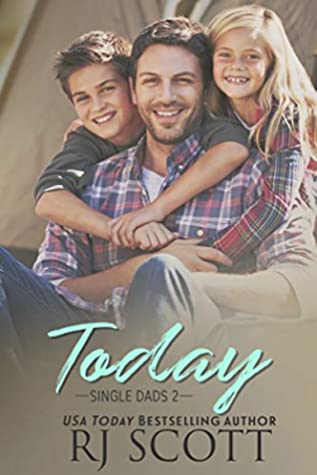 About the book:
When the world labels a man and judges them blindly, is it possible to ever find love?
Firefighter Eric is on the front line, battling the threat of nature’s destruction in the California grasslands alongside his CalFire team. Focused and calm, even in the direst of situations, he has a strong affection for his fire truck, loves his career, and has best friends he can rely on. All he needs now is love, but that seems to be impossible to find. At his friend’s wedding. Eric falls in lust at first sight with the shy, slim and sexy Brady, even if Brady isn’t the type of guy he usually goes for. What Eric longs for is an equal in his bed, not a smaller guy who might want Eric to role-play big strong firefighter every time they have sex. He wants to find someone he can be vulnerable with, someone who will love him for his soft heart and quiet ways.

Brady’s life plans grind to a halt when his niece and nephew lose their parents in a tragic accident, and he becomes a dad overnight. His Developmental Coordination Disorder rules his life, but he fights both DCD and the fears that chase him every day, to give Maddie and Lucas a home. Agreeing to go to a friend’s wedding is a decision he regrets long before he even gets there. But, he refuses to give in to his fear, even if he might do something that makes him a target for people’s comments and laughter. Meeting Eric, a huge man with a gentle voice and a flair for chivalry, he falls hard. Now, if only he can let himself get past his panic that Eric would never want someone like him, then maybe he could fall in love for real.

My Review:
I am sharing a review of the audiobook, narrated by Sean Crisden, which lasts just about 4.5 hours.

Eric Lester-Hythe is a firefighter in the San Diego crews who prefers to keep a low profile–so folks don’t associate him with his father, a senator from California. Not that he doesn’t love his dad–de totally does–he just wants people to like him for who he is, not as some part of a power brokerage. Eric lives with his two childhood best friends, Sean Roberts an ER doc and Leo Byrne a cop, but the day this story opens, Sean is marrying the love of his life, their next-door neighbor Ash. So, Eric will be down a roommate, but up a surrogate niece as he loves Ash’s daughter Mia just as much as her daddies, and Leo.

At the wedding ceremony, Ash asks Eric to watch his online friend, Brady, who has arrived with his own niece and nephew to help support Ash in his new married life. Eric is all too happy to agree, because he finds Brady to be very attractive, and he wants to ensure that Ash’s friend has a good visit. Ash and Brady met as part of an online support group for single gay dads, and Ash knows that Brody is not comfortable in public spaces, or while surrounded by strangers. Turns out Brady has Developmental Coordination Disorder, as well as anxiety. This means he’s sometimes unable to interact with coordinated movements, and he trips or drops things suddenly, and this condition is exacerbated when he’s nervous. He is almost ready to bolt before the ceremony kicks off, but Eric is there, and his bulk and sexyiness unexpectedly calm Brady. In fact, Brady is so keyed up he falls over, trips, and feels generally mortified–but follows his instincts to kiss Eric with perfect coordination.

Eric is smitten, actually. He’s tired of partners who want him to take charge all the time. Brady’s forwardness is a huge turn on, and get Eric tracking Brady to his home to deepen their connection. Brady is a self-described hot mess,

This audiobook is really a great listen. Narrator Sean Crisden has a great range for the many male characters in the story. The angst that Brady feels is clearly translated, as is Eric’s exhaustion with his challenging job. I loved how these men supported and complimented one another. Eric is sweet with Brady’s kids, and helps him see that he’s truly a father to those kids, who really loved him dearly. They are so endearingly protective of Brady. Brady grows a lot, finding the steadfast love of such a good man as Eric gives his the confidence to trust in himself in a way that he hasn’t before. The dual narration is successful for allowing listeners to drop into the mindscape of each character.

There are a few sexytimes, and they are nice and steamy. Brady is nearly reckless with his attraction to Eric, and that was fun to experience.

Interested? You can find TODAY on Goodreads and is available to Kindle Unlimited members on Amazon. I listened to the audiobook from Audible.

About the Author:
RJ Scott is the bestselling romance author of over 100 romance books. She writes emotional stories of complicated characters, cowboys, millionaire, princes, and the men and women who get mixed up in their lives. RJ is known for writing books that always end with a happy ever after. She lives just outside London and spends every waking minute she isn’t with family either reading or writing.

The last time she had a week’s break from writing she didn’t like it one little bit, and she has yet to meet a bottle of wine she couldn’t defeat.