Hi there! Today I’m sharing a review for a brand-new contemporary M/M romance from Alexis Hall. BOYFRIEND MATERIAL is a sweet and sassy love story for a tangentially-famous man and a bit of neurotically-ethical barrister who agree to be temporary fake boyfriends. 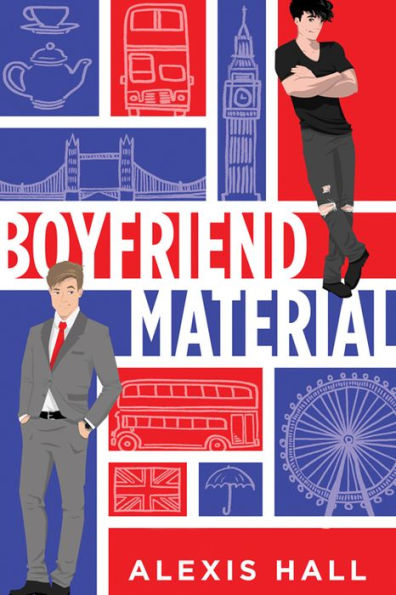 About the book:
Wanted:
One (fake) boyfriend
Practically perfect in every way

Luc O’Donnell is tangentially–and reluctantly–famous. His rock star parents split when he was young, and the father he’s never met spent the next twenty years cruising in and out of rehab. Now that his dad’s making a comeback, Luc’s back in the public eye, and one compromising photo is enough to ruin everything.

To clean up his image, Luc has to find a nice, normal relationship…and Oliver Blackwood is as nice and normal as they come. He’s a barrister, an ethical vegetarian, and he’s never inspired a moment of scandal in his life. In other words: perfect boyfriend material. Unfortunately apart from being gay, single, and really, really in need of a date for a big event, Luc and Oliver have nothing in common. So they strike a deal to be publicity-friendly (fake) boyfriends until the dust has settled. Then they can go their separate ways and pretend it never happened.

But the thing about fake-dating is that it can feel a lot like real-dating. And that’s when you get used to someone. Start falling for them. Don’t ever want to let them go.

My Review:
Luc O’Donnell is in his late 20s and son of 80s rockers. His parents never married, and he never actually met his father, Jon Fleming, who’d moved on and toured with a different band, making a tabloid nuisance of himself for the most of Luc’s youth. His last serious boyfriend sold stories of their relationship, including compromising pictures, for an interview, and it’s left Luc feeling emotionally violated and preternaturally suspicious of any man who might take an interest. Now, Jon Fleming is back on the British music scene as an advisor to rock wannabees on a reality show. And, Luc’s many foibles are prime for the tabloids to print. Luc works as a fundraising manager for an obscure dung beetle charity, and this miserable job is in jeopardy when some of the usual donors take offense to the sensationalized antics that Luc hasn’t really committed, but are now in the papers.

He’s got to find a respectable boyfriend to win back the snooty donors, or find a new job. But who will hire this pariah? Better yet, who would really date him?

Luc’s friend sets his up with Oliver Blackwood, a decent and ethical vegan barrister who Luc is sure looks down on him from his moral high ground. Oliver is in dire need of a partner for his parents’ anniversary luncheon, and he’s willing to become part of Luc’s circus life to make this onerous occasion palatable. Luc tells the story so we get a lot of his emotional issues, but he begins to see that Oliver’s seemingly perfect life is a carefully constructed facade to paper over the isolation he’s long felt in his family.

Luc and Oliver are the sweetest men, both needing love and reassurance that they aren’t making horrible messes of their lives. Fleming’s not only on the telly, he’s making in-roads with Luc’s mum and seems to want to make amends to Luc, as well. Luc’s horrified by the tawdriness of the situation, and leans heavily on Oliver’s steadfastness to survive some of these encounters. Oliver is a great guy, noble yet a little sanctimonious, but he treats Luc better than a boyfriend, and Luc strives to be even half as good. Their communication becomes more necessary than perfunctory, and they develop a bond that neither wants to acknowledge in total–because they believe this is a meant to be temporary.

I love fake boyfriend tropes, and this one is extremely well-done. The friends and family drama is on point, and Luc’s self-deprecating humor is a constant delight. His sensitivity and emotional vulnerability are so raw, and I was glad that a good man like Oliver was there to help him patch himself up. Their sexytimes are tentative, at first, but tender and loving as they gain a keen interest in one another.

I honestly fell hard for Luc, and his quest to live a decent life and have a decent guy was so engaging. He’s got a brain that never shuts off, and it was a bit of a thrill ride as his feelings for Oliver ramped up. It was hysterical how Luc figuratively and literally cleaned up his life–including his apartment, because he wanted to be someone that Oliver could admire–not even realizing how much Oliver admired him already. I loved how he stood up for Oliver, especially against Oliver’s own family who all treat him rather shabbily. There’s a big conflict near the end, where Luc needs to make a grand gesture and it surely goes to heck in a handbasket, but he still ends up winning Oliver back for a happy ending.

I finished reading this a couple of months ago, but re-read it so it would be fresh for the release. It’s a book worth reading over again, and I still laughed out loud repeatedly as I absorbed Luc’s deep-seated self-consciousness for the second time. I loved these guys and was only sad to see the book end.

Interested? You can find BOYFRIEND MATERIAL on Goodreads, Amazon, Barnes & Noble, and Apple Books. I received a review copy of this book via NetGalley.

About the Author:
Alexis Hall was born in the early 1980s and still thinks the 21st century is the future. To this day, he feels cheated that he lived through a fin de siècle but inexplicably failed to drink a single glass of absinthe, dance with a single courtesan, or stay in a single garret. He did the Oxbridge thing sometime in the 2000s and failed to learn anything of substance. He has had many jobs, including ice cream maker, fortune teller, lab technician, and professional gambler. He was fired from most of them.

He can neither cook nor sing, but he can handle a 17th century smallsword, punts from the proper end, and knows how to hotwire a car. He lives in southeast England, with no cats and no children, and fully intends to keep it that way.