Hi there! Today I’m sharing a review for a contemporary rock romance from MJ Roberts. ROCK HARDEST is the third book in her Chords Brothers series and features a rocker trying to get his life and band together and the sexy drummer he falls hard for…

Scroll down for my review and to enter the books + $25 Amazon GC giveaway! 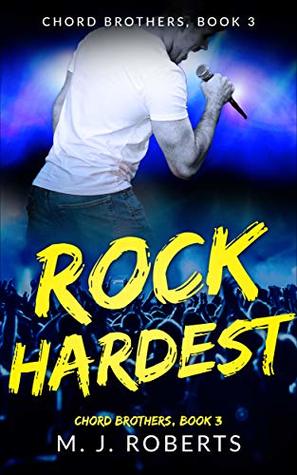 About the book:
Cole’s world shattered seventeen years ago. Now he’s got one chance to get his life back on track. Hoping that going back to music will ease his tortured soul, Cole starts his own band. There’s only one problem— he can’t find a drummer.

T.J. Casarez is stuck working in her family’s restaurant until her cousin calls her to audition. Cole’s not expecting a female drummer. Yet from the first beat they sizzle. But there’s no way she’s getting involved with a privileged pretty boy. She’s been burned before, and dating a band member is a recipe for disaster.

Only… it’s not just their onstage chemistry that’s on fire.

My Review:
Cole Chord is the elder brother of Ryder Chord–Ryder is an international rock star, and Cole regrets stepping away from music in his late teens due to a family tragedy. In the intervening years Cole had a drug problem–though he’s been clean for years now. Now, Cole’s 34. It’s 17 years since he left his original band, and he’s a very wealthy real estate tycoon in L.A. Cole is ready to chase his dream of music stardom. He hires a wild and outrageous bassist, Tremor, and a guitarist who might just KEEL you–Spider. With no non-addict + talented drummers showing up for an audition, Spider calls his cousin TJ for an impromptu jam session/audition. TJ turns out to be a sexy and sassy woman–and she makes Cole sit up and take notice.

TJ is in her mid 20s but she still lives in a family-owned apartment above one of her family’s Mexican restaurants. Her brothers and extended family are especially protective, and TJ herself doesn’t want to date any man–not after the last guy–a wealthy white man–broke her heart, their engagement, and left her in deep debt. So, while she finds Cole attractive, she doesn’t want anything physical to happen between them…or does she?

Cole’s real estate empire SHOULD run itself, but a misdirected call for assistance from a disgruntled tenant tips Cole off to a burgeoning problem of fraud that may have been perpetrated by his long-time business partner. Knowing that man has mafia ties makes Cole especially wary. Could this situation torpedo his day-job, or his new chance with his nascent band? The chemistry between the members of Phoenix Rising is growing, helped out a bit by Ryder’s support–and that of his friends, other rock superstars and friends of Cole, too. And, the chance to open up for Ryder’s band on a leg of their European tour really palys havoc with their lives–in a good way.

TJ realizes she needs to stand up to her overbearing family, but the boost she gets from Cole makes all the difference. She could barely resist him as it was, and now she’s swooning. And Cole’s a half-mile ahead of her into complete attraction and maybe true love.

This alternating POV rock romance is heavy on Cole being an absolutely-awesome human who cannot do enough to make his and everyone else’s lives easier, busier and more lucrative. He’s like an angel come to Earth. Meanwhile TJ is as aggravating and unlikable as I can imagine a female lead–without her being a sheer criminal or abusive cheater. She’s all about the tease, and then pull away. She takes gossip for gospel and deliberately hurts Cole time and time again. Instead of having ONE adult conversation, TJ flounders, and nearly squanders, her opportunity with Phoenix Rising. All the supportive folks are on Cole to make things right with TJ and it felt pointless because their biggest conflict was her unprofessional behavior. I didn’t connect with TJ much at all, and for that I struggled to understand the relationship. It seemed superficial and forced. Likewise, the resolution Cole developed to keep TJ from thinking he’d use his money to entrap her was almost ludicrous. Since I seriously couldn’t fathom how Cole became so uber-wealthy in the first place, his plan to fully-woo TJ was especially befuddling.

Interested? You can find ROCK HARDEST on Goodreads and Amazon.

****GIVEAWAY****
Click on this Rafflecopter Link to enter for your chance to win a 3-book set of e-books (Rock Hard, Rock Harder and Rock Hardest) from MJ Roberts, or a $25 Amazon GC.
Good luck and keep reading my friends!

About the Author:
Fan favorite M. J. Roberts is known for lovable characters, witty dialogue, exciting plot twists, fast-paced action that keeps you on the edge of your seat, and romance scenes that sizzle.

With more than two million copies of stories in circulation worldwide, Roberts is well loved for creating characters who feel as real as your most cherished friends.

Roberts is also an editor, songwriter, audiobook narrator, and professor of creative writing. A modestly humble egomaniac with a penchant for superheroes, she’s married to an awesome professional musician (a.k.a. The Rock and Roll God). Her ‘I’m with the band’ status and access to a bunch of real-life alpha bad boys means she’s always saying ‘Anything you say can and will appear in print. Names will be changed to protect the guilty.’