Scroll down to open the link for a copy of THE VIRGIN KING in a giveaway! 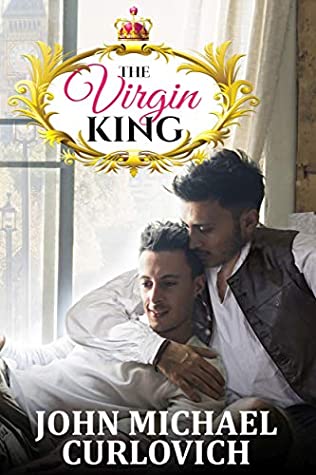 About the book:Something is rotten in Bulvania. When the old king dies mysteriously, a young monk named Raymond is called to take his place.

On the other side of the world, Logan, a handsome photographer, is pulled away from his charmed life to assist his father–Bulvania’s newest American ambassador.

As Raymond struggles to balance the weight of his new crown and the dark past adorning it, he must also struggle with his new love for Logan, who may already have his hands full with a variety of strapping military men.

My Review:
The king of Bulvania has died in a tragic industrial accident. Though his widow wants to ascend to the head of state, but there is a distant cousin of the king that still lives–Brother Juniper is a sheltered monk in one of the remote mountain monateries. The Royal Guard, consisting of a cadre of extremely fit and sexually agile men, collect Juniper for his coronation as King Raymond XL. He’s about 20, and completely naive to court and it’s deadly intrigue.

Logan Bockwein is an unapologetic single gay man who’s always looking for his next good time. He’s an accomplished photographer, and has recently had an exhibition of erotic art at a renown D.C. gay art gallery. Then had some fun multipartner action including his ex, a State dept undersecretary. Logan’s dad is PT Bockwein, president and CEO of Zinc, Inc–a tin and zinc mining company. The Bockweins have some Bulvanian heritage–which is rather uncommon as Bulvania is a really small eastern European nation and nearly no one has heard of it. The biggest export of Bulvania is cuckoo clocks, but the country also has a large unmined resource of tin. And, PT Bockwein, as the only influential American with Bulvanian heritage, has just been named as the US Ambassador. He’s insisting Logan come along. And, Logan is NOT happy about it.

Logan is less than impressed with the monk-king, who still dons his shabby robe and hasn’t cut his beard or hair….ever. But Raymond/Juniper is captivated by the cultured, young, and sexy Logan. The king’s guards make for way better playmates, in Logan’s opinion, but Alex, the captain of the guard convinces Logan to become a friend to the king, who is in grave danger from the same folks who likely murdered his royal cousin.

This book is truly a romp into the erotic, with Logan literally having sex with virtually any and every man who is not the virgin king for the first 90% of the book. Alex sees that Raymond’s attraction is growing desperate, and he wants to facilitate a relationship that would benefit Raymond and Bulvania. The grand plan is an absence makes the heart grow fonder situation, with Logan in forced celibacy while the new king tours Europe. It’s really a funny bit that Logan–who has unparalleled powers of attracting bemates can’t get anyone to sleep with him for more than a month. And, when Raymond returns, well, Logan is more than fond of the made-over king.

If you are into kinky, gay erotica that has a strong sense of knowing its plot is silly and a little ludicrous, then you will smirk along like I did at Logan’s tale of love. I liked it, taking the humor and puns and outlandish situations in the style of Monty Python meets a gay bath house. There’s some plotting and evil folks, and lots of dudes getting it on. And, in the end, Raymond finds peace in his new roles as both King and lover.

Interested? You can find THE VIRGIN KING on Goodreads, Riverdale Avenue Books, Amazon, and Barnes & Noble.

Click on this link and enter for your chance to win a copy of THE VIRGIN KING, courtesy of the Erie Gay News!
Good luck and keep reading my friends!