Hi there! Today I’m sharing a review for a M/M contemporary paranormal romance from EJ Russell. DEMON ON THE DOWN-LOW is the third book in the Supernatural Selection series that follows supes of all types finding love through a witch-run online matchmaking service. I’ve shared reviews for the two previous stories in this series, SINGLE WHITE INCUBUS and VAMPIRE WITH BENEFITS, which should be read first for best enjoyment. These books are a spin-off from the Fae Out of Water series, and set in the same world as CUTIE AND THE BEAST, THE DRUID NEXT DOOR, and BAD BOY’S BARD. 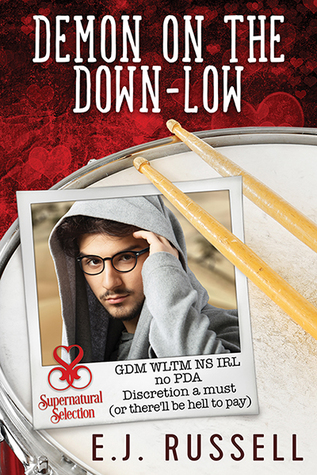 About the book:
After decades of unrequited love, this kangaroo will jump at the chance for a date. Any date.

Lovelorn kangaroo shifter Hamish Mulherne, drummer for the mega-hit rock band Hunter’s Moon, waited years for the band’s jaguar shifter bassist to notice him. Instead, she’s just gotten married and is in a thriving poly relationship. How is Hamish supposed to compete with that? But with everyone else in the band mated and revoltingly happy, he needs somebody. Since he can’t expect true love to strike twice, he signs up with Supernatural Selection. Because what the hell.

When Zeke Oz was placed at Supernatural Selection through the Sheol work-release program, he thought he was the luckiest demon alive. But when he seems responsible for several massive matchmaking errors, he’s put on notice: find the perfect match for Hamish, or get booted back to Sheol for good. The only catch? He has to do it without the agency’s matchmaking spells, and Hamish simply will not engage.

But Zeke starts to believe that the reason all of Hamish’s dates fizzle is because nobody in the database is good enough for him. And Hamish realizes that his perfect match might be the cute demon who’s trying so hard to make him happy.

My Review:
Hamish Mulherne is a kangaroo shifter who also plays drums in the super popular band Hunter’s Moon, but he’s been not-so-secretly in love with the band’s bass player, Tiff, for four decades and she’s finally settling down…with sibling jaguar shifters. Instead of pining, Hamish is contacting Supernatural Selection to find his perfect match–for a date to an impending wedding, and probably for a marriage himself.

Zeke Oz is a low-level minion demon who is the single applicant for the Sheol work-release program. The Supe council had been leaning on the Host for some reforms in Hell, and this was the compromise. Zeke doesn’t know why more demons didn’t escape to the Upper World when he did, but he’s relishing this freedom even if it’s not a perfect situation. He has an Angel Interface observer monitoring him from within a glowing cylinder that hovers in close proximity at all times. And, he’s barely paid enough to afford a little bit of human food from time to time. Well, he makes enough in wages, but he has to turn over most of that to his demon overlord, Melchom. The Supernatural Selection spells have all been taken offline, however, due to some match irregularities, leaving Zeke at loose ends. It’s a big surprise when Hamish arrives for his matching appointment.

Hamish isn’t picky about his lovers, which is a big problem for Zeke. Zeke has been ordered to make Hamish happy, and Hamish won’t engage in the process. If Hamish isn’t satisfied, though, Zeke will lose his job and have to return to Sheol. He makes a couple promising matches for dates, but they both turn out disasters for different reasons–and that’s when Hamish realizes that Zeke being nearby REALLY makes him happy. But Zeke has been a demon slave his whole existence, and Hamish doesn’t want to force him into a different kind of servitude. With a little luck, and some pre-concert champagne, these two make the most unlikely of connections.

This is the third book in the Supernatural Selection series, and sports the return of all five couples from this series and the linked Fae Out of Water books. It’s a culmination of paranormal power, which is lucky for Zeke as he has some close-to-home attacks to weather, as well as the heart-tearing decision of whether to collect Hamish’s soul–on Melchom’s orders. The end is pure Orpheus, with a dash of sassy drummer and a splash of demon in transition. The biggest enemy was in plain sight the whole time, and I liked how we knew that, without knowing the full extent of it until the climax. In the end, this is such a fun world, with such loving and lovable characters that I was sad to see it brought to a close…

Imagine my delight when I learned there is a NEW book coming out this week! Look forward to a review in the coming days.

Interested? You can find DEMON ON THE DOWN-LOW on Goodreads, Riptide Publishing, Amazon, Barnes & Noble, and Kobo. I received a review copy via NetGalley.

About the Author:
E.J. Russell writes romance in a rainbow of flavors — from M/F stories grounded in absurd contemporary reality to M/M tales splashed with the supernatural — but you can be sure that while the couple makes their way to HEA, they’ll never stray too far into the dark.