Hi there! Today I’m sharing a review and giveaway for a new paranormal M/M romance from a new-to-me author, Brooklyn Ray! PREDATORY is the third novella in the Port Lewis Witches series featuring a young shifter-witch coming into his own to help two of his circle mates, and his boyfriend, survive the wrath of Leviathan, Sea Queen. I have read the two previous titles in this series, but I won’t get to share those reviews until next week.

Scroll down for an excerpt and to enter the $10 GC giveaway. 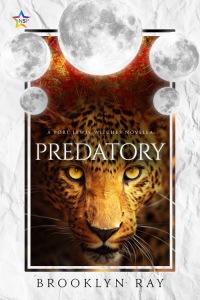 about the book:Donovan Quinn is faced with the impossible: unleashing the wild energy inside him. In the aftermath of a rushed, thoughtless sacrifice, his circle mates brainstorm a plan to appease the Queen of Water. Meanwhile, Donovan desperately tries to find a way to access the lonely Earth magic hiding inside him.
​But with his heart reaching for Tyler, the aggressive and volatile head witch of his circle, and friendships being tested at every turn, Donovan is at a standstill with his magic. Saving his friends, his circle, and his heart becomes far more complicated than he ever thought.
How about a little taste?

My Review:
This is the third book in a series of witchcraft in the Port Lewis area of Washington state. I think this book is best enjoyed if read in sequence.

Donovan is an earth witch joined in a circle with four others: the circle leader Tyler, an air witch with whom Donovan has regular D/s hook-ups, Liam, a water witch who has royally pissed off Leviathan, Christy, a psychic, and Ryder, a fire witch who also practices dark magic….

Their circle is all off balance due to the dark magic, and Leviathan is demanding some tribute, which could be Liam, if they can’t get a big, bad strong witch to protect him. Unfortunately, they all think it could be Donovan, who has hardly been able to tap the extent of his power. Donovan’s father was a leopard shifter, but Donovan didn’t learn the secret of that magic before his dad was killed.

Donovan is unwillingly solitary, because he and Tyler don’t have a solid relationship. Donovan is afraid to ask for what he needs, and Tyler doesn’t know he isn’t giving Donovan the support he needs. Meanwhile, Tyler struggles to hold his circle together while his abusive parents make trouble.

This is a really inventive witchcraft series, where all the characters are way ore than their magic, and have to struggle with power they never intended to wield. They do not always make “good” decisions, but they do rely on one another and develop strong bonds—both magical and emotional. Donovan wants to be claimed by Tyler, and once he finally asks, he reaps an amazing bounty of love. There are D/s elements here but they are not intense.

The first two books center on Ryder and Liam, with Donovan playing a supporting role—these stories set up the conflict between Tyler and Ryder and Liam and Leviathan, which is why I think they should be read first. There is a little bit of world-building up front, but it pales compared to the full story. Having read all three books, I’d definitely read on.

About the Author:
Brooklyn Ray is a tea connoisseur and an occult junkie. She writes queer speculative fiction layered with magic, rituals and found families.