Hi there! Today I’m sharing an excerpt and giveaway for a new contemporary M/M romance from DJ Jamison. RAPID RESPONSE is the eighth book in the Hearts and Health series, but fully enjoyable as a standalone. Other books I’ve enjoyed by this author include LOVE BY NUMBER and FULL DISCLOSURE, so I’m looking forward to reading this one!

Scroll down for the excerpt and to enter the $10 Amzzon GC giveaway! 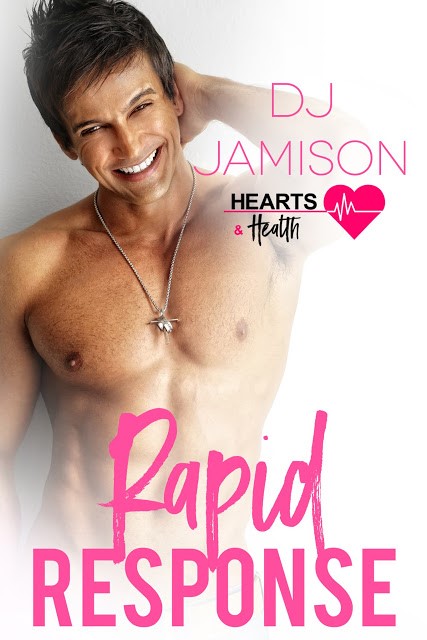 About the book:
A confused straight guy and a gay hookup artist walk into a bar…
Firefighter Sean Connolly is straight — until one impulsive night changes everything. He tries to dismiss it as a fluke, but when a fire rescue leads him back to the guy who blew his mind, he’s thrown into a chaos of confusion and want. He gives in to curiosity, exploring a new side to himself — not just his attraction to a man, but his desperate need to please.

But as feelings deepen, doubts surface. Sean is in the closet, and Jace struggles to trust his promise that it won’t last forever. With family conflict and his career in the balance, Sean finds it difficult to picture his life without secrecy, but if he doesn’t find a way, he may lose the one person he most wants to please.

Rapid Response is the longest novel of the Hearts and Health series at approximately 92,000 words! It can be read as a standalone.

Sean glanced into the mirror, and though he looked like the same guy on the outside — dark hair, dark eyes, unremarkable face — he didn’t recognize the one on the inside. And that was scary.

“For what? Staring at my mouth, or for hiding from yourself?” Jace asked caustically.

Sean swallowed hard. His traitorous eyes found Jace in the mirror, locking on the mouth in question. Pink, full lips. Jace had been a good kisser. A good … sucker.

Sean jerked his gaze to Jace’s eyes, which bored into him, their power not diluted in the slightest by the mirror acting as their go-between. Could Jace see what was inside? If he could…

“What, Sean? What didn’t you realize?”

“That you like my mouth? That you want it on you again? That you—”

Sean spun around. “Shut up.”

His breath caught. “What?”

Sean hesitated, and Jace smirked. “Yeah, I didn’t think so.”

Frustrated and frazzled, Sean acted on instinct, doing exactly what Jace had asked. He grabbed the front of Jace’s shirt, spun him around, and shoved him against the counter containing the row of sinks.

Then he kissed him.

To make him shut up.

It was the only way to get him to stop talking. Gloating. Jace had practically ordered him to do it, the bastard. And Sean needed to shut up the doubts in his head, too.

He closed his eyes, blocking out all thought, and sank into the feeling of Jace’s perfect, hot mouth on his again.

My Review:
Firefighter Sean Gillespie thinks he’s supporting his newly out bisexual brother when he attends a drag night at a gay club. Only, his brother doesn’t show up. Still interested in the show, he’s cajoled into hanging out with Jace and his female bestie. They share beers and chat, Sean admitting to his confusing attraction to the performers. Jace thinks Sean is hot, but gets that he’s not gay, still, he lets his gal pal talk Sean into more drinks at Jace’s apartment. And once there she puts the moves on Sean–convincing him to let Jace pleasure him. It seems to go great, but Sean panics in the end, leaving Jace frustrated.

A couple months rolls by and Jace and Sean reconnect at the scene of an apartment fire. Sean carries a missing girl to safety, but is injured at the scene. Jace is the paramedic who treats him. The girl’s mother is overjoyed by the rescue, and her letter to the paper sparks a PR outreach that catalogues Jace and Sean on outings with the girl and her mother. The more time Jace and Sean spend together the more the attraction grows between them. Jace is just a little bit dominant and that stokes an unknown service kink for Sean.

Sean is struggling with his sexual identity–because he has homophobic crew mates in the firehouse, and his eldest brother has seemingly disowned their middle brother for coming out as bisexual. Still, he’s falling hard for Jace, and takes to spending more and more time with Jace, if only to escape the trouble he’s facing after he takes his eldest brother in off the street–his wife kicked him out for being an insufferable pig and a drunk.

Jace hasn’t had any relationships in a long time, and what’s happening with Sean is feeling like it could be a relationship, if only Sean would come out. Because he won’t well, they fight. And it’s a short bit of heartbreak. I liked the cast of characters here. Both Sean and Jace are decent guys, and they fall hard for one another. Jace knows how much crap Sean will get for coming out publicly, as he’s experienced it firsthand. He won’t push Sean to action, but he also can’t live a shadow-life of happy times behind his apartment door. It felt really realistic, and understandable. The climax, however has some definite heartbreak. Sean figures out what he needs to do, but the timing is complicated. And there’s some family drama and tragedy that he needs to work out. The grand gesture at the end is sweet, and leaves the door open for the next romance in the series. I’ll be keeping my eyes open for that one.

Interested? You can find RAPID RESPONSE on Goodreads and Amazon.

Click on this Rafflecopter giveaway link for your chance to win a $10 Amazon gift card.
Good luck and keep reading my friends!

About the Author:
DJ Jamison is the author of more than a dozen m/m romances, including the Ashe Sentinel series and the Hearts and Health series. She writes a variety of queer characters, from gay to bisexual to asexual, with a focus on telling love stories that are more about common ground than lust at first sight. DJ grew up in the Midwest in a working-class family, and those influences can be found in her writing through characters coping with real-life problems: money troubles, workplace drama, family conflicts and, of course, falling in love. DJ spent more than a decade in the newspaper industry before chasing her first dream to write fiction. She spent a lifetime reading before that, and continues to avidly devour her fellow authors’ books each night. She lives in Kansas with her husband, two sons, two fish and, regrettably, one snake.