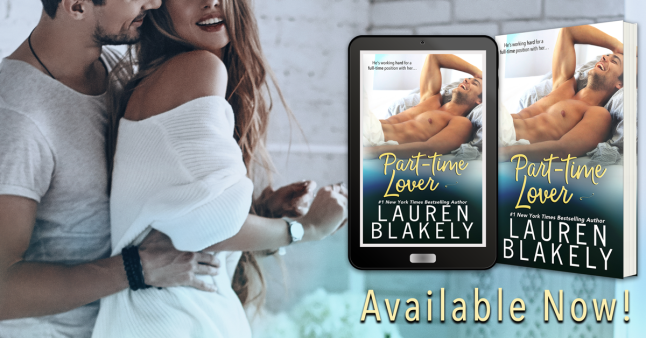 Hi there! I’m excited to share a review and giveaway for a new romance from Lauren Blakely. PART-TIME LOVER is an unexpected romance between two people burned by bad marriages making a bold attempt to right an injustice…through sexytimes. I loved STARS IN THEIR EYES and thoroughly devoured this one!

Scroll down for a tasty excerpt and be sure to enter the HUGE giveaway too!

About the book:
I’ll say this about Christian — he made one hell of a first impression. When I first saw the strapping man, he was doing handstands naked on a dock along the canal. His crown jewels were far more entertaining than anything else I’d seen on the boat tour, so I did what any curious woman would do — I took his photo. I might have looked at the shot a few dozen times. Little did I know I’d meet him again, a year later, at a secret garden bar in the heart of the city, where I’d learn that his mind and his mouth were even more captivating. But given the way my heart had been trampled, I wanted only a simple deal — No strings. No expectations.

Let me just say, this whole part-time lover thing was her idea. I’d have gone all-in from the start, but hey, when a gorgeous, brilliant woman invites you into her bed, and only her bed…well, I said yes.

But then, one hysterical phone call from my brother later, begging me to find myself a wife so grandfather’s business stays in the family, and I need a promotion with Elise. Turns out a full-time husband suits her needs too, and a temporary marriage of convenience ought to do the trick, until we can simply untie the knot…

But our ending was one I never saw coming.

How about a sexy taste!

The boat slides under another bridge then motors through a more residential area, passing homes on the water and private docks every few feet. My eyes hungrily eat up the view. My current hometown of Paris is my love, but I could get used to weekends in Copenhagen. It’s a delightful mix of old and new, like a Swiss alpine town mated with a futuristic sky-rise city.

As I gaze at the sun-soaked homes, I imagine lazy afternoons drinking strong coffee on the deck, reading delicious tales under the rays. That seems like a recipe for happiness for the rest of my days.

I want to feel that way. Happy. It’s been so damn elusive lately, and for a fleeting moment, it feels as if I grasp it again, so I’m no longer teetering on the edge of grief and shame.

But that’s why I’m here, to move past that terrible duet.

I try valiantly to simply enjoy everything in front of me: the buildings, the water, the view.

As we round the bend in the canal, I blink at the view.

Nearby is a private dock.

On that dock is a man.

He’s performing a downward-facing dog, and his rear is facing us.

What a spectacular ass.

It’s not covered in sweatpants or basketball shorts.

It’s au naturel, as finely sculpted as the statue of David.

He’s a dog all right.

I practically stand. I lean on the edge of the boat, agog. I won’t even pretend I’m not looking. I’m ogling.

The Japanese friends whisper and point. The couple shifts closer to get a better look. The college girls titter and laugh.

We slide along on the calm water, and now we’re fifty feet away from a sight way better than the Little Mermaid statue, more magnificent than the royal palace.

He bends forward, pressing his palms into the wood, lifting his legs, and flipping them upside down.

He’s a tall drink of a man, and I’m so very thirsty.

“Look,” I whisper to Veronica, though of course she’s already engaged in the fine art of gawking. “Did you know the Mad Naked Handstander of Copenhagen was on the tour?”

She sighs contentedly. “I am so glad you forced me to go to the buffet.” She parks her chin in her hands, watching the tall upside-down creature.

“My favorite part of the buffet is dessert,” I say, as my eyes gobble him up.

This man wears nudity well, even in this unusual position.

“I enjoyed the rubies and emeralds in Rosenborg Castle, but I like these crown jewels even better,” I say.

And hey, perhaps I’m perving, but I’m an equal-opportunity spectator at this private dock show. I don’t merely peer at the centerpiece of his physique, resting majestically against the grooves of his abs. My eyes take a most happy stroll up and down his carved body, from the planes of his stomach, to his strong thighs, to his arms ripped with muscles. His face is hard to read at 180 degrees, but I see the shape of his cheekbones, carved by angels.

Then, he moves. He walks on his hands. Back and forth.

Showing off his most unique skill set.

Then louder still when he holds himself up on one hand only, waving to us.

“What a show-off,” Veronica says.

Lars clears his throat. “And sometimes, we see the unexpected sights of Copenhagen.”

I do what any curious onlooker might do. I grab my phone and snap.

The man stands, takes a bow, and waves.

My chest heats up. The temperature in me flirts with mercury levels. He’s a stunner. My God, he’s like Skarsgård, from this distance.

And because I believe in speaking my mind, I cup my hand over my mouth and shout, “Bravo. All of it.”

He doffs an imaginary top hat and takes a bow. “My pleasure.” His voice books across the water, his accent a British one.

Sparks unexpectedly race down my chest. That accent is delicious. “Oh no. The pleasure is truly all mine.”

My Review:
Elise is a cosmopolitan woman running her PR firm in Paris, a city were she spent much of her youth, though she was educated in NYC. She’s still getting over the astounding secrets of her recently deceased husband at the beginning of the story. On a girls’ trip to Copenhagen Elise encounters Christian–doing naked handstands on his dock–while taking on a boat tour of the city. Following some banter, she attempts to meet him at a local cafe, only to later learn he was awaiting her at a bar of the same name.

Christian is in Paris a year later, where he meets Elise again. This time, they get things right, and the attraction simmers. Elise isn’t ready for a man to conquer her heart, however, and she makes Christian wait. Their weekly non-dates are smoldering, but not sexual, and it’s a fun cat-and-mouse game until Chistian’s brother runs into some trouble and the easiest way out is through…a marriage of convenience.

This was a fun one! I really liked how Christian and Elise built a friendship which complimented their passion. The rom-com situations were intriguing, and their part-time status as lovers seemed to make their hearts grow ever fonder. There’s a bit of sexytimes, though it’s more romance than steamy, and the feels were intense, on both sides. I couldn’t stop turning the pages near the end, once both Christian and Elise had recognized their feelings had grown well beyond companionship and into true love.

Click on this GIVEAWAY LINK to enter to win a Kate Spade tote and a $50 Sephora GC!
Good luck and keep reading my friends!

About the Author:
A #1 New York Times Bestselling author, Lauren Blakely is known for her contemporary romance style that’s hot, sweet and sexy. She lives in California with her family and has plotted entire novels while walking her dogs. With fourteen New York Times bestsellers, her titles have appeared on the New York Times, USA Today, and Wall Street Journal Bestseller Lists more than eighty times, and she’s sold more than 2 million books. In October, she’ll release HARD WOOD, a standalone romantic comedy. To receive an email when Lauren releases a new book, sign up for her newsletter!

One thought on “Making it Real With a PART-TIME LOVER–Review and Giveaway!”