This month I’m sharing a review for a newly published dragon-shifter romance from Donna Grant. HEAT is the 12th book in her Dark Kings series, and really best enjoyed when read in order. I’ve liked SMOKE AND FIRE, FIRESTORM, BLAZE, and DRAGON BURN, and–being a series junkie–I’m eager to see how this all turns out. 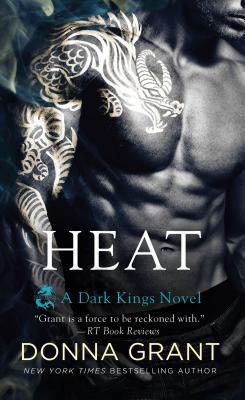 About the book:
Nikolai is a dragon shapeshifter who knows well the meaning of loss. Orphaned and raised to be a Dragon King, he never accepts defeat. Now, Nikolai prefers his solitude . . .until a beautiful, irresistible woman calls upon him for help—and Nikolai’s whole world goes up in flames.

Ever since MI5 agent Esther woke to discover her mind taken over with magic, she feels like stranger to herself. She looks to a notorious dragon, one who has the power to help her find her memory. But as she and Nikolai come closer to discovering what really happened to her, a dangerous passion ignites between them. Can this lone Dragon King help the woman he’s grown to love to uncover the truth about her past—or will a deep and fiery danger tear them both apart?

My Review:
This is the 12th book in a series and best enjoyed when you’ve read several of the more recent releases, I think.

To sum up, Dragon Kings are fighting a battle for survival in modern times. They have the ability to shift from human to dragon form, and once ruled the earth, but went into hiding to prevent annihilation from the primitive humans who populated the lands. This decision created a huge rift in the community, and a war ensued. Constantine, the kink of all kings banished Ulrik, another dragon king, for inciting the war.

Nikolai was raised by Ulrik, and he’s always felt it was a deep betrayal to fight against Ulrik to protect humanity. He’s long had issues with his decision, and he wants to make peace with Ulrik. It’s a dangerous time, however, with Light and Dark Fae having devious plots, and a rogue dragon trying to destroy Ulrik, Constantine and the rest of the dragons to assume supreme power over earth and humanity.

Esther is a former MI5 agent whose brother has worked to keep the dragon’s identities secret from society. Esther got tangled up in the midst, having her mind controlled by a powerful Druid. She’s desperate to learn what happened in the three weeks that are missing from her memories. Nicolai has a special gift of sight–he can pluck images from people’s consciousness, even if they can’t remember. He and Esther head to Dublin to trace her paths and see if any patterns develop. In the thick of this they admit they have a ton of chemistry, and are likely to be fated mates.

I’ve really enjoyed the series, and this book in particular is really good. There is convergence between several plotlines at this point so that we can see the impending conflict. Many of the characters have found love, but Con and Ulrik are still single. So I’m expecting some page time to them finding love, as well as defeating the threats from Fae and others. The love story was slower to unfold than I had expected considering Esther and Nikolai have had some close encounters before they set out on their mission. I did love how some of the mystery surrounding the Druid has been cleared up, and it’s clear that most of our “bad guys” aren’t what they seemed to be, at first. Happy endings abound, and the end is clearly near. Looking forward to the next book!

Interested? You can find HEAT on Goodreads and Amazon.

Thanks for popping in and keep reading my friends! Be sure to check out my fellow Coffeehouse reviewers and their fave books of the month below…