Hi there! Today I”m starting a week of teen stories and kicking it off with a book that’s been on my TBR for a long time. GO YOUR OWN WAY by Zane Riley is an odd-couple romance between an angry, abandoned black musical virtuoso, and an out-but-choosy white small-town boy. I read the sequel, WITH OR WITHOUT YOU more than a year ago, and I surely wanted to find out how Will and Lennox got together. 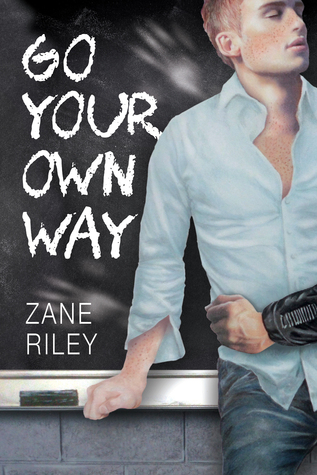 About the book:
Will Osborne couldn’t wait to put the roller coaster ride of his public education behind him. Having suffered bullying and harassment since grade school, he planned a senior year that would be simple and quiet before going away to college and starting fresh. But when a reform school transfer student struts into his first class, Will realizes that the thrill ride has only just begun.

Lennox McAvoy is an avalanche. He’s crude, flirtatious, and the most insufferable, beautiful person Will’s ever met. From his ankle monitor to his dull smile, Lennox appears irredeemable. But when Will’s father falls seriously ill, Will discovers that there is more to Lennox than meets the eye.

My Review:
Lennox McAvoy is nearly 18, and he’s already survived the loss of both parents, 18 months of juvie, and being exiled by his homophobic grandparents. All he needs to do is graduate high school–and then what remains of his family can wash their hands of him. He hasn’t seen his beloved younger sister Lucy in nearly two years–and it kills Lennox that his “guardian” grandfather just dumped him in rural Virginia, in a small town run-down hotel with barely enough allowance to keep the bills paid and some food in his belly. Isolated, Lennox wants to lash out, as he’d done many times before. But, if he doesn’t graduate, he’ll never see Lucy again.

Will isn’t sure what to make of Lennox. There aren’t any out kids at his school, but Lennox is all swagger and dirty mouth. Lennox learns that Will’s out, and takes no time tossing out some crude and poorly-received come-ons. While Lennox’s shell is a tough one to crack, Will does his own investigating, and learns about Lennox’s squalid living arrangements. I comes around the time that Will’s father has a big health setback, and Will needs a distraction from his worries. Lennox is down for that, but their connection grows as they confide more and more in one another.

I need to mention that there’s lots of graphic language, and sex on the page. Both Will and Lennox have troubles they aren’t comfortable confiding. I liked how they do connect, and how Will–who is a genuinely decent kid–sees beyond Lennox’s prickly facade. Lennox is used to losing all his loved ones, and he’s sure that Will will leave him broken-hearted. They are both risking pain, but they find so much more, instead. Will’s encouragement helps Lennox to make new friends, and find allies in their school–including the music teacher who becomes very important in the next books. There’s a lot of healing happening here, and Will and Lennox find more than just comfort with one another.

Interested? You can find GO YOUR OWN WAY on Goodreads, on sale on Interlude Press, Amazon, Barnes & Noble, iTunes, and Kobo.

Meet the author:
Zane Riley is a transgender writer who wrote his first work of fan fiction in the fourth grade. He is a recent transplant to Vancouver, Washington where he spends his time watching long distance baseball games, hiking, and exploring the musical depths of the internet. His first novel, Go Your Own Way came out in 2015 from Interlude Press.

One thought on “Teen Angst GO YOUR OWN WAY–A Review”