Hi there! Today I’m continuing the SMOKING HOT book reviews with a M/M/M menage from Yolande Kleinn. COVET is a bit of a forbidden romance in that it features a love triangle that includes identical twins. O.O 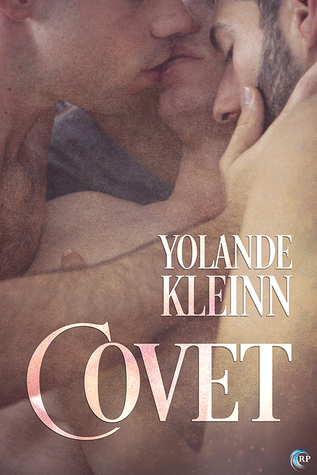 About the book:
Jack Mason—graphic designer and unrepentant player—has never been interested in monogamy. He certainly isn’t looking for romance when he meets Professor Colin Sloan.

Newly single and not looking for anything serious, Colin is intrigued by Jack’s offer of a physical affair with no strings attached. Becoming friends wasn’t part of the plan, but as accidents go, this one’s pretty great.

Peter Mason is Jack’s identical twin. In a long-term relationship himself, Peter tells no one that he’s falling for his brother’s newest favorite, even as the secret creates tension with his girlfriend.

When Peter’s relationship falls apart, he seduces Colin, fully expecting Jack to forgive his transgression. But Jack is keeping secrets too—he hasn’t told even Colin that he’s fallen in love. Suddenly the twins are feuding, and Colin is caught in the middle, blindsided by the revelation that he doesn’t want to choose between them.

Now all three must find a way to share, or they’ll tear each other apart.

My Review:
Jack and Peter Mason are identical twins that share all their secrets…most of the time. Jack is unabashedly out and gay, always looking for his next trick. Peter’s bisexual and engaged to Maureen, his bestie from college. They are both lawyers and work insane hours. Jack develops an interest in the newly-single Colin Sloan, a young professor at the university where they both work, and Peter counsels Jack not to make him a one-and-done…perhaps. Thing is, Colin’s not up for an involved relationship, not after five years with Kyle weer suddenly water under a bridge someplace. Jack’s offer of no-strings open sexytimes, well, it sounded refreshing. And satisfying.

As Jack and Colin continue, however, it becomes clear to Jack that–despite his usual intentions–he’s no longer seeking out other bedmates. And well, he really likes Colin. Jack keeps his feelings secret from Colin, and Jack. Also, now that he’s made it clear there are no strings it’s hard to tie Colin down. Not that Colin’s on the hunt, but, well, it’s a funny thing that he and Peter become good friends. And, it’s a disturbing thing that Peter’s beginning to have sex dreams that star…Colin. These dreams become problematic, when it disturbs Peter’s relationship with Maureen. He feels guilty for having these desires for his brother’s hook-up pal, and can’t confess it to her. Peter’s shame causes him to not speak to Jack, either, and he doesn’t know just how serious Jack has become over Colin. Meantime, Peter’s making more efforts to build his friendship with Colin, and this fuels his lust-filled dreams and fantasies. H

As the months pass, Maureen’s dejected this leads to a reckoning that upsets Peter completely. It’s the catalyst that causes Peter to reach out for Colin, and not in a friendly way. The sexytimes are…brutal, and cathartic. The ripple effect is catastrophic. Jack won’t have any part of Peter poaching his man, no matter how apologetic Peter is. THis detente leaves Colin’s caught in the middle of their cold war, and that makes him recognize, well, that he’s not opposed to being in the middle between these sexy twins if they’re feeling amorous.

The book is H.O.T. with sexytimes that go on. And on. I enjoyed the interplay between Jack and Peter, and how Colin wound both of them around his fingers without even trying. Colin’s has some deep trauma with Kyle walking away–and he loves feeling desired. It’s nearly an addiction for him. That Jack and Peter both want him? It fills that self-esteem void he’s living through. As far as the romance, this one doesn’t follow the formula. There’s so many secrets, and heartbreak, but they seem to work it out. Colin loves to be shared, and jack and Peter’s mix of tender and touch loving seem to fit all of them in a “just right” way. Once the boundaries are secured, they each make the steps that bring all of them closer. The end is a satisfying connection that allow Peter and Jack to have their man, and maintain their brotherly relationship. No taboo parts, and no twincest. Just a bit of Colin being shared and enjoying the heck out of it.

Interested? You can find COVET on Goodreads, Riptide Books, Amazon, Barnes & Noble, iTunes and Kobo. I read a review copy provided by NetGalley.