Hi there! Keeping with my pre-Halloween “weird” theme, I’m sharing a review for a soon-to-be-released YA adventure romance from Cat Jordan. EIGHT DAYS ON PLANET EARTH is the story of a boy who’s given up on space-stories…then finds a supposed “alien” girl on his property.

The book releases 11/7, but you can scroll down and pre-order it today! Also, enter the giveaway to win 1 of 3 $10 Amazon GCs or one of two signed copies of the book. 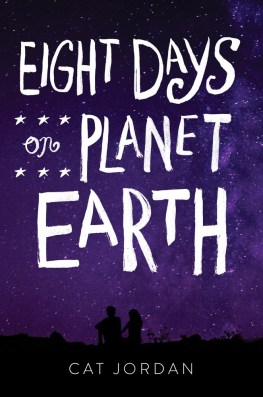 To the universe, eight days is a mere blip, but to Matty Jones, it may be just enough time to change his life.

On the hot summer day Matty’s dad leaves for good, a strange girl suddenly appears in the empty field next to the Jones farm—the very field in rural Pennsylvania where a spaceship supposedly landed fifty years ago. She is uniquely beautiful, sweet, and smart, and she tells Matty she’s waiting for her spaceship to pick her up and return her to her home planet. Of course she is.

Matty has heard a million impossible UFO stories for each of his seventeen years: the conspiracy theories, the wild rumors, the crazy belief in life beyond the stars. When he was a kid, he and his dad searched the skies and studied the constellations. But all of that is behind him. Dad’s gone—but now there’s Priya. She must be crazy…right?

As Matty unravels the mystery of the girl in the field, he realizes there is far more to her than he first imagined. And if he can learn to believe in what he can’t see: the universe, aliens…love…then maybe the impossible is possible, after all.

A heart-wrenching romance full of twists that are sure to bring tears to readers’ eyes, from Cat Jordan, author of THE LEAVING SEASON.

Matty Jones is a high school junior on summer break when two things happen on the same day:  his unemployed UFO conspiracy-theorist father walks out, and a strange girl claiming to be an alien appears in the fallow field on his family’s defunct farm. Matty’s furious with his dad, a man who’d been slipping away from his responsibilities for years. His mother is devastated, but Matty had seen this coming.

Matty had grown up knowing that his dad was big into space and UFOs. It was local legend that an alien aircraft landed in their field on the night his father was born–but the government washed away the evidence. Still, Matty and his dad spent ages outside on the their twin telescopes searching the night skies for something out there. His dad blogged, and over the past few years the tenor of the blog had shifted from informative to conspiracy-oriented. Along with this, his dad pulled away from Matty and his mom–even going so far as to have affairs with some of his ardent blog followers. Matty thinks good riddance to his slacker dad, and is frustrated that his mom even harbors any hope he’ll return.

Meanwhile Priya, the “alien” in his field, is busy collecting data about Earth. Her home planet, she reveals, is deep in the Libra constellation, and Matty’s too lonely and downhearted to simply brush her off. He wants to believe that Priya is a confused girl who’ll move on soon–like all the other UFO lunatics his father had ginned up over the years. But, there’s clearly something wrong with Priya–she is dressed bizarrely–in a tutu and wearing a platinum wig over her dark hair–and has trouble with balance that she ascribes to differences in Earth’s gravity. She can read Matty’s thoughts, and it unsettles him. She also struggles with language, and he thinks maybe she’s from a different country, completely discounting the notion that she’s possibly an alien.

She’s still in his field the next day, and the next, and the more time Matty spends with her, the more he wants to be near her, even as she resurrects good memories of time spent with his dad. The conflict is real for Matty, but so is the compassion. He and Priya share some intimacy over this time, each night watching the skies for her ship to arrive and whisk her back through the wormhole to her planet.

Matty’s friends draw attention to Priya’s weirdness, and it leads to the big crisis and reveal of Priya for exactly who she is. It’s a good and honest twist, that breaks Matty’ s heart while at the same time restoring the abandoned bond between himself and his father. Though that makes it sound a lot more complicated than it is. At it’s core, this is a story about a boy falling for people who leave him behind, and learning how to deal with that. Matty is a strong character, a good guy who felt real. He’s not perfect; he’s a slacker like his dad, and plans to spend his summer riding dirt bikes, visiting the beach and getting high with his best friend. His encounters with Priya open his eyes to the wonder of his mundane life, and foster a new sense of purpose that he may, or may not, pursue.

The truth of it is, there are mysteries in this world that can’t be explained completely, and must be taken on faith. Gravity, Priya asserted, was one of those. Love, as Matty learned, was another. It’s a sweet book, with a heart-tugging resolution that fans of YA will really enjoy.

Interested? You can find EIGHT DAYS ON PLANET EARTH on Goodreads and pre-order it in advance of its 11/7 release on Harper Collins, Amazon, Barnes & Noble, Books-A-Million, and Indie Bound.

Click on this Rafflecopter giveaway link for your chance to win 1 of 3 $10 Amazon GCs or one of two signed copies of the book.
Good luck and keep reading my friends!

About the Author In Cat jordan’s words…

When I was a teenager, the very first book I ever tried to write was pretentious and stilted and set in a future where there was no paper. Obviously, I fancied myself another Ray Bradbury (who I was thrilled to meet not once but twice!). The book had an awesome title and no plot but I had the most fun creating the characters and the world they lived in. That to me is the most enjoyable part of writing a novel: envisioning a world and populating it with all kinds of people and dogs. Gotta have a dog.

The worlds I create now as an adult are based on my travels from coast to coast in the US, to Europe and Mexico and Canada, and on the people I have met and loved and admired and feared. And dogs.

Currently I live in Los Angeles. With my dog.

2 thoughts on “Stranger-Danger? EIGHT DAYS ON PLANET EARTH–Review and Giveaway!”