Hi there! Today I’m sharing a review for a new contemporary romance from Cristin Harber. JAX is a standalone story that features some characters from her Titan, Delta and Only series, and sure to have lots of suspense and action. While I didn’t meet any of my fave characters from LOCKE AND KEY, I still enjoyed this unexpectedly tender spin-off story. 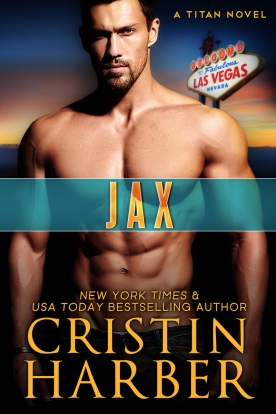 About the book:
Seven is an enigma. A motorcycle club princess. The daughter of a notorious gangster. The best friend of the deputy mayor. A coffee shop owner. The single mom of two young, adopted children. She’s colorful, in every way possible—from her attitude to her piercings and bright pink hair—and she’s a woman on a mission with the power to help broker a clean break between a powerful motorcycle club and a South American drug cartel. But not all players are ready for the game to change, including the ones she can’t see like the CIA.

Jax Michaelson has a bad attitude and a good shot. The former Navy SEAL has been on Titan’s problem list for running his mouth since the day he showed up for work, but he does a hell of a job, and they’d never let him go. Call him cocky, that’s fine, because then you’d have to admit he’s the best at anything and everything—except diplomacy.

When Titan is forced into the seedy drug world filled with cartel glitz and Harley-riding MCs, Seven and her family become an unexpected bargaining chip right after she and Jax find a way to stand each other—in bed.
Will friends become lovers? Or are they too far gone to be opposites that attract? Is Jax nothing but a bad boy who leaves her hoping for a military hero when the burden of living as Mayhem royalty backfires and her children disappear.

JAX is a standalone romantic suspense novel by New York Times bestselling author Cristin Harber. It features characters from the Titan, Delta, and Only series, but readers do not have to have read those books to enjoy this one. There’s a guaranteed happily ever after and no cliffhanger! Enjoy!

“What kind of name is Jax?”
“Probably the easiest thing my ma could think to shout when she heard she was having a boy. It stood out on a block of Dons and Johns.”
“Your neighborhood was filled with porta-potty kids?”
Her humor made him grin. “Guess so. But that was back in the day. Who cares? This place makes me realize I don’t know much about you.”
She sucked her cheeks in thought. “I don’t think you’re always a jerkface.”
“Good to know, princess. ” He gave her a lingering once-over. ” I don’t think you’re always… I’m coming up blank.” Or at the very least, he was having a hard time thinking of an appropriate comparison.
It was too dim to see her blush, but she ducked her chin as though she were. After a second that strung between them for miles, Seven regained her unaffected composure. “I slapped you. I think you can come up with at least one thing.”
The memory ran to his groin, and Jax rolled his bottom lip into his mouth, letting go with a slow breath. Her slap hadn’t been just a no. It had been a hell no with style. She’d rejected his proposition, but he wasn’t positive she was rejecting him.
“Sweetheart, I liked that.”
Tension crackled in the few feet between them. The hairs on his skin stood as he waited to see what she would do next, what she would say, and how he would volley it back.
“Don’t flirt with me right now,” she whispered. “I need a favor.” She eased back onto the desk as though she owned the place, crossing her legs.
“Isn’t that the best time to flirt?”
Seven rolled her eyes, but she smiled liked the devil sipping sweet tea.
“Careful, beautiful.”
A thick wave of magenta hair fell over her cheek, obscuring half her face. “Careful or what?”
Her pink fucking hair was ridiculous but artistic, not too serious. She was like splashes of colors sprinkled with surprises—tongue stud, eyebrow jewels, and a name like Seven.
Jax had no idea what to do about that. “You want to have that conversation right now?” He set the smoothie on the ground. “Because if you want to try again, I’ll dole out whatever consequences we agree to.”
Seven’s tiny, unexpected gasp made a shiver of anticipation roll through his muscles. Even if Jax hadn’t been trained to pick up on microchanges in human behavior, he would’ve noticed how her breaths quickened despite her best effort to disguise the natural reaction. Jax wanted to feel her pulse, needed to know how far she would let him push her, how much she would trust him.

My Review:
Jax Michaelson is a Titan agent attending the wedding of his colleague, Ryder, when he meets Seven again. Motorcycle princess of the Mayhem MC, Seven didn’t quit the club that destroyed her family life, even when her father–the former prez–when to prison for drug trafficking. In fact, knowing that the club is trying to get out of the drug game altogether spurs Seven to call on Jax for help. See, breaking loose from a Colombian cartel takes mediation a MC just doesn’t have, but Titan does.

Jax has been interesting in Seven, her sild hair, piercings and indomitable attitude, for a while. But this reconnection has taught him she’s more than her facade. She’s a business-owner, who’s caring for her ailing mother, and has adopted two kiddos after their mom OD’ed and their dad went to jail. She’s determined to make a good and solid life, and needing a man isn’t on her to-do list. Still, her assistance to Mayhem’s cause draws her into a tight circle with Jax, and the attraction flares. When in Bogota–and also Vegas–it’s a connection she doesn’t want to fight. Even when it irrevocably changes their situation. Especially the Vegas nights. Shenanigans ensue…

The vibe from the book is tension. Seven has a nervous tic for folding/refolding items in her environs when she’s nervous, so expect lots of folded table linens, sheets, blankets and origami. Also, expect Jax to be more than the surly ex-SEAL with a chip on his shoulder. We get a real deep look at a man who loved and lost young, and never thought he’d make himself vulnerable again. The situation with the MC-cartel is only further inflamed by Seven’s ex-husband, Johnny, and her own father–neither of whom want the drug trade to disappear. It’s about business fr one, and pleasure for the other. This leads to some harrowing times as Seven’s new family gets torn apart and Jax is her rock and rescuer. Jax, working with Titan to settle this situation for Mayhem, gets an unexpected opportunity to correct wrongs from his youth, and that closure means a lot.

For me, the story is a little busy, and it’s sometimes hard to remember who is who. Plus, these folks seem to have 27-hour days and 13-day weeks, because they have time for stuff I can’t even imagine, and I’m a workaholic insomniac. That said, if the time frame were at all realistic, I’d have loved the story. Seven’s a stand-up gal who protects her own, even at her own expense, and Jax is a man of principle who isn’t afraid to get dirty (or be dirty) for the people he treasures.