Hi there! Today I’m so excited to share a release day review and giveaway for the next book in Kristen Proby’s Fusion contemporary romance series. THE BEAUTY OF US is the fourth book in this series and features a romance for Riley, one of the five friends who own and run their sultry restaurant, Seduction. I’ve really enjoyed the other three books, LISTEN TO ME, CLOSE TO YOU, and BLUSH FOR ME so I couldn’t wait to read on.

There’s an excerpt and book giveaway below! 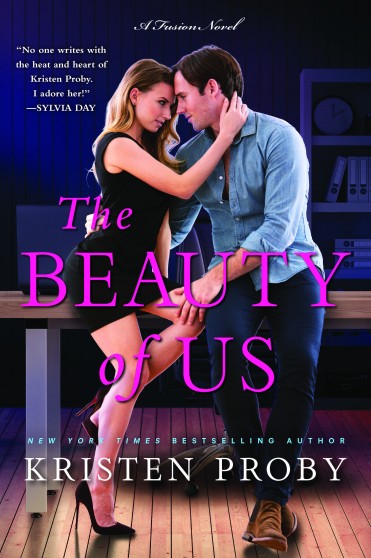 About the book:
New York Times bestselling author Kristen Proby delivers another sizzling novel in her delectable and sexy Fusion series.
Riley Gibson is over the moon at the prospect of having her restaurant, Seduction, on the Best Bites TV network. This could be the big break she’s been waiting for. But the idea of having an in-house show on a regular basis is a whole other matter. Their lives would be turned upside down, and convincing Mia, her best friend and head chef of Seduction, that having cameras in her kitchen every day is a good idea is daunting. Still, Riley knows it’s an opportunity she can’t afford to pass on. And when she meets Trevor Cooper, the show’s executive producer, she’s stunned by their intense chemistry.

Trevor’s sole intention is to persuade Riley to allow Best Bites TV to do a show on her restaurant. But when he walks into Riley’s office, he stops dead in his tracks. The professional, aloof woman on the phone is incredibly beautiful and funny. But can he convince her that he’s interested in Riley for himself? Or is he using the undeniable pull between them to persuade her to agree to his offer?

How about a yummy taste…

“There seems to be an explosion in the jackass population,” I reply, and sigh, passing my glass to Kat for a refill.

“Where are you meeting them?” he asks, and I bite my lip.

“Didn’t have to. If you met him at the gym or the grocery store, or somewhere else in person, you wouldn’t be embarrassed.”

“Yes, you are. Otherwise, you wouldn’t mind telling me.”

“Fine.” I sigh and rub my forehead with my fingers. “I met them online.”

“I don’t know where else I’d meet people,” I reply. “I’m at work at least fifty hours a week. I don’t do school or clubs or church, and I rarely go to the grocery store because I always eat here.”

“I could stop feeding you,” Mia interjects and I toss her a glare.

“I don’t understand any of the words you just said.” I squint at him, trying to process.

“Switch it up,” he says with a grin. “Try to meet people somewhere else. I mean, you didn’t meet me online, and I’m not an asshole.”

“Sure, you’re cute, and you look like you have your shit together, but I suspect that once I got to know you I’d learn that you have mommy issues and fourteen dogs.”

“You might,” he says with a thoughtful nod. “I do hide those things well. All I’m saying is, stop using the dating sites and try meeting people in real life.”

“Yeah. Easy for you to say.” I pout into my wineglass. “Do I need to send you some money for this counseling session?”

“Nah, the first one’s on me,” he says, tossing that crazy-hot smile at me again. “Just don’t combine Star Wars and Star Trek anymore and that’s payment enough for me.”

He pulls a few bills out of his wallet and tosses them on the bar, then stands to leave.

“Have a good night, and good luck,” he says.

“Trevor,” he says, and my stomach immediately does at least four cartwheels. “Trevor Cooper.”

“You’re early,” is all I can think to say. My cheeks burning, my fingertips immediately tremble. “You’re not supposed to be here for two more days.”

“I like to come early. Get the lay of the land, that sort of thing.” He smiles and waves. “See you in a couple of days.”

He walks away, and as soon as I hear the front door close, I turn to my friends and just stare at them in utter horror.

“Tell me that didn’t just happen.”

My Review:
Riley is a marketing exec working with her four best friends at their jointly-owned cabaret bar/restaurant Seduction. She’s just convinced all the partners that a food television special would help boost Seduction into the upper echelon of restaurants, and feels really good about their prospects. In fact, her professional success is far more assured than her personal success as Riley’s suffered many a bad date. She’s pretty much given up on finding a decent man. While lamenting it one night at the bar, a stranger offers some sage advice–and Riley’s mortified to learn that this gentleman of wisdom is the producer of the network special, Trevor Cooper.

Trevor is a 37 year-old divorced man whose had his share of difficult relationships. His ex-wife was a two-timer and he’s still reeling from that betrayal. He finds Riley to be attractive, but he wants to keep things professional. However, he sees how disappointed she is by the schlumps she dates and decides to offer her one “perfect” date so she can experience a fun night out with a decent man. And, then Trevor’s caught: he wants more.

Only, Trevor is only supposed to be in Portland for a few weeks while he films the Seduction special. It’s not long enough to build anything real, is it?

Riley and Trevor make the most of their short time together, soon deciding that they might need to take this relationship into long-distance mode, but that’s not really where their hearts lay. And, it’s complicated by some (over-the-top) dramatics by two women in Trevor’s past. For me, that was a bit messy–and unrealistic–and those interactions are the capstone of Riley’s issues with separation. She needs direct communication, on the regular, and Trevor’s inability to provide it leads Riley to stand up for herself and make a painful choice. I liked how she stood on her own, rather than caved for a poor substitute of her needs. Riley’s a strong gal, and she knows her worth. Meanwhile, Trevor made an abrupt shift into “Clueless” the second he boarded his plane for LA. Not that he didn’t get a clue when his pals stepped into the picture and pried his eyes wide. And, his grand gesture was pretty sweet.

There’s lost of love and sexytimes packed into this shorter novel, and fans of the series will love this return to Seduction and the sexy gals who run it. It’s the fourth book in the series, but reads well on its own. And, the end sets up the final book–romance for snarly chef Mia–with a dramatic flair. I’m really looking forward to reading it!

Interested? You can find THE BEAUTY OF US on Goodreads, Amazon, Barnes & Noble, iTunes, and Kobo.

Click on this Rafflecopter giveaway link for your chance to win autographed copies of LISTEN TO ME, CLOSE TO YOU and BLUSH FOR ME.
Good luck and keep reading my friends!

New York Times and USA Today Bestselling Author Kristen Proby is the author of the popular With Me in Seattle series. She has a passion for a good love story and strong characters who love humor and have a strong sense of loyalty and family. Her men are the alpha type—fiercely protective and a bit bossy—and her ladies are fun, strong, and not afraid to stand up for themselves. Kristen spends her days with her muse in the Pacific Northwest. She enjoys coffee, chocolate, and sunshine. And naps.