Hi there! I’m so excited to share a review for a new paranormal M/M romance releasing tomorrow from Gail “G. L.” Carriger. THE SUMAGE SOLUTION, the first in a new San Andreas Shifters series, is a contemporary story which is very different from the previous books of hers that I’ve read, and I loved what she brought to the this genre. I got hooked on Gail’s YA steampunk books (Manners and Mutiny, WAISTCOATS AND WEAPONRY) and her Victorian adult romances (ROMANCING THE INVENTOR) among many others, but a M/M romance with mages and shifters and an analogue of the California DMV? I was thrilled!

Catch my exclusive excerpt and a short interview below, too. 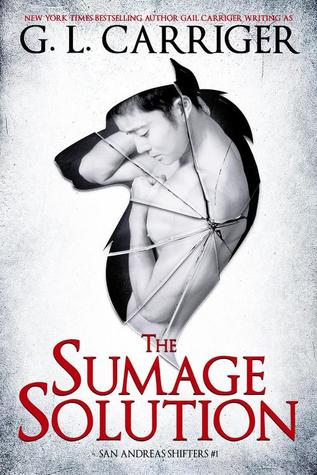 About the book:
Can a gentle werewolf heal the heart of a smart-mouthed mage?
NYT bestseller Gail Carriger, writing as G. L. Carriger, presents an offbeat gay romance in which a sexy werewolf with a white knight complex meets a bad boy mage with an attitude problem. Sparks (and other things) fly.

Max fails everything – magic, relationships, life. So he works for DURPS (the DMV for supernatural creatures) as a sumage, cleaning up other mages’ messes. The job sucks and he’s in no mood to cope with redneck biker werewolves. Unfortunately, there’s something oddly appealing about the huge, muscled Beta visiting his office for processing.

Bryan AKA Biff (yeah, he knows) is gay but he’s not out. There’s a good chance Max might be reason enough to leave the closet, if he can only get the man to go on a date. Everyone knows werewolves hate mages, but Bryan is determined to prove everyone wrong, even the mage in question.

Set up: Our werewolf main character, Biff, is stuck in the DURPS waiting room (kind of like the supernatural version of the DMV) when trouble brews between two other shifters…

Biff didn’t think a bear shifter could change during daylight, not without his pelt, but they were anger-triggered. And this was an aggravating environment. He wondered if the guy was an Alpha.

So, Biff sat and waited patiently, tried not to sneeze, and kept his eye on the twitchy Norse god in front of him.

It got physical way faster than Biff thought it would. Frankly, he didn’t think DURPS was as prepared as it should have been either. For quintessence attack, yes, but not for a physical confrontation.

The berserker must have taken offense to something the barghest said or did, because the dog shifter suddenly had a fist in his face. Since both were confined to human skin by the sun, it quickly became a two-man punch-and-grapple match…in the waiting line of a government department. The Plugs at the doors had no idea what to do. They were trained for mage casts and shifting forms, not macho idiots.

He wasn’t sure it would work. After all, he was a wolf, wrong species.

He moved in closer.

Biff reached up and grabbed each man by the scruff of his neck. It worked great on the pups in his old pack. Then he shook them gently, grip firm and slightly on the edge of pain.

“Be still,” he barked, and pushed at them with his Beta power. Settle.

Touch was good, touch helped. It usually did. Biff centered himself, grounded himself, shooting out calmness like a weapon. Blanketing them with it, as those little flowers had blanketed the parking lot when he arrived.

Some thoughts from Gail Carriger:

What brought you into this world/story?
This is one of those books that woke me first thing one morning and just HAD to be written. I was supposed to be taking a break between contracts, but Max’s voice in my head was so strong and demanding. Max is Biff’s love interest in The Sumage Solution, and he is kinda *like* that – demanding. I shouldn’t have been surprised.

If you could have any paranormal ability, what would it be?
Ooooo. Well I always wanted gills, so I’m going with mermaid. Plus the way I have merfolk set up in the San Andreas Shift universe the species is female dominated, lives in pods, mostly deals in subverting organized crime (off shore accounts, you see), and assists the coast guard. I’m down with all those kinds of shenanigans.

Stranded on a desert island–three books you’d need to maintain your sanity until rescue…
My first and forever answer is THE FORGOTTEN BEAST OF ELD by Patricia McKillip. My second choice (if I’m allowed to take a series) is the DAUGHTER OF THE EMPIRE trilogy by Raymond Feist & Janny Wurts. Finally, right now, I’m picking a new comfort read. I’ve really been into m/m romance (obviously, since I just wrote one) and I love sci-fi and culture clashes so I’d take CLAIMINGS, TAILS, AND OTHER ALIEN ARTIFACTS by Lyn Gala because it has all three of these things plus a little dose of BDSM if one bends in the kink direction. I feel like this is a good spread across all my different tastes and preferences as a reader, and would keep me occupied until rescue.

My Review:
Bryan, called Biff by his packmates, is a wolf shifter whose small pack of gay-spectrum wolves has relocated from the east coast to the San Fran Bay area. Biff is a beta wolf, and in this world it means he’s the patient one, the one who assists the alpha in negotiations and keeps the peace. His younger brother is his alpha and they pretty much fled the homophobia and heartache of their previous pack once his brother came out and took a merman as his mate. So, Biff knows his pack would accept him if he came out as gay–but he’s still a private kind of guy, and he doesn’t want to have the pack watching/gossiping about his every step.

Biff meets Max when he goes to the local DURPS office–imagine an agency like the DMV, only serving paranormals and ten times pettier–to register their pack and help get them permanent housing. Right now, there are seven werewolves and a merman taking refuge in the two bedroom apartment of the traveling drag queen friend of their beloved house ghost. (So, you can see there’s lots of shenanigans happening…) Max is a sumage, kind of the opposite of a mage in that he absorbs the magical resonance of actual magic wielders instead of turning his own tricks (ba-da-bum). It was the final disappointment to Max’s powerful and power-hungry mage father, long dead and little missed in the ensuing ten years. Max works at DURPS as another slam on his dear-old-dad, and makes no effort to tamp-down his gayness, either.

Max and Biff have an immediate attraction, and it is this which tips Max into accepting Brian’s number, calls, and request for a date. It seems like everything is going fine, even if Bryan is confused why Max won’t reveal his body to him–at first, and sets off the first bit of conflict. What I loved about the book is Bryan’s steadfastness. Max is used to abuse and scorn, and he can’t believe that Bryan could possibly find him attractive–sumages have distinct body issues and Bryan’s careful love helps Max regain his absent self-confidence. Also, there are some unique and different challenges that present themselves as Bryan and Max begin to build a life together–not least of which is Bryan’s protective Alpha brother. There are mages out for artifacts in Max’s father’s home, and protecting those potential weapons brings forth Max’s true power–shocking everyone.

I don’t want to reveal too much of the plot, because it’s fantastic and so very different, but I want to mention that it’s got the same fast-paced, witty movement as all the other books I’ve read by the author. I couldn’t turn the pages fast enough. Bryan and Max have some emotional set-backs that they need to work through, but they do that very well, and the book ends with an HEA. There’s some yummy sexytimes, too!

Interested? You can find THE SUMAGE SOLUTION on Goodreads and pre-order it in advance of the 7/18 release on Amazon.

About the Author:
Gail Carriger writes comedies of manners mixed with paranormal romance (and the sexy San Andreas Shifter series as G.L. Carriger). Her steampunk books include the Parasol Protectorate, Custard Protocol, Supernatural Society, and Delightfully Deadly series for adults, and the Finishing School series for young adults. She is published in many languages and has over a dozen NYT bestsellers. She was once an archaeologist and is fond of shoes, octopuses, and tea.

One thought on “New Beginnings With THE SUMAGE SOLUTION–Review and Exclusive Excerpt!”